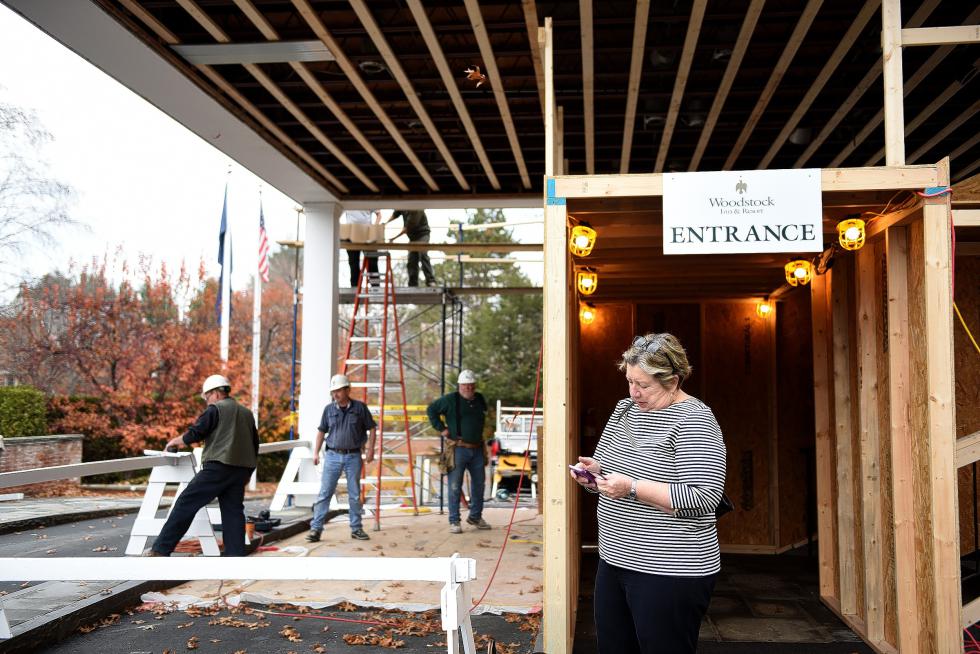 Margherita Verani, of Londonderry, N.H., checks her phone while waiting for her car at the Woodstock Inn & Resort on Nov. 6, 2015. Verani had been attending a real estate meeting with her husband at the inn. Renovations have begun at the inn in Woodstock, Vt. (Valley News - Jennifer Hauck) <p><i>Copyright © Valley News. May not be reprinted or used online without permission. Send requests to permission@vnews.com.</i></p> 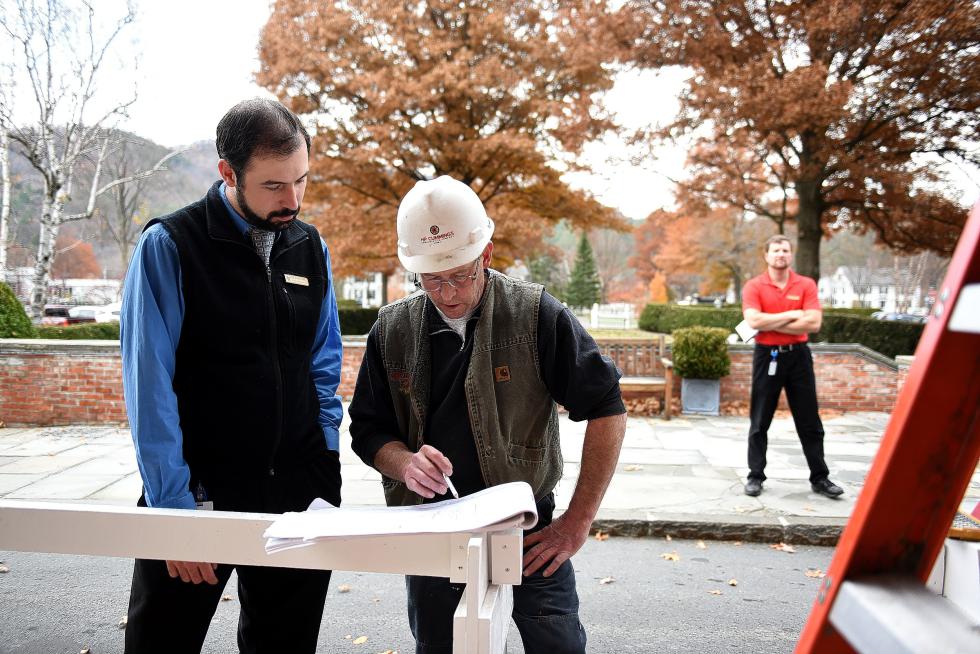 Woodstock Inn & Resort Front Office Manager Taolan Meyers looks over the new lighting design for the porte cochiere at the inn with Field Superintendant Kevin Keith of H.P. Cummings on Nov. 6, 2015 in Woodstock, Vt. Renovations have begun on the inn. (Valley News - Jennifer Hauck) <p><i>Copyright © Valley News. May not be reprinted or used online without permission. Send requests to permission@vnews.com.</i></p> 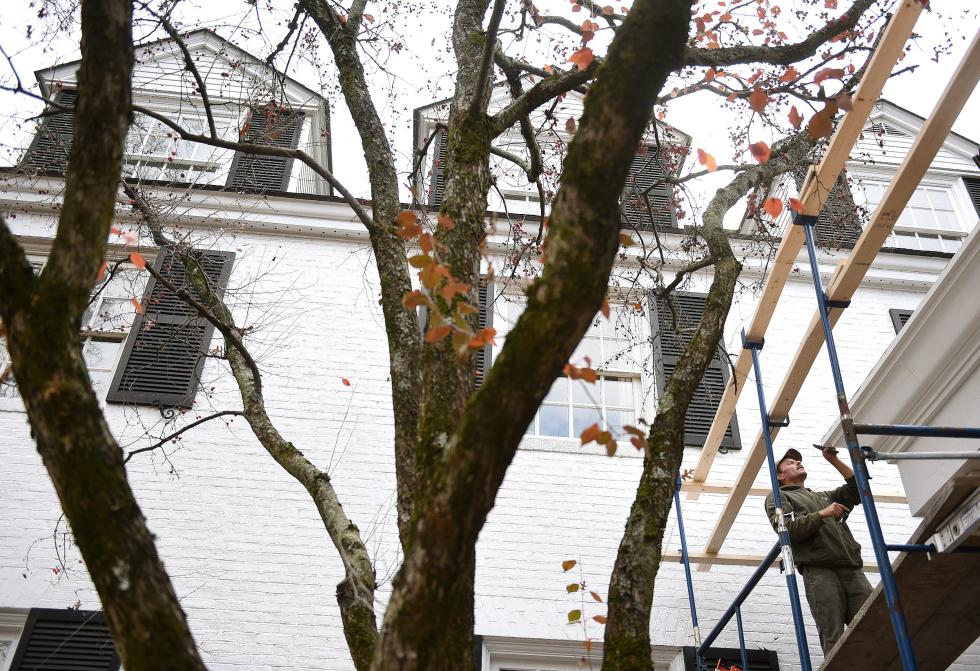 Renovations have begun at the Woodstock Inn & Resort. Mike Charron was doing work on the porte cochiere at the inn on Nov. 6, 2015 in Woodstock, Vt. (Valley News - Jennifer Hauck) <p><i>Copyright © Valley News. May not be reprinted or used online without permission. Send requests to permission@vnews.com.</i></p>

The Woodstock Inn and Resort, undertaking its first major infrastructure project since the opening of its spa in 2010, has begun a $2.6 million upgrade to the building and grounds aimed at giving the luxury hotel’s entrance and lobby a more welcoming atmosphere and sense of unhurried elegance.

Calling the upgrades “part of our long-term vision in how we want to position the Woodstock Inn for the future in the marketplace,” President and General Manager Gary Thulander said the two-stage project encompasses “enhancements” to the exterior arrival area as well as renovations of the lobby and library designed to “better reflect” the hotel’s Federal-style design and New England heritage.

Work has already begun on the exterior arrival area that will involve removing the brick wall that bounds the courtyard to allow a sweeping view of the front lawn and Woodstock’s Village Green, along with flourishes to the “porte-cochere,” the porch-like structure over the entrance that shelters visitors as they get in or out of their vehicles, such as a gas-lit chandelier and new molding. The exterior work is expected to be completed in December.

Phase two of the upgrade, which run from February to April, will involve remodeling the lobby, doubling the seating in front of the fireplace and refurbishing the library with more casual seating and reading lamps.

“It’s going to be a true library,” Thulander said, designated as a “quiet area” for hotel guests.

The reception counter that is typical of most hotels — which Thulander described as “a wall between our employees and our guests” — will be removed and guests will instead register at two “partner desks” set up in the lobby to create a more personal reception.

The expanded seating capacity in front of the fireplace will be accompanied by a cart offering wine and Vermont cheeses that is intended to draw both guests and community members as a meeting and conversation alcove.

Ellen Pomeroy, chair of the Woodstock Foundation, which owns the 142-room inn, said in a statement that upholding resort founders Mary and Laurence Rockefeller’s “vision for the Woodstock community … requires that the resort continue to invest in improvements that will allow it to remain competitive with an increasingly discerning clientele.”

The resort will be open and fully operational throughout the project. During the spring phase, the Red Rooster restaurant will be moved to the Rockefeller Dining Room, and the main entrance to the hotel will be in the Tavern Wing valet area on South Street.

Thulander called the infrastructure upgrades the latest in a “progression” of changes and offerings designed to help the Woodstock Inn compete in the high-end resort market. Among the “programming” and “branded partnerships” the resort has introduced in recent years has been Kelly Way Gardens, 2.5 acres of growing beds to supply the hotel’s chefs with an assortment of farm-to-table produce; the Tubbs Snowshoes Nordic Adventure Center, with a network of trails for cross country skiing and snowshoeing on Mount Tom and Mount Peg; and New England Falconry ($180 per person for 90 minutes to “experience handling and flying” a trained hawk).

Down the road, Thulander said, one of the ideas on the drawing board is to introduce “signature suites” for guests to incorporate the sensibility and tastes of the Rockefellers or such famous guests as Lady Bird Johnson, wife of President Lyndon B. Johnson.

“The suites would be designed and laid out in a style that reflects that person, a way to really get in their world. That could potentially be the next step,” Thulander said.