Considering a Tiny Home? Try Before You Buy 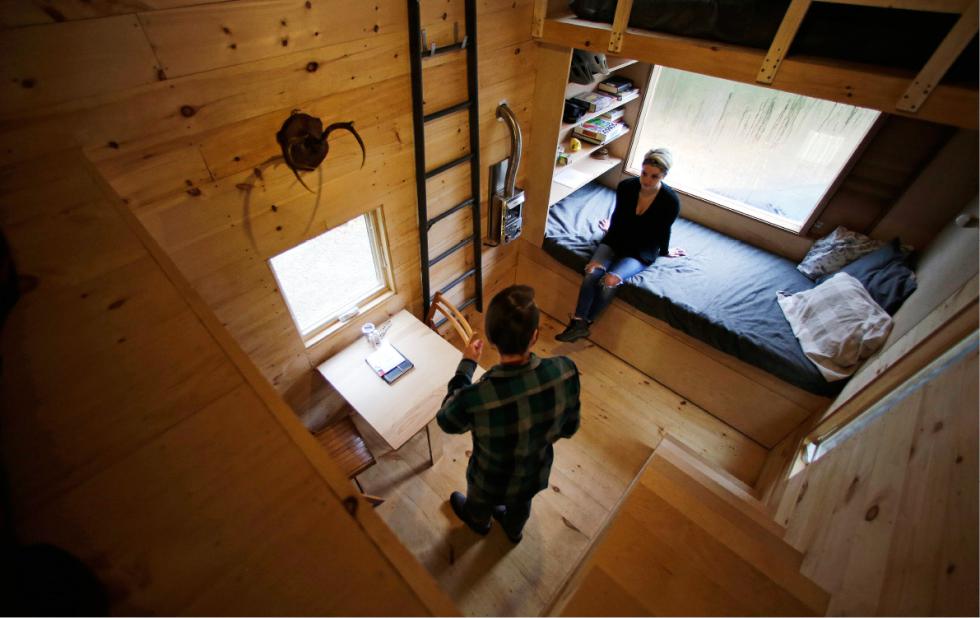 In this Tuesday, Oct. 20, 2015 photo, Shane Lentz, of Pittsburgh, Pa., and his wife Hilary, talk before leaving a tiny house, which they rented for a weekend, in Croydon, N.H. As the tiny house phenomenon sweeps the nation, Harvard's Millennial Housing Lab thinks a tryout is in order for people toying with radically downsizing their lives. Its new "Getaway" project gives the curious an opportunity to spend a night or two in one of three tiny houses and get a real feel for the lifestyle before taking the plunge. (AP Photo/Charles Krupa) 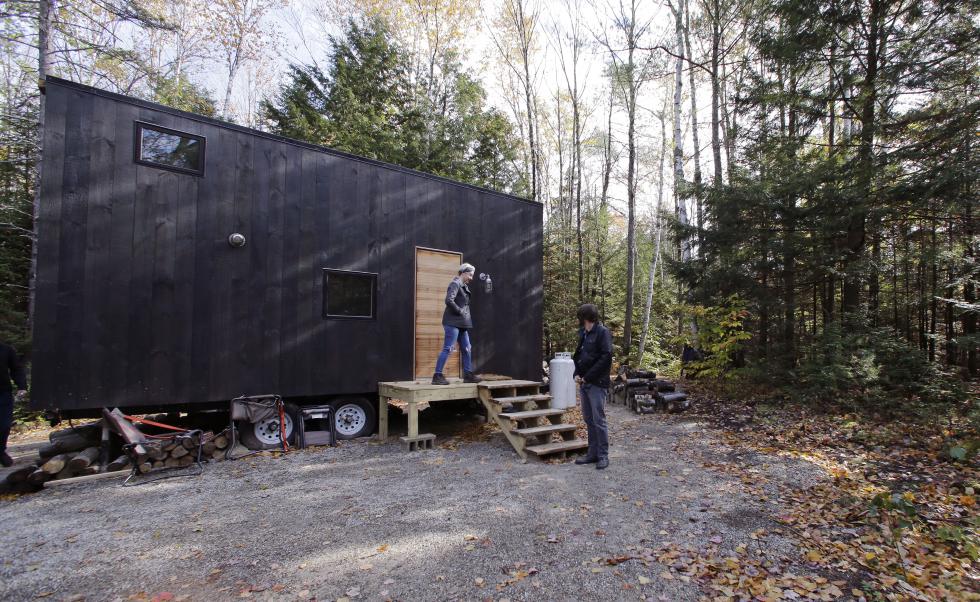 In this Tuesday, Oct. 20, 2015 photo, Hilary Lentz, of Pittsburgh, Pa., and her husband Shane leave the tiny house which they rented for a weekend in Croydon, N.H. As the tiny house phenomenon sweeps the nation, Harvard's Millennial Housing Lab thinks a tryout is in order for people toying with radically downsizing their lives. Its new "Getaway" project gives the curious an opportunity to spend a night or two in one of three tiny houses and get a real feel for the lifestyle before taking the plunge. (AP Photo/Charles Krupa)

Croydon — Hilary and Shane Lentz were hooked on the idea of a tiny house, but they weren’t sure the reality would be so appealing.

Their curiosity led them to the hills of New Hampshire, where a business that started at Harvard University rents out tiny houses for $99 a night. The company, Getaway, has drawn visitors from afar who come to sample life in a 160-square-foot house before they dive headlong into the lifestyle.

“It’s a way to test-drive tiny house living,” said Jon Staff, the founder and CEO of Getaway. “We operate them a little bit like hotel rooms in the woods.”

Across the country, more businesses are letting the curious try out tiny living. Caravan, a hotel in Portland, Ore., offers six tiny houses ranging from 84 to 170 square feet, for $145 a night. Dozens of tiny houses are available through vacation rental websites, posted by their owners.

Definitions vary, but some say a tiny house is anything smaller than 400 square feet. Advocates tout the environmental and financial perks of tiny living.

The Lentz couple, from Pittsburgh, had been considering a major downsize for years. It could free them from the mortgage on their three-bedroom home. They could build the house on wheels and take it anywhere. By shedding some belongings, there would be fewer distractions.

“Having a smaller living space allows you to be more open to experiences, and to really enjoy your day to day life,” said Hilary, 27.

But the couple had a few lingering questions. Shane, 29, wondered whether waterless toilets, a common feature in tiny houses, were odorless, too. They both worried about cooking in a tiny kitchen. Hilary wanted to know whether the coziness would fade to isolation.

Getaway is the first project at Harvard’s Millennial Housing Lab, a group of business, law and design students exploring new housing ideas. Staff, a graduate student in business, said his stints living on a boat and in an Airstream trailer inspired him to help spread the tiny house movement.

“Small spaces force you out into the world, and I think that’s a good thing,” he said.

Backers of tiny living say the movement is growing, and certain areas have become hotspots. Villages of little homes have popped up in cities like Portland and Seattle. Other cities have considered relaxing their zoning rules to open the door for more tiny houses.

But industry experts say it’s hard to pinpoint actual numbers behind the trend. In an annual survey, the National Association of Realtors found that the share of home buyers who opted for houses of less than 1,000 square feet has stayed at about 1 percent for the past five years.

“The data is revealing that the tiny-sized home is not what people will consider the American dream,” said Lawrence Yun, the association’s chief economist.

He predicts that the growth of big cities will fuel demand for smaller apartments and condos, but not stand-alone houses.

Either way, tiny houses have caught the public’s attention as the subject of TV shows and documentaries. Popular websites entice audiences to ogle at small houses in bucolic landscapes. Some cities are exploring tiny houses as a tool to fight homelessness.

The Lentz couple signed up for a rental as soon as they heard online about Getaway. They spent the weekend in a wood-paneled house the size of a shipping container, powered by solar panels. The only water came from a 110-gallon tank. Its composting toilet required a spritz of water from a spray bottle after use.

During their tryout, the Lentzes played board games and went hiking. They built a campfire and looked at the stars. Despite their concerns, the cramped kitchen had plenty of space to prepare a spaghetti dinner. After warming up slowly, the small propane heater eventually warded off the fall chill.

“It was very comfortable,” Hilary said. “I was pretty surprised. I didn’t feel that closed-in feeling, even up in the loft.”

By the end of their stay, Shane wasn’t sold on the composting toilet. But overall, they said, the trip bolstered their decision to downsize. They’ve even chosen possible designs. The only obstacle now is the zoning in Pittsburgh, which can make it tough to find space for a tiny home, they said.

“If we can find a place,” Hilary said, “I don’t think there would even be a question about it.”