Speeding Up Deliveries With More Tech 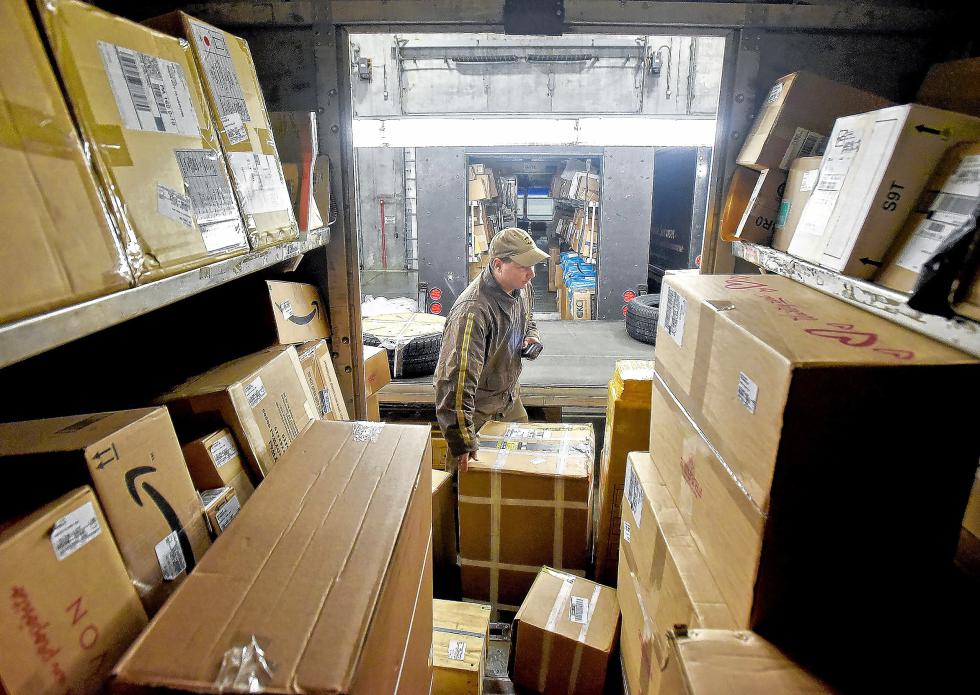 His Delivery Information Acquisition Device (DIAD) in hand, UPS driver Andrew Hancock checks the load before leaving on the day's deliveries at the UPS depot on Nov. 3, 2015 in Jackson, Pa. (Bob Donaldson/Pittsburgh Post-Gazette/TNS)

Pittsburgh — Around 8 a.m. at a cavernous warehouse outside Pittsburgh recently, about four dozen delivery drivers for United Parcel Service got their first look at the scheduled drop-offs for the day.

Prepping for roughly 9-hour shifts with anywhere from 50 to 150 stops, it could have been — and, until recently, was — a daunting start, as drivers had to calculate how best to juggle the day’s load while negotiating Pittsburgh-area traffic snarls such as bridges, tunnels and sudden road closures.

But as the drivers did their stretches and huddled for a morning pep talk, they stopped to consult a computer screen. It told them precisely what route to take to make each delivery and what time they would get there.

UPS has been expanding its use of the technology that it hopes could save 100 million miles a year from the shipping company’s treks around America’s cities and neighborhoods. Big shippers like UPS and FedEx Ground have been embracing tracking data as a way to cope with and grow with the prolonged boom in online shopping, even as they work to give customers more specific options for home delivery.

“As technology has evolved, so has what we scan,” said Kevin Koken, vice president of the FedEx Ground’s eastern region, which covers the New England and Mid-Atlantic areas. He noted that FedEx developed the first bar code used for shipping purposes in 1985.

Online sales have grown at a faster rate than those from brick-and-mortar stores, and sales this November and December are expected to follow that trend, according to the National Retail Federation. The Washington, D.C., trade group expects online sales to rise between 6 and 8 percent to as much as $105 billion, compared with retail stores growth of 3.7 percent to $630.5 billion.

The shift hasn’t always gone smoothly for delivery companies — just two years ago, stories about delayed Christmas deliveries grabbed headlines. This year, FedEx expects a record 317 million shipments between Black Friday and Christmas Eve across its global network, a 12.4 percent increase in seasonal volume. UPS is forecasting a Thanksgiving through December delivery volume of more than 630 million packages, up more than 10 percent from 2014.

The ground division of Memphis-based FedEx Corp. has increased levels of automation at some of its 31 hub facilities across the U.S. and Canada.

A key feature that management is excited about is a system that sends packages by conveyor belt through a six-sided “scanning tunnel” that tracks everything from package dimensions to weight and makes sorting decisions in about half a second.

The package then is directed using automatic sorters to its appropriate destination in the hub, where workers then load it onto a FedEx van for delivery. The goal is to minimize the number of times a human touches a package, Koken said.

“Each time you touch a package, you introduce the possibility of an error,” he said. “A computer in that same situation makes the right decision almost every time.”

FedEx Ground is now constructing a new distribution facility in suburban Pittsburgh set to open next summer. The 300,000-square-foot facility — which will be the company’s sixth facility, including its headquarters, in the Pittsburgh area — was needed to meet an explosion in demand from nearby growing area, Koken said. The facility will process about 15,000 packages an hour.

It’s clearly a strategic site choice: The new facility will sit directly across Interstate 79 from the UPS facility, which is entering its third holiday season in operation after moving there.

During a recent tour of the UPS facility along Interstate 79, Center Manager Jason Rezak said the bigger building means workers can process about 40 percent more packages than at the old place.

Each morning at around 3:30 a.m., packages are carried from tractor-trailers and put onto conveyor belts along a network of massive metal chutes that feed two main belt lines.

Under low-hanging bright lights, pre-load workers pick packages off the central belt lines and use bar codes to tell them which of about four dozen delivery trucks to load the goods into. On that particular morning, the center handled roughly 15,600 packages, said Walt DeMase, a pre-loading supervisor.

The new routing technology for delivery trucks, called Orion, will be used on 70 percent of the company’s U.S. routes this holiday season, up from 45 percent last year at this time. For each 120-stop route, the algorithm analyzes more than 200,000 options in selecting the most efficient route, the company said.

Last year, drivers with the technology showed a reduction of 6 to 8 miles per route driven, resulting in lower fuel use and related vehicle emissions, said UPS spokeswoman Susan Rosenburg. Once rolled out completely, UPS expects drivers to shave off 100 million miles. UPS doesn’t disclose the total number of miles its trucks drive a year.

DeMase, a former delivery driver, remembers when he had to use paper maps to figure out routes. After being assigned the same delivery area on most days, drivers became “creatures of habit,” he said.

“Orion shows us a better way of doing that,” DeMase said.