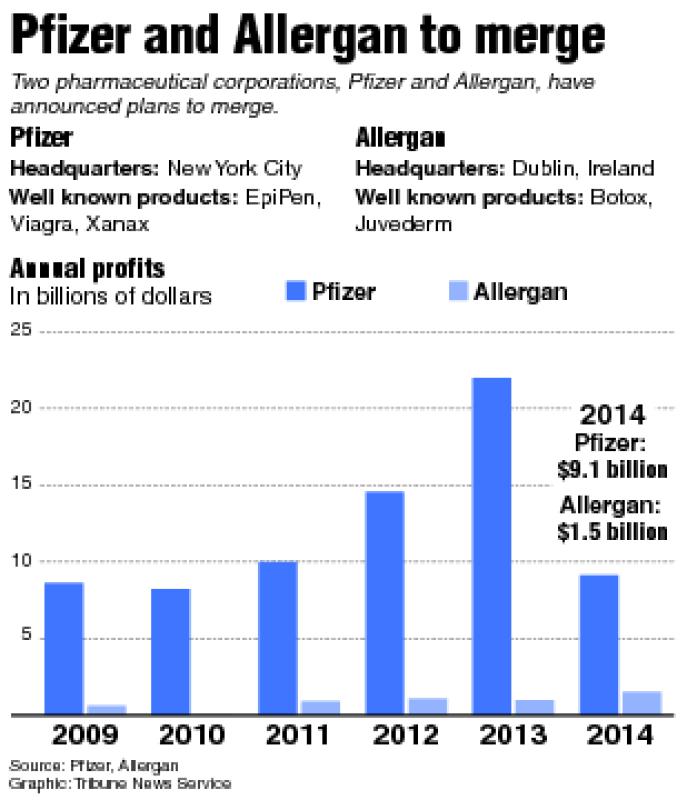 Pharmaceutical giants Pfizer Inc. and Allergan on Monday announced a $160 billion merger that would create the world’s largest drugmaker with high-profile products such as Botox, Lipitor and Viagra, while increasing pressure on Washington policymakers to address corporate tax policy because the deal would shelter the new firm’s global earnings.

Although New York-based Pfizer is the larger company, the deal is structured so that Allergan technically is the purchaser — a new twist on the controversial tax-avoidance tactic known as inversion.

The move allows the new firm — which would take Pfizer’s name and be headed by its current chief executive, Ian Read — to be headquartered for tax purposes in Dublin, Ireland, where Allergan already is located, to take advantage of the nation’s lower corporate-tax rate.

The maneuver is a variation on the conventional inversion, in which a U.S. firm buys a smaller foreign competitor in a lower-tax nation and shifts the merged company’s headquarters there.

President Obama and members of Congress from both political parties have complained about companies using the maneuver to lower how much they pay in U.S. taxes. The Treasury Department has taken steps, including several announced last week, to try to make inversions more difficult.

But those changes weren’t enough to keep Pfizer and Allergan from merging in the largest inversion-type deal so far by a U.S. company.

“The proposed combination of Pfizer and Allergan will create a leading global pharmaceutical company with the strength to research, discover and deliver more medicines and therapies to more people around the world,” Read said.

“Through this combination, Pfizer will have greater financial flexibility that will facilitate our continued discovery and development of new innovative medicines for patients, direct return of capital to shareholders, and continued investment in the United States, while also enabling our pursuit of business development opportunities on a more competitive footing within our industry,” he said.

Read said the companies believed the deal as structured would not be hindered by the Obama administration’s anti-inversion steps. And he said lowering Pfizer’s taxes wasn’t the only motivation.

“I want to stress that we’re not doing this transaction simply as a tax transaction,” Read told investors in a conference call Monday.

But some Democrats criticized the deal, which in effect turns one of America’s largest corporations into a foreign company.

Bernie Sanders, the Vermont senator seeking the Democratic presidential nomination, called on the Obama administration to block the deal.

“The Pfizer-Allergan merger would be a disaster for American consumers who already pay the highest prices in the world for prescription drugs,” Sanders said. “It also would allow another major American corporation to hide its profits overseas.”

Rep. Sander M. Levin, D-Mich., said the deal “highlights the need for Congress to take action on inversions,” which he said have cost the U.S. government tens of billions of dollars in tax revenue.

“Certain patients are going to not only see elevated prices, but potentially a loss of choice,” he said.

The deal values Allergan at $363.63 per share, about 30 percent more than its price when reports of a deal first surfaced last month.

After completion of the deal, which must be approved by U.S. and European regulators, Pfizer shareholders would own 56 percent of the combined company.

Allergan has about 2,100 employees in the Los Angeles-area city of Irvine, where it was formerly headquartered, and an additional 300 in nearby Corona out of a global workforce totaling 30,000. Pfizer, with revenue of $49.6 billion last year, employs 78,300 worldwide.

Obama and Democrats have called inversions unpatriotic and have sought changes to make them more difficult. Many Republicans also have decried inversions but said the solution is to significantly lower the U.S. corporate tax rate to reduce the incentive to reincorporate overseas.

Bipartisan efforts to overhaul the corporate tax code have stalled and legislation is unlikely until after next year’s presidential election.

“This is has been what people are more worried about. If the inversions become harder and the tax savings still make sense they’ll just do it as an out-and-out acquisition,” Harding said.

“It’s definitely an interesting inflection point and has ratcheted up the issue,” he said.

As the largest inversion-type deal so far, Pfizer and Allergan could face regulatory problems in Washington, said Maxim Jacobs, an analyst at Edison Investment Research.

“Although the Pfizer-Allergan deal appears to have been consummated and is attractive to both sides, the U.S. regulatory reaction to this very high-profile merger remains an unknown and may very well be negative due to the size of the tax inversion,” he said.

The deal has a breakup fee of as much as $3.5 billion, which both companies have the right to exercise, they said.

Corporate mergers and acquisitions this year are on pace to break the record of $4.6 trillion set in 2007, according to Dealogic, which tracks the market.

The trend is largely being driven by companies looking for acquisitions in the same industry, or close to it, so that they can gain market share, new products and geographic reach in sectors where they already compete.

Health care, in particular, has seen a spree of takeovers as providers, insurers, pharmaceutical makers and drugstores reposition themselves for industry changes spawned by the federal Affordable Care Act.

But critics have raised concerns about the increased number of takeovers. In the case of health care, some have said that as the number of players in each sector shrinks, consumers will have fewer choices and prices will rise. The Pfizer-Allergan deal drew such criticism amid the ongoing debate about higher drug prices.