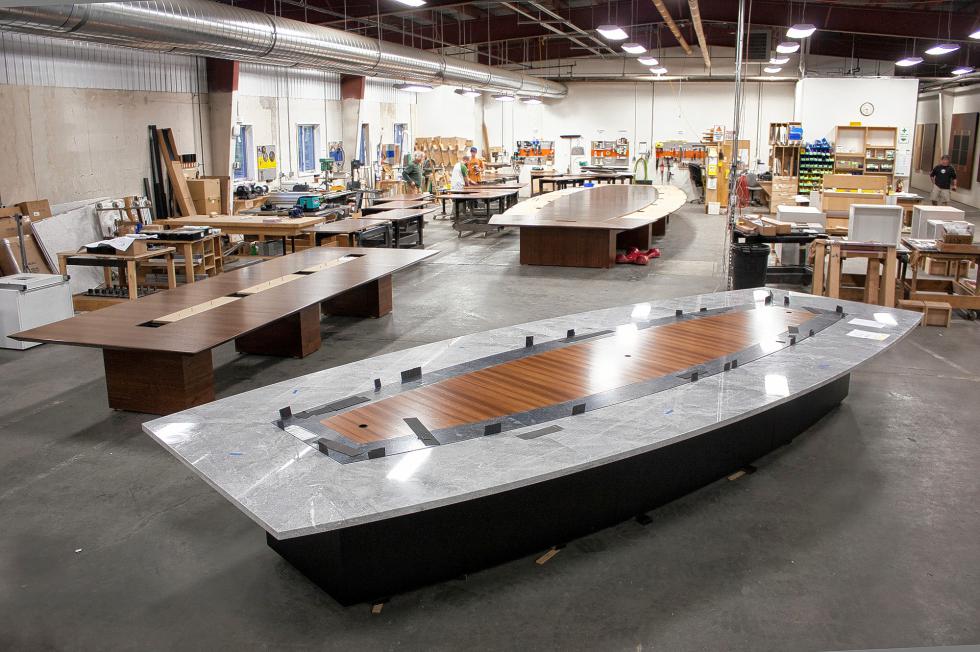 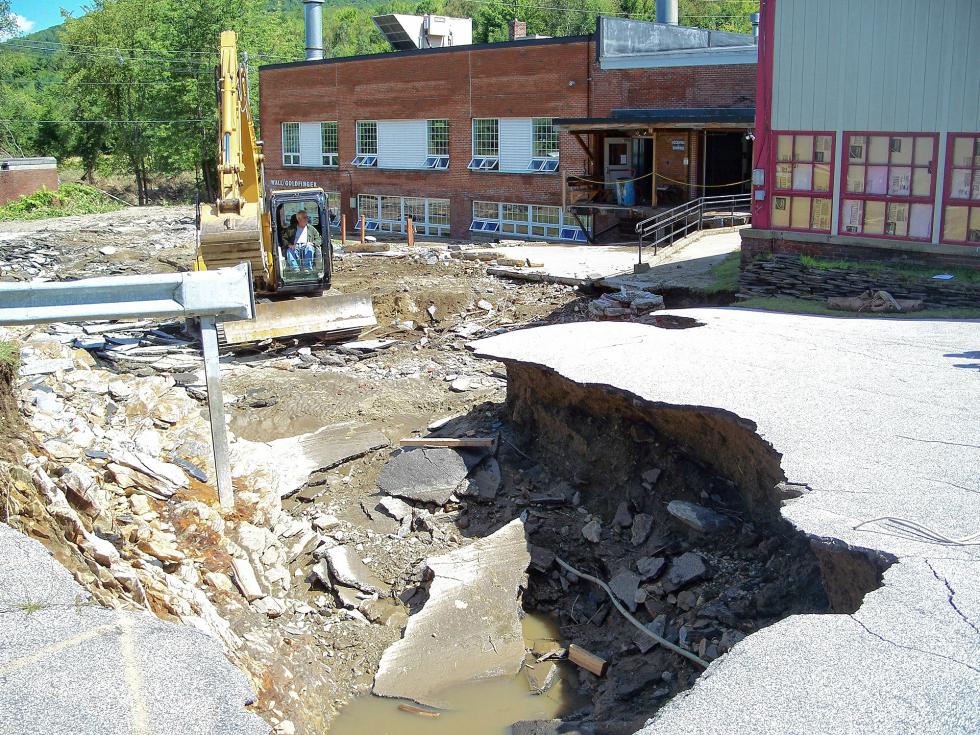 The aftermath of flooding from Tropical Storm Irene is seen in this August 2011 photograph taken at WallGoldfinger's former corporate headquarters in Northfield, Vt. (Courtesy photograph) 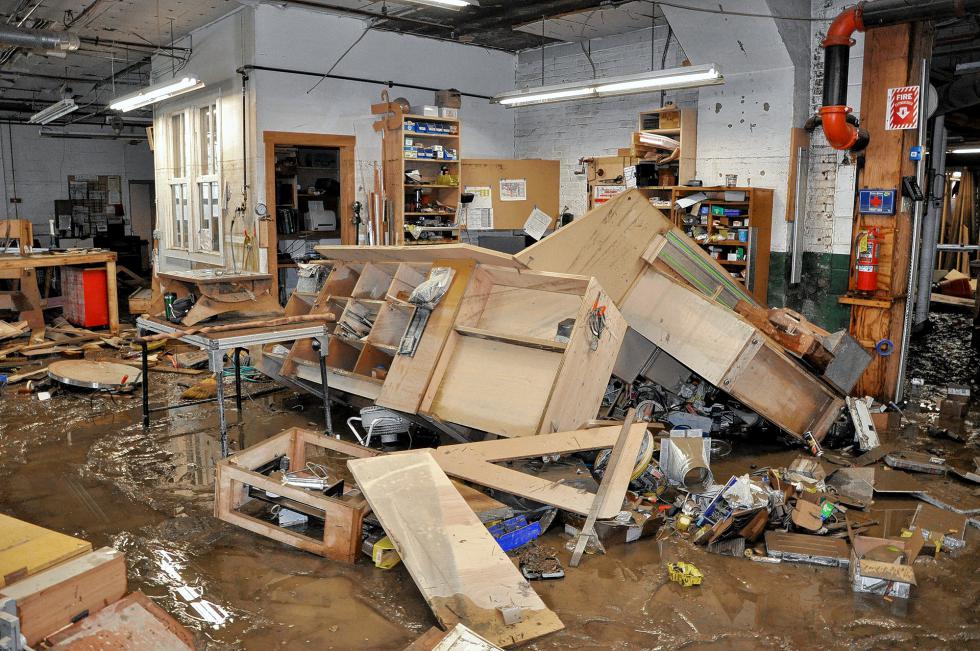 The damage to the inside of WallGoldfinger's former corporate headquarters is seen in August 2011 in Northfield, Vt. Tropical Storm Irene caused the Dog River to overflow its banks and sweep through the WallGoldfinger factory, causing hundreds of thousands of dollars in damage. (Courtesy photograph) 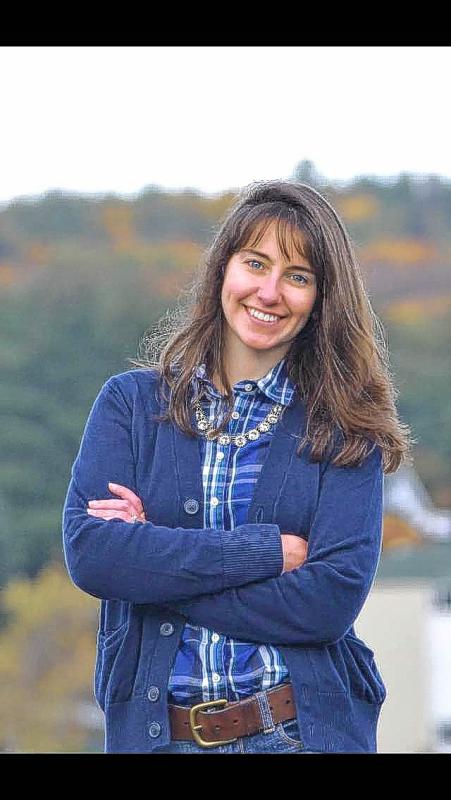 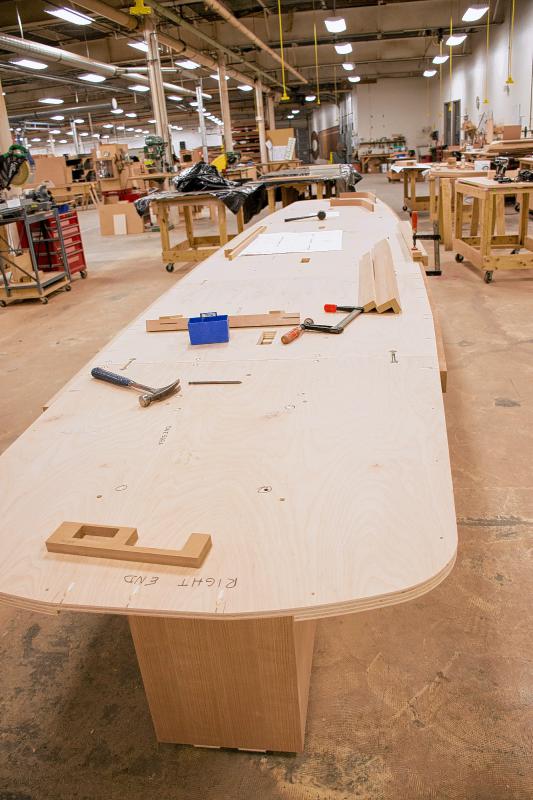 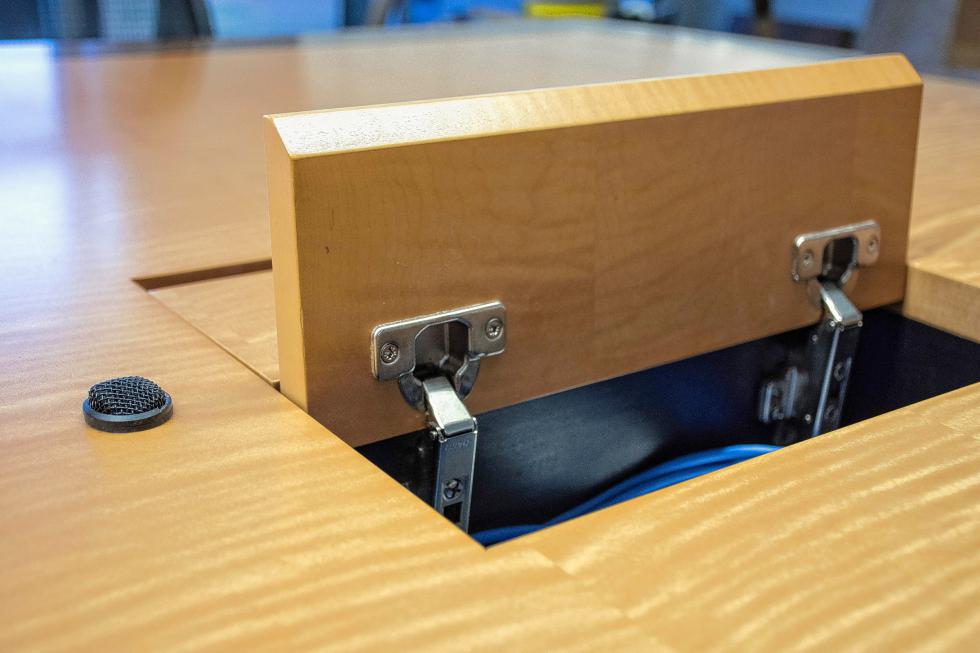 A detail shot of a power port built into a table in WallGoldfinger Inc.'s conference room is seen on November 9, 2015, at the company's headquarters in Randolph, Vt. WallGoldfinger integrates technology, such as flip-top power ports and built-in microphones, into its custom-made corporate furniture. (Nancy Nutile-McMenemy photograph) 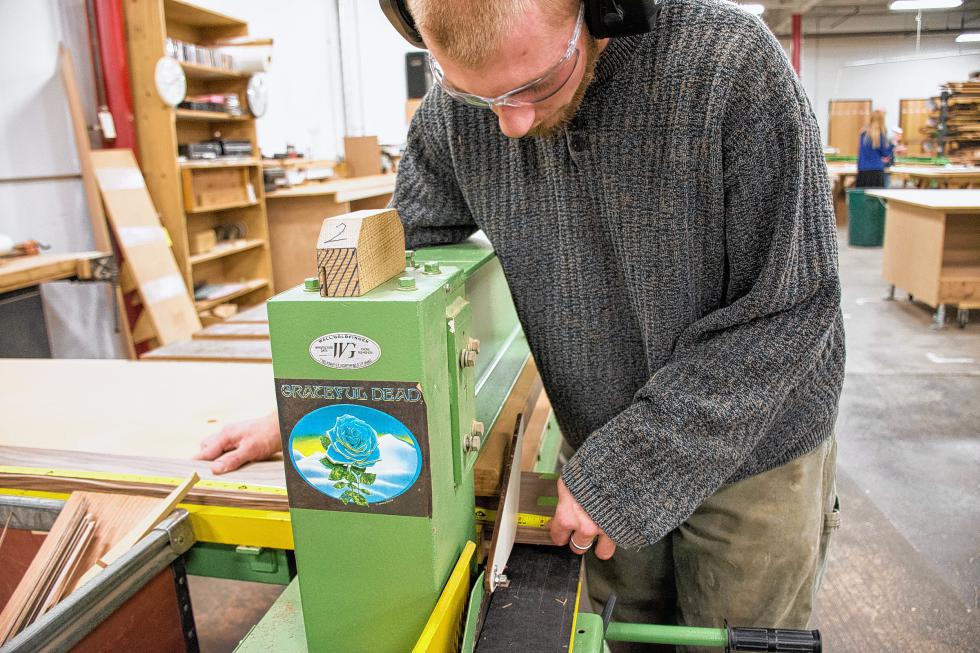 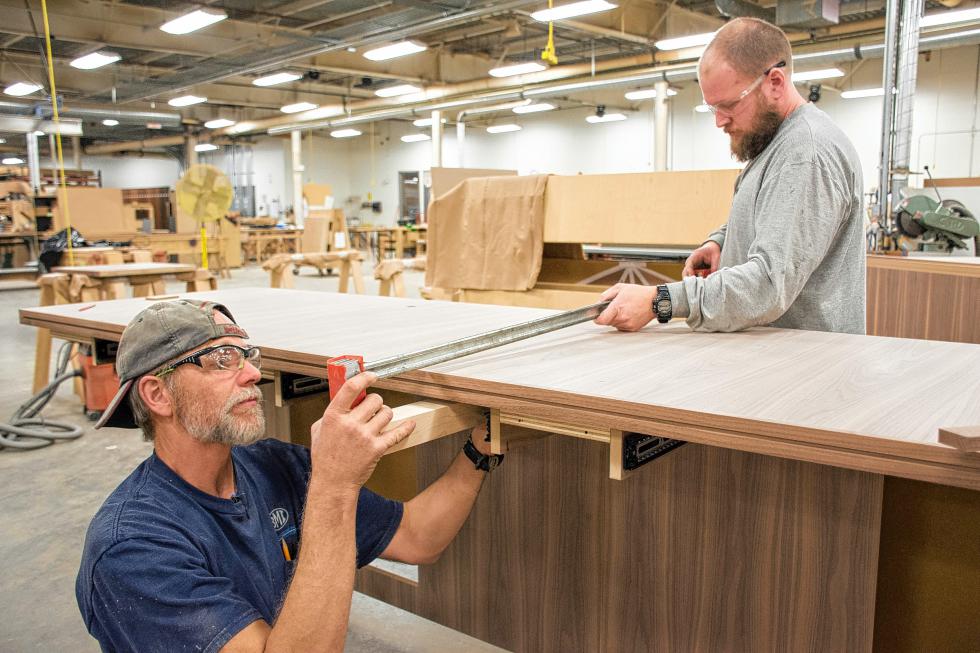 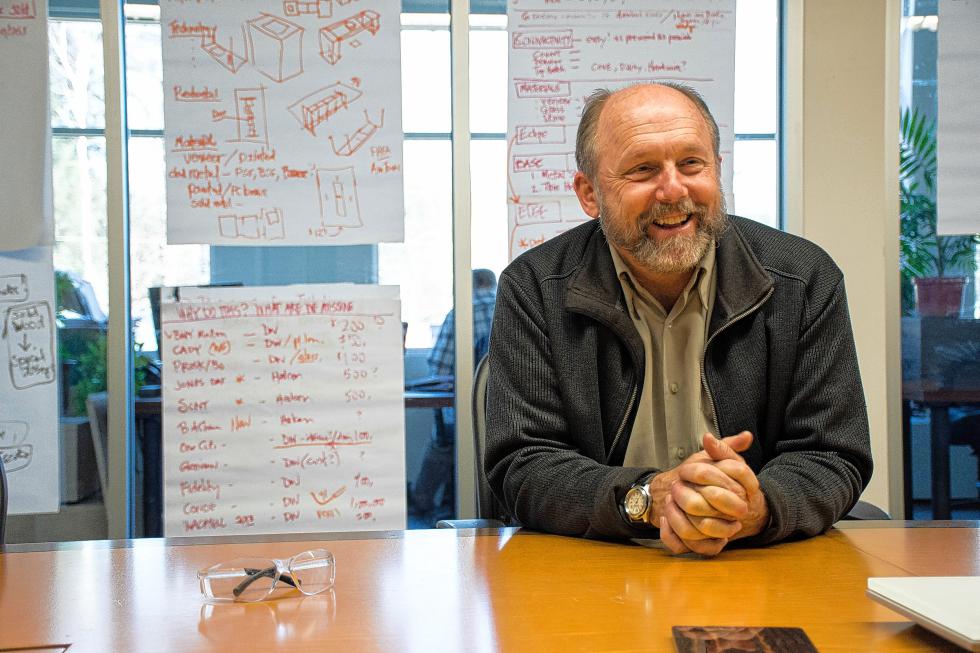 WallGoldfinger Inc. owner and CEO John Wall is seen on November 9, 2015, at the company's Randolph, Vt., headquarters. WallGoldfinger was created in 1977 after John Wall, then an employee of Union Woodworkers, bought the company with fellow employee Michael Goldfinger. Wall eventually bought out Goldfinger's share of the company to become its sole CEO. Goldfinger died of cancer in 1997. (Nancy Nutile-McMenemy photograph) 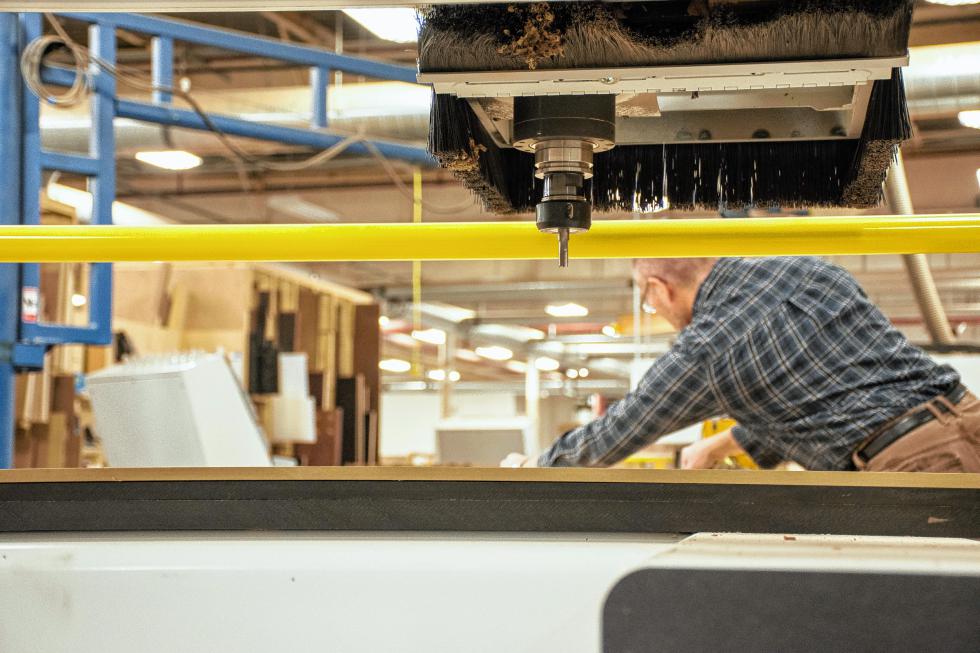 Furniture making is an art that WallGoldfinger Inc. has down to a science.

The Randolph-based company specializes in marrying corporate furniture — ranging from small desks to 50-foot conference tables — with technology to create beautiful yet functional pieces. Led by mild-mannered but driven CEO John Wall, who owns the company with his wife, Annie Gould, WallGoldfinger has grown into a formidable furniture producer catering to corporate America’s most powerful players. Founded in 1971 in Warren, Vt., as American Construction Co-op, the company has evolved from a barn-based labor of love into a state-of-the-art, environmentally friendly operation boasting cutting-edge equipment and skilled employees.

What separates WallGoldfinger from other furniture makers, aside from its focus on corporate furniture, is that just about everything it produces is custom made using a variety of materials — including exotic woods, marble, brass and stone — resulting in virtually limitless offerings. If it can be designed, WallGoldfinger almost certainly can create it.

And the company never shies away from a challenge.

“We don’t do many tables that are easy, but that’s fun for us; it keeps things fresh,” Wall said. “There are certain techniques we recycle, but most are engineered specifically for a project, so it’s always different. You’d think after 45 years in business we’d be very repetitious, but it all varies.”

One thing that has remained unchanged throughout the company’s long history, however, is its dedication to quality. Each piece is scrutinized throughout production to guarantee everything lines up correctly. The company takes pride in its products, which occupy space in the boardrooms of some of the country’s largest companies, including Bank of America, Sony Music Entertainment and General Electric.

Tough decisions are made around those tables, and the tables are built tough.

After more than four decades in business, WallGoldfinger has the production process down pat. Precision is everything, and communication is key.

Each product is built from raw materials and usually starts with a veneer, a finely sliced piece of wood. The company works with more than 50 different types of wood from all over the world, though it’s not above tracking down woods outside of its regular offerings in order to please a client. Most tables traditionally are made of solid wood or veneers, often with edges and inlays of wood, stone or metal — or a little of each.

The company will work to accommodate practically any client request into a piece, meaning the combinations and customization options are endless — everything from the materials to the lacquer to the technology can be tailored. Even the look of the wood can be varied depending on how it’s cut.

Though corporate furniture is something of a niche market, it’s not immune to design trends. Products with leather and backpainted glass are growing in popularity.

“Everybody wants dark woods — like walnuts — and white stone right now,” Wall said. “We’ve kind of switched from a woodworking operation to where we’re furniture manufacturers because we use all sorts of different materials.”

With so many options available, it’s easy to feel overwhelmed by the possibilities, but Wall said clients rarely are daunted.

“Most of our clients know exactly what they want, down to the specifics,” Wall said.

About 15 of WallGoldfinger’s 40 or so employees are involved in each table or piece the company creates. Clients usually form their own committees to oversee the products’ creation, and those committees work with WallGoldfinger to make clients’ ideas into reality.

Production takes about 16 weeks from start to finish, but “if I’m doing my job right, I know about the project way ahead of construction time,” Wall said.

The process starts with the drafting of working drawings, which essentially are blueprints created by the company’s designers and engineers that detail any veneers and structural metal the table calls for. Actual production on the piece doesn’t begin until the client has signed off on the working drawings, Wall said.

“Clients are very fussy,” Wall said. “We want to keep them happy.”

The piece then travels through the company’s 60,000-square-foot factory, passing through eight different departments and undergoing product checks every step of the way.

Prior to being shipped, the piece is dismantled and then reassembled to ensure everything fits.

The need for precision doesn’t end once the piece leaves the factory, however.

“The size of the (client’s) loading dock really matters,” said Robin Palmer, WallGoldfinger’s communications director. “You have to know everything in advance — all the dimensions, the size of the freight elevator, if the pope is in town — because it all has an impact on delivery.”

But Wall insists shipping is one of the easiest parts of the process.

“We coordinate the design with engineering with manufacturing; that’s the hard part,” Wall said. “We make tables with all this technology involved — monitors, microphones, electric connections — that also move around so you can reconfigure rooms and uses.”

Precision plays a role in clients’ satisfaction, too.

The company is not unlike a big family. Many of the company’s workers are longtime employees, but there is a nice mix of recent hires as well, and Wall is looking for more.

“It grows very slowly, but we’re just a little short of 40 employees right now, and we have about five open positions. We’re in very good shape,” Wall said.

There’s a reason employees tend to stick around: They like their work environment.

“I love the energy of John and his wife, Annie Gould. They’re so positive and kind,” said Palmer, who joined the company about a year ago. “They make it a great place to work.”

Jim Miller, an estimator who has worked at WallGoldfinger for about 27 years, said the company’s growth has made for an enjoyable ride.

“We spent a long time devoted toward getting to the point we’re at now,” Miller said. “Things are not as intimidating now as they were the first time we did them. It’s been exciting to ride along with the company — our products are simple, cleaner, less ornate.

“It’s less popular to show off an opulent boardroom and more important to have technology and a good product.”

Good product is WallGoldfinger’s MO, which is why it’s the go-to corporate furniture provider for clients as diverse as Microsoft Corp., Procter & Gamble Co., Dartmouth College and several other Ivy League schools, Goldman Sachs and even the White House.

The company’s work also has earned it a loyal customer base. About 80 percent of this year’s clients have been returning customers, Wall said, and the company strives to maintain relationships with its clients while cultivating new ones.

WallGoldfinger’s dedication to customer satisfaction was tested in August 2011, when Tropical Storm Irene stopped the company dead in its tracks.

The storm hit on a Sunday, dropping inches of rain on the company’s two-story location in Northfield, Vt., causing the nearby Dog River to overflow its banks and sweep through the WallGoldfinger factory. It all happened within a span of hours.

“Every square foot was hit,” Wall said of the damage to the factory.

Tables built for the Polish Embassy floated around inside. At the time, the company was doing work for both President Obama and Bain Capital, the Boston-based private investment firm started by former Massachusetts Gov. Mitt Romney. “We were politically balanced,” Wall joked.

The water came within several inches of the Bain Capital table, but it escaped unscathed. So did the table bound for the White House, which shipped out two days later.

Other pieces weren’t so lucky. “A lot of furniture was wrecked, but there also were a lot of near misses,” Wall said. Still, the company suffered about $300,000 in furniture remakes.

In the aftermath of the flood, WallGoldfinger hired a number of subcontractors to help it stay on schedule, but the pieces did not meet WallGoldfinger’s standards.

“We said we’d do what we could to keep our clients happy and fix it later,” Wall said.

True to its word, the company remade every piece of furniture built by a subcontractor, at no charge to clients, once the company was able to get its operation back up and running.

Recovery was not easy. Though the company was able to clean up the damaged factory and even rebuild part of it, it was clear WallGoldfinger needed to find a new place to call home.

So began a search that resulted in the company’s current location in a building that formerly was home to Ethan Allen Interiors Inc.’s Randolph division, which closed in June 2002.

“We were really fortunate,” Wall said. “It was the only building 30 minutes from where we were that still was (within an acceptable distance). I complain about the commute now, but only because I used to be able to walk to work.”

In a way, the damage was serendipitous: The move allowed the company to get a fresh start while still putting down roots and remaining true to its mission. State-of-the-art tools were purchased, new employees were hired, and the company expanded its offerings.

“We’ve recovered from the flood,” Wall said, “and we’re ready for the future.”