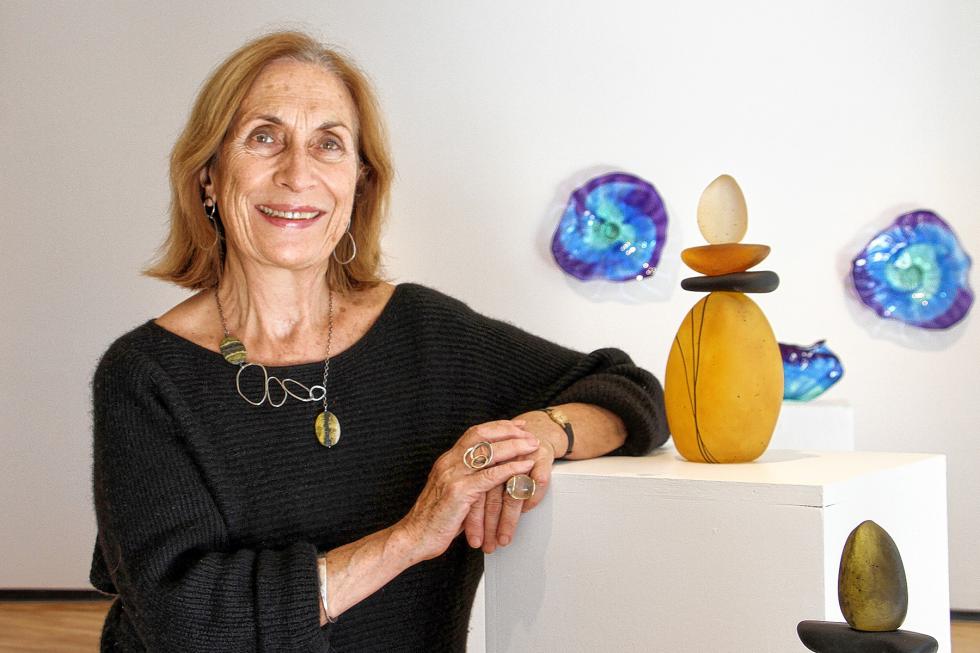 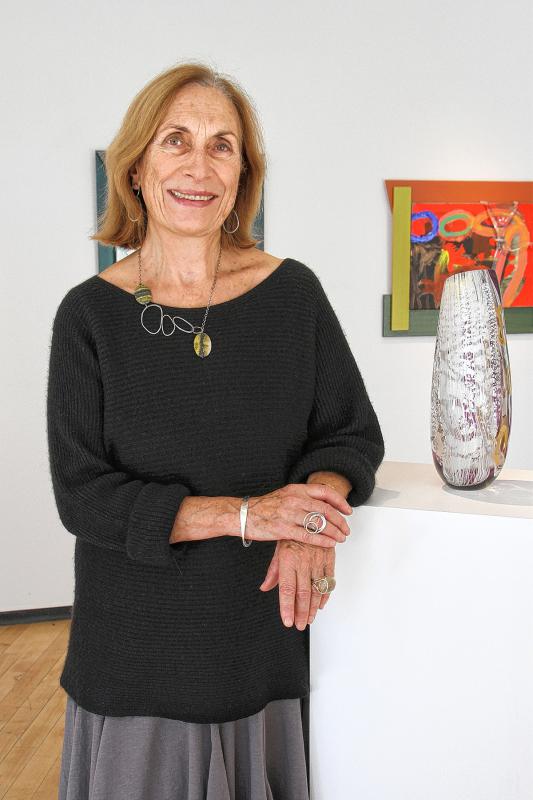 Over a lunch of cheddar soup and a kale salad, the longtime leader of the AVA Gallery and Art Center talks about falling in love in Oslo, raising a family in Italy, building a thriving arts operation in the Upper Valley, and having the last laugh on the stern man who told her, “We don’t need an art gallery in Lebanon.”

On the day before Halloween, Bente Torjusen, the tall, vivacious, and tastefully dressed executive director of AVA Gallery and Art Center, glides into Simon Pearce Restaurant for our Enterprise lunch appointment. Taking advantage of the impending approach of ghosts and goblins, I ask the leader of one of the Upper Valley’s most prominent art institutions if she believes in spirits.

“No!” she tells me emphatically. “But,” she adds, “in old houses there is a spirit of the past. In the AVA building, which is very old, there is a something — a feeling that you get that we have strived to preserve as we renovated it for the present.”

It is a skilled response to my opening gambit, and it moves our conversation back to AVA.

Torjusen has been executive director of AVA since 1986, when the then-diminutive Alliance for the Visual Arts was located in Hanover on the second floor of the Dartmouth Bookstore. She has overseen AVA’s transformation from that cramped gallery to the large art and education institution that it is today.

We settle into our chairs and I suggest she try the sparkling nonalcoholic apple cider and she accepts. The cider appears in tall, elegant glasses and we toast autumn and AVA. Lunch orders are placed — we both decide on the Vermont cheddar soup and kale salad with apples and crushed sunflower seeds.

“An autumn feast,” my guest exclaims.

Torjusen was born and grew up in Oslo, Norway, a city with a tradition of bringing art out of the museums and making it more accessible to the public. It was a skill she learned while working in Oslo’s Edvard Munch Museum, and it was this Norwegian experience that Torjusen later would use to help transform AVA into a vital part of life in the Upper Valley.

It was while she worked at the Munch museum that Torjusen met her husband, an American who was in Oslo to make a documentary on Munch. They fell in love, married and had a daughter. Soon, another assignment moved the couple to Italy, where they had another daughter. “We all lived in this wonderful house on a hill, surrounded by olive trees, in a small town called Terranuova Bracciolini, between Florence and Arezzo.” Torjusen and her children spoke Italian.

“It was paradise,” she said.

Torjusen never wanted to leave, but her husband wanted their daughters to begin school in the United States. One day, American friends who lived in Pomfret came to lunch and told them about this wonderful place where they could live in one community and go to school in another.

“They were speaking about Norwich and Hanover,” Torjusen said. “Long story short, we moved there.”

Our food arrives, the beaming server waiting until we’ve tasted the soup. We dip into the kale salad. Torjusen beams back, pronounces it to be the ideal autumn lunch, and continues talking about her odyssey.

“I was pretty lost when we came here, from Florence, Italy, I have to say, but what made it work out for me really was art and the artists I met through the AVA Gallery.” In turn, the art community adopted her. A few years later, when a vacancy opened up for AVA’s director, someone suggested Torjusen apply. She did, and she got the job.

A year or two later, the bookstore wanted to expand and the gallery had to move.

“I knew we couldn’t afford Hanover, and someone told us about this 140-year-old factory in Lebanon. We went there and saw the rickety building. But I looked underneath the linoleum and saw hardwood floors, and noted the high ceilings. It had a really good feeling about it,” she said.

Torjusen was looking for space to expand AVA’s education programs. Offered a deal, AVA took it. It was 1990 and Torjusen now had a gallery and a separate teaching space. She began to execute her vision, honed in Oslo, of integrating art with the community.

Lebanon and the Upper Valley’s art scene would never be the same.

Artists began to rent studios in the building. There were children’s and adult workshops. The community was getting involved. In 2003, 13 years after moving, AVA decided to buy the building. A capital campaign resulted in a highly successful renovation. Slowly but surely, what Torjusen had imagined was becoming reality.

Today, it takes a 26-page newsletter to list the exhibitions, classes, demonstrations and other events that AVA will offer this fall and winter. And more is to come. A new capital campaign will add a three-dimensional studies center for instruction in woodworking, stone carving, welding, casting and ceramics, and will fund a new gallery for member artists to build on AVA’s roots as an alliance of artists.

“We have been blessed with incredibly generous and far-thinking donors,” Torjusen said. “That’s what’s made all of this possible.”

As proud as she is of AVA’s growth, Torjusen is quick to note that AVA has been successfully working toward becoming a net zero energy organization. “The renovation resulted in substantial energy reduction and cost savings. As a result, we didn’t increase the rent on the 20 individual artists’ studios for several years. And we expect the new building to meet LEED Gold certification standards from day one,” she said.

Torjusen’s attention to the financial underpinnings of AVA’s expansion are as impressive as her vision of connecting art to the community.

“In one year, thanks to gifts to the current capital campaign, we will retire the mortgage on our original building, then all the studio rental income will go toward programming and development,” she said.

Torjusen still remembers the time, shortly after AVA had moved to Lebanon, when “a man came in to the newly rented building, looked at me sternly, and said, ‘We don’t need an art gallery in Lebanon.’ Well, guess what? Last December we received the Business of the Year Award from the Lebanon Chamber of Commerce,” Torjusen said proudly. The honor was in recognition of how AVA helps bring a variety of visitors to the city. “They attend classes and exhibitions, go to restaurants, enliven the whole city,” she said. “I wonder what that man would say if I met him today.”

Talk now is circulating that this intrepid executive director will be retiring shortly. I ask Torjusen if there is any truth to it. “I’d like to do that when AVA is close to reaching its $3.5 million capital campaign. Then someone else can take it over the top and run with it,” she said.

As we get up to leave, I ask her what she will do next. “My late husband was hugely accomplished, but most of his work — documentaries, drawings, paintings, photographs — is in storage. I’d like to organize it and perhaps write a biography.”

And move to sunnier climes, perhaps by a beach?

A peal of laughter later, my luncheon companion reminds me that she still is a Scandinavian.

“Without winter and snow, whatever will I do?”