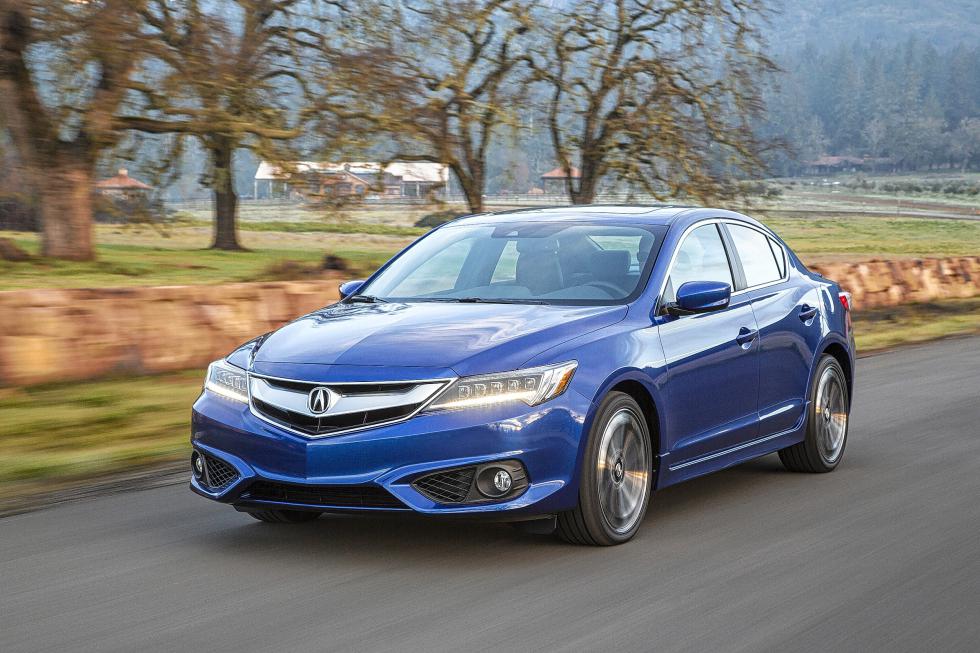 Acura dropped the underpowered base 2.0-liter, and the old 2.4-liter of recent years, in favor of an upgraded 2.4-liter, inline 4-cylinder engine that gets 201 horses and 180 pound-feet of torque. (Acura/TNS)

At first glance, it’s the look — the aggressive grille, wheels and sharp, Jewel-Eye LED headlights — that suggests Acura is stepping up its game with the 2016 ILX.

But the real proof is in its performance — that surge from a dead stop, the quick and smooth upshifts from Acura’s new dual-clutch automatic transmission, the tacky grip on corners. Add to that some new safety features, and you have a compelling argument that the ILX is becoming one to watch in the luxury sport sedan market.

Yeah, BMW and Audi, that’s the ILX gaining ground in your rearview mirrors. The ILX may not be with the big boys in all categories but it is now a more worthy opponent. And hey, it costs a few bucks less than those big shots.

Acura dropped the underpowered base 2.0-liter and the old 2.4-liter of recent years in favor of an upgraded 2.4-liter, inline four-cylinder engine that gets 201 horses and 180 pound-feet of torque. Borrowed from the TLX, it’s the sole powerplant available.

Much credit for the car’s improved driving performance goes to the eight-speed, dual-clutch automatic transmission. For the record, this is actually a sequential manual tranny. It uses a torque converter to produce smoother, quicker shifts — and it happens either on its own or when the driver taps the paddle shifters.

While no one driving this car is bragging about neck-jarring speed, the front-wheel-drive ILX has good pep and gets up to 60 mph in 6.8 seconds.

Electric power-assisted steering has been retuned and is on the lighter side but still doesn’t offer great feedback. Still, the ILX is fun to drive and stays flat and true through corners.

Ride quality is improved with updated shocks and springs smoothing out the road’s imperfections. On the highway, ILX goes comfortably and confidently, with little wind or road noise to compete with conversation. Acura put a lot of effort into quieting the ride with thicker door glass and quiet-induced wheels.

And, when you drive the car under ideal conditions on the open road, the Environmental Protection Agency estimates you’ll see wallet-comforting gas mileage of 36 mpg. Meanwhile, you’ll get 25 mpg around town.

While the interior feels a bit more refined, there is not much new here. Touch surfaces are still rather mainstream and don’t look or feel as upscale as you might expect.

Seating is comfortable and supportive, and with the A-SPEC styling package, you get suede inserts with contrast stitching. Headroom and legroom are sufficient up front, and legroom is surprisingly decent in the backseat too. Taller folks might wish they had a bit more headroom, though.

A dual touchscreen setup separates the audio and navigation functions, while climate is controlled with its own manual knobs. The infotainment system remains pesky — it is not the most intuitive system around — but it can be figured out.

Trunk space is decent at 12.3 cubic feet, but you may have to get creative when it comes to stashing bulky or oddly shaped stuff; the trunk opening is a bit narrow. The ILX does have a fold-down rear seatback, however.

For safety, Acura offers the usual package of air bags standard — front, side and side-curtain — and also offers a rearview camera with cross-traffic alert as standard.

This safety package is one of six equipment levels offered with the ILX. Even the base, though, gets a sunroof, auto headlights, eight-way power driver seat, and dual-zone climate control.

The Premium package adds a dual-screen infotainment setup which boasts an upper screen of 8 inches instead of 5 plus a seven-speaker audio system with satellite radio. It also gets leather seats and driver memory settings, and blind-spot monitor.

Then there’s the Technology plan, which combines the AcuraWatch and Premium packages and includes navigation and 10-speaker ELS audio system.

The A-SPEC package can be attached to the Premium or Technology setup, giving the ILX 18-inch wheels, a rear-deck spoiler, fog lights and snazzier seats.

With the 2016 ILX, Acura is making strides against class-leaders BMW 3-Series, Mercedes CLA and Audi A3. It still falls short in some areas, but the good news is that one of those areas is price. So, for value’s sake alone, it’s a good idea to add it to your shopping list.

As tested (A-SPEC, loaded with Premium, Technology and AcuraWatch packages): $34,890