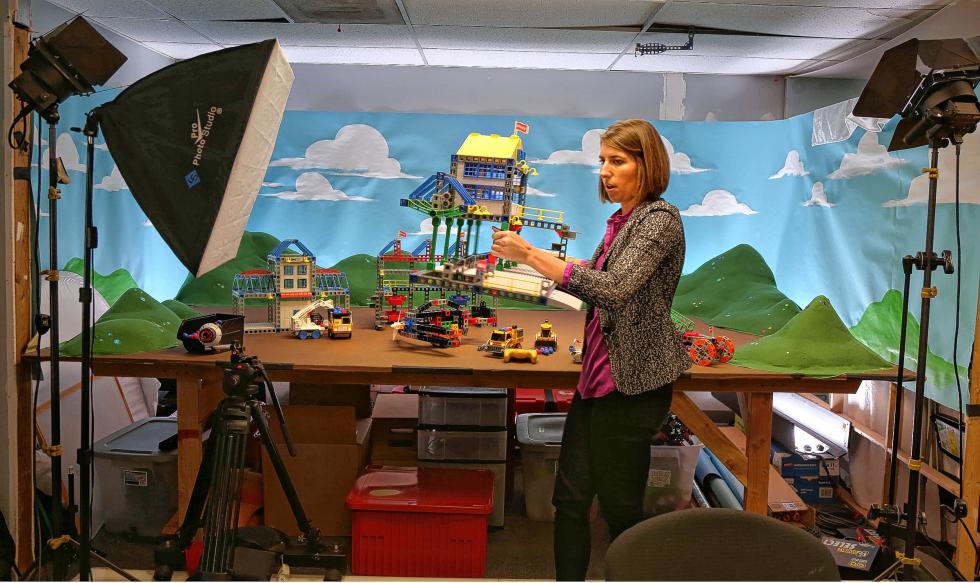 San Diego — Children used to gravitate toward the Rokenbok display at mom-and-pop stores to get their hands on the toymaker’s monorail sets, robots and battery-powered dump trucks.

But as big retailers like Wal-Mart and Target drove many of those specialty stores out of business several years ago, the San Diego area toy brand struggled to give shoppers a close look at their pricey play sets, which can cost hundreds of dollars.

That’s when they turned to YouTube. The privately owned business started shooting two- to three-minute stop-animation videos of their toys in action.

The clips show Rokenbok’s small Lego-like figures launching a rocket ship, fending off a robot invasion and being eaten by a Tyrannosaurus rex. Views have climbed into the millions and sales quickly grew 25 percent.

“We’re not a mass-market toy,” said Caitlin Bigelow, Rokenbok’s director of marketing who also directs and scripts the company’s YouTube videos. “The great thing about YouTube is we could target our niche audience. We discovered this whole subculture of kids who liked watching things like trash truck videos.”

Not every toymaker can be like Walt Disney Co., a behemoth that pipes original content onto its own cable network while releasing blockbuster movies to hordes of adoring fans.

For others, there’s YouTube. The Google-owned video platform has become an increasingly powerful tool for toy brands seeking to reach kids in an age when Saturday morning cartoons are a relic of a bygone age and mobile devices are quickly replacing televisions as the primary source of entertainment.

“YouTube especially benefits small and mid-size companies that may not have the money to create full animated series,” said Jim Silver, editor in chief of toy review website TTPM. “It’s cost effective and it gets seen by kids.”

That’s not to say some bigger names haven’t benefited too.

Today, toy giants Lego, Mattel and Hasbro all run YouTube channels with varying degrees of original digital content. The popular series Barbie: Life in the Dreamhouse leaned heavily on YouTube, as did an animated series for the dolls in Monster High — both Mattel properties. Even Toys R Us is getting into the action with YouTube videos introducing the hottest toys.

“Toymakers want to go where the eyeballs are and a generation ago that was Saturday morning cartoons,” said Jason Moser, a toy analyst at the Motley Fool. “Today though, that dynamic has shifted with not only the move away from linear television but also the very redefining of what a TV is with the proliferation of mobile devices.”

At least three-quarters of all U.S. children ages 8 and younger have access to a smartphone or tablet, according to Common Sense, a nonprofit organization that helps families promote safe technology and media for children.

With the big budgets required, a TV show is often out of the question for smaller brands. And even if they did come up with the dough, they would find it challenging to break into a space dominated by the three major children’s networks, Moser said.

“Cracking the triopoly is a more difficult puzzle to solve as they are responsible for many of the most popular brands on the market today and so much of that stems from the very content they create,” Moser said. “Disney in particular has really set the standard for creating wonderful content and then monetizing that content in a number of different ways including toys, games and other consumer goods. Like the saying goes, content is king.”

One company that started with a YouTube-only strategy is currently giving Disney a run for its money on the toy shelves, though.

Moose Toys, an Australian brand, has exploded onto the scene with collectible figurines called Shopkins. In just over a year, the dolls, which depict everyday consumer items like vegetables, cupcakes and shoes, have become one of the top-selling toys in the U.S. Rare pieces are commanding thousands of dollars on EBay.

There is no Shopkins TV show like there is for other popular toys such as Disney’s “Doc McStuffins” or Hasbro’s “My Little Pony.” But the company released 20 so-called webisodes — Shopkins cartoons clocking in at under two minutes — during the toy’s launch in summer 2014. The videos have collectively garnered 30 million views and counting.

“We didn’t launch with any TV series or any mainstream entertainment because we knew consumers were on YouTube as much as traditional TV,” said Paul Solomon, co-chief executive of Moose Toys. “Kids are looking for instant engagement from the brands they love.”

Complemented by fans’ “unboxing” videos on YouTube, “Shopkins” toys and accompanying webisodes turned into a smash success. The company had to more than double the number of its factories in China to meet demand. One of its ultra-rare characters called “Cupcake Queen” sold for $4,300 on EBay.

Now established, Solomon said the company is looking to break into regular TV with a “Shopkins” series by next fall, though no broadcaster has been named yet.

“There’s certainly room for everybody here,” Solomon said. “TV is still extremely powerful even though YouTube is fast becoming the preferred screen.”

Meanwhile, at Rokenbok’s headquarters, about 20 miles north of downtown San Diego, staff continue to churn out up to 40 YouTube videos a year. The painstaking process of stop animation means it takes three to four weeks to produce a typical two-minute clip.

Filming takes place in a toy lab. Paul Eichen, Rokenbok’s chief executive who founded the company in 1995, often helps build sets for the shoots. Sales have dwindled the last year since YouTube stopped allowing brands to customize their YouTube pages for desktop computers with advertising and links.

Still, the brand’s channel has garnered more than 61 million views -— not bad for an educational toy company with only a handful of full-time employees.