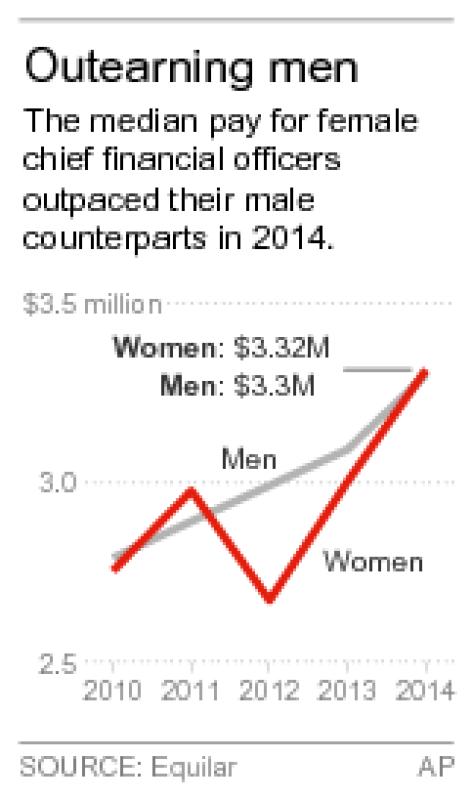 Women may be badly outnumbered in the top ranks of corporate America, but at least they aren’t underpaid.

Compensation for female chief financial officers at S&P 500 companies last year outpaced that of their male counterparts, according to an analysis by executive compensation firm Equilar and the Associated Press. It follows a similar trend seen with female CEOs in recent years.

The gains, for both men and women, are in part a result of the expansion of the CFO role to include far more responsibility and visibility.

Companies and shareholders became more focused on financial security and regulation after the financial crisis, and corporate finance began to play a bigger role in company strategy, according to Gregg Passin, a compensation expert at consulting firm Mercer.

Ruth Porat, became one of the most powerful women on Wall Street while helping steer Morgan Stanley, one of the nation’s biggest investment banks, through the aftermath of the financial crisis. She topped the list of highest paid female CFOs with her $14.4 million pay package from Morgan Stanley for the 2014 fiscal year.

Google has since lured her away and will pay her more than $70 million for her first year as CFO there. Investors have warmly welcomed her arrival at Google, where she is expected to bring some financial discipline to what some consider their free-spending ways.

The increased responsibility and visibility has helped some women CFOs rise even further, to CEO. Indra Nooyi, CEO of PepsiCo and Lynn Good, CEO of Duke Energy are both former CFOs.

“It’s a unique position that has the ability to contribute to day-to-day operations but also on long-term strategic planning,” Good said. She called the CFO position “a critical training ground” for aspiring CEOs.

The other top-paid female CFOs, after Porat, include Marianne Lake of JPMorgan Chase, whose compensation package is valued at $9.1 million, Catherine Lesjak of Hewlett-Packard at $8 million, Sharon McCollam at Best Buy at $7 million and Robin Washington of Gilead Sciences at $6.2 million. This ranking reflects only the companies where the CFOs who have served two consecutive years in their particular position.

To calculate pay, Equilar adds salary, bonus, perks, stock awards, stock option awards and other pay components. To determine what stock and option awards are worth, Equilar uses the value of an award on the day it is granted, as shown in a company’s proxy statement.

The high median pay for female CFOs is partly a result of sample size — there were only 60 female CFOs at the S&P 500 companies that qualified for inclusion in the study during the last fiscal year, compared with 437 men, according to Equilar.

It is also a factor in female CEO pay. Median CEO pay for women was $15.9 million last year, according to an analysis done earlier this year by Equilar and the AP, compared with $10.4 million for male CEOs. There were just 17 female CEOs, however.

The small group of women in these important roles tended to be focused at the largest companies, where pay is higher. Crist said that he expects more women to take on CFO duties in years ahead but the pay range will broaden as more women join smaller companies.

“It’s a heck of a trend,” he said. “It has been predominantly white male centric forever.”