In Search of Hide, Hair

By Photographs by Sarah Priestap Story by Liz Sauchelli - Dec 26, 2015 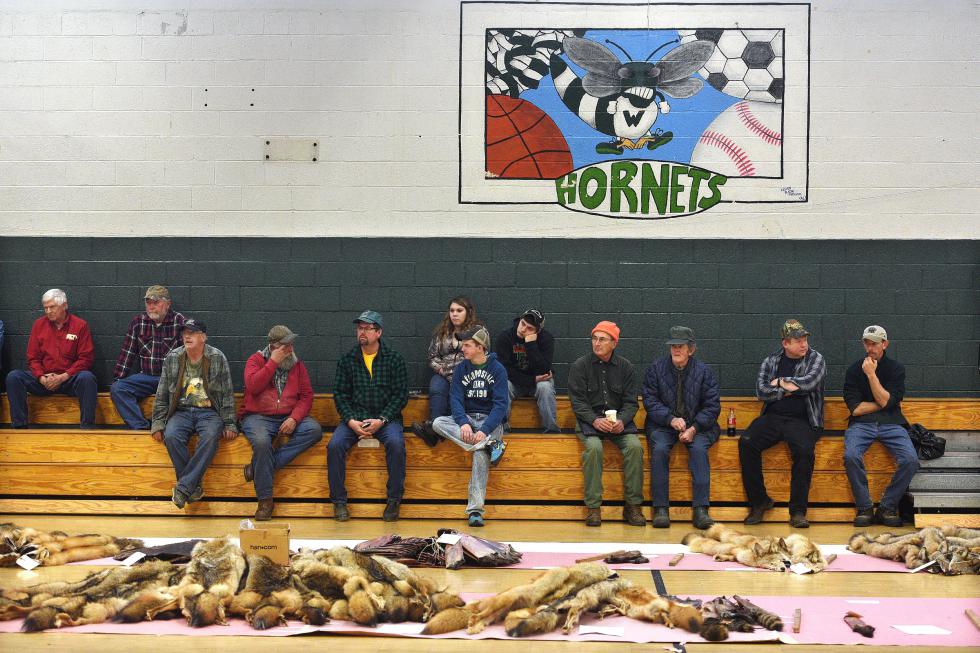 With coyote, fox, mink, muskrat, beaver, bobcat, and fisher cat pelts lining the floor of the Whitcomb High School gym, trappers and spectators watch the beginning of the semi-annual Vermont Trapping Association fur auction in Bethel, Vt., on December 12, 2015. Due to a poor fur market, the quantity and price of furs were lower than average. (Valley News - Sarah Priestap) <p><i>Copyright © Valley News. May not be reprinted or used online without permission. Send requests to permission@vnews.com.</i></p> 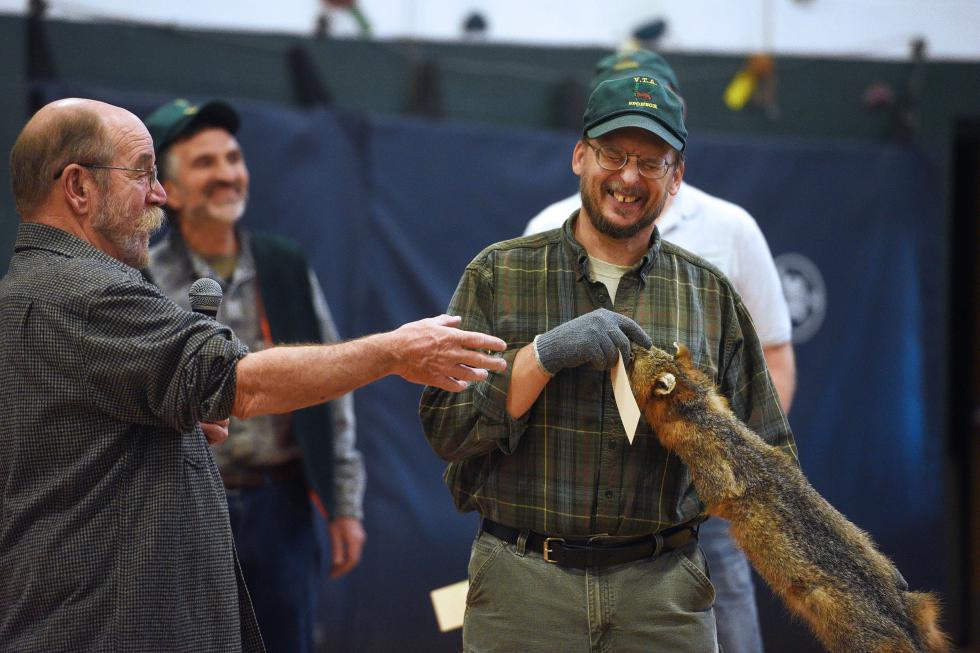 Auctioneer Chuck Eaton, of West Fairlee, Vt., jokes with David Perrin, of Braintree, Vt., while auctioning a fox pelt during the semi-annual fur auction at Whitcomb High School in Bethel, Vt., on December 12, 2015. Eaton kept buyers and sellers laughing with many jokes, especially helpful due to a low price year for furs. (Valley News - Sarah Priestap) <p><i>Copyright © Valley News. May not be reprinted or used online without permission. Send requests to permission@vnews.com.</i></p> 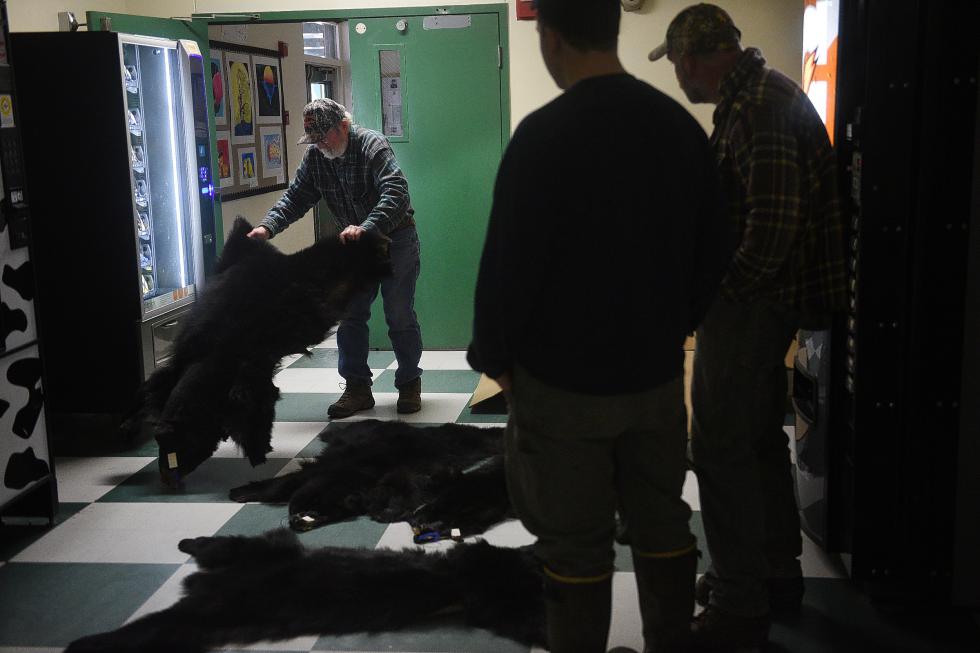 Brent Teillon, of Morrisville, Vt., takes a look at tanned bear pelts brought in by trappers to potentially sell to the Vermont Trappers Association while the semi-annual fur sale was going on at Whitcomb High School in Bethel, Vt., on December 12, 2015. Teillon said that Vermont Trappers Association will sell items, such as tanned pelts, tails, and feet at trade shows throughout the year to garner money for the group. (Valley News - Sarah Priestap) <p><i>Copyright © Valley News. May not be reprinted or used online without permission. Send requests to permission@vnews.com.</i></p> 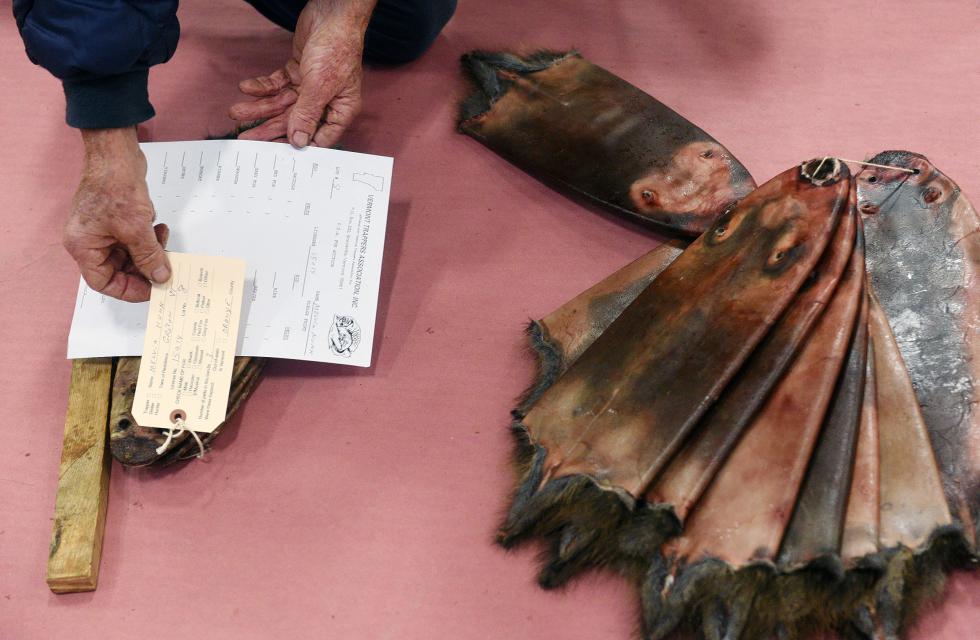 Melvin Nunn, of Groton, Vt., affixes an identification tag to his lot of muskrat before the fur auction at Whitcomb High School in Bethel, Vt., on December 12, 2015. Each pelt is recorded, along with the hunter's name and hunting license number. (Valley News - Sarah Priestap) <p><i>Copyright © Valley News. May not be reprinted or used online without permission. Send requests to permission@vnews.com.</i></p> 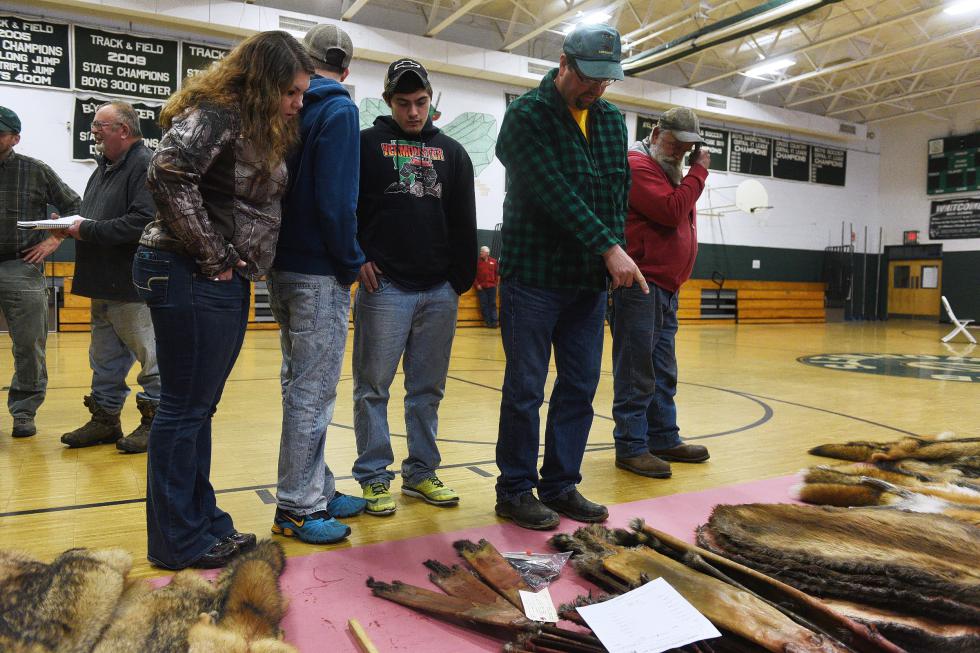 Pete Stever, of Fairlee, Vt., points to a stack of beaver pelts as Danielle, left, and Shane Smith, of Orford, N.H., and Austin Cassidy of Bradford, Vt., at Whitcomb High School in Bethel, Vt., on December 12, 2015. Stever traps on his farm to keep coyotes away from his cattle, though he said he was waiting to bring pelts to the spring fur auction, held in March. (Valley News - Sarah Priestap) <p><i>Copyright © Valley News. May not be reprinted or used online without permission. Send requests to permission@vnews.com.</i></p>

Bethel — It’s an occupation that’s been around longer than Vermont has been a state and the United States has been a country.

At Whitcomb High School earlier this month, fur buyers and trappers stood in the gym among raccoon, muskrat, coyote, fox and beaver pelts discussing the trade, the season (a popular topic: the effect of warm weather), and catching up with old friends.

Rows of fur pelts were lined up on paper to protect the wooden floor. Many attendees sported hunting camouflage and boots with heavy soles that clearly had traveled the region’s forests and fields.

Stever, who owns a farm with 400 head of cattle on Lake Fairlee, has trapped for more than 30 years. This year, he lost calves to coyotes and was able to remedy the situation himself.

Trapping has a lot to do with population control, said Stever, one of the directors of the Vermont Trappers Association. As the number of trappers decreases, the population of certain animals climbs.

“I definitely think there’s more coyotes than ever,” he said.

Prior to the start of the auction, Mary Beth Adler, a wildlife habitat technician with the Vermont Fish and Wildlife Department, was examining muskrat pelts to determine the age and sex of each animal.

The trappers association holds two auctions every year: one in March and one in December. Representatives from the department attend each one.

“We use (the auctions) to track trends in populations, to keep track of the success rate of the muskrat,” Adler said. “They can be a little bit vulnerable to pollutants so we like to keep an eye on them.”

Trappers pay attention to population trends and the way the weather affects certain creatures. They understand the habitat, the habits of animals and conservation efforts.

“What I find most impressive about these guys, this is just a component of the living they make using the outdoors,” Adler said. “They’re very knowledgeable.”

Trappers are also keen on conservation efforts, said Chuck Eaton, of West Fairlee, a well-known auctioneer and a trapper for more than 60 years.

“Every one of these guys that brings fur in is a conservationist,” Eaton said.

But it’s also a skill set and profession that has been on the decline.

Tom Gebo is full-time fur buyer based in the Adirondack region of New York. Gebo said he has observed a steady decline in the quantity of the fur available to purchase, part of which he attributes to the continual development of once-forested land.

“There’s less and less opportunities for people to trap,” he said. And with less money to be made, there is a lack of incentive for trappers.

“People did it back then. It was an income. … Now it’s a hobbyist thing,” Gebo said. “That in a sense hurts the market because it’s not supply and demand.”

Gebo was one of three fur buyers who attended the auction. In addition to attending two auctions each year in Vermont, he also travels to Canada. In his 40-year career as a fur buyer, Gebo has seen more states tightening their trapping laws or outlawing it altogether. It has become more difficult to make a living out of trapping, and buying, fur.

Fur buyers and trappers alike must be aware of the demands of the market. At the auction, economic troubles in China and Russia — lately the biggest buyers of fur — were a hot topic. Since the countries are purchasing less fur, the prices have been down.

Olson said he remembers the days when the auction used to start at 9 a.m. and continued to midnight.

There has also been a decline in the number of people who trap.

“Typical of outdoor activity, kids aren’t coming into it like they have in the past,” Adler said.

In Vermont, out of the hunting, fishing and trapping licenses the state issues, trapping counts for the fewest, said Sgt. Keith Gallant, who has been a game warden for more than 14 years.

One of his responsibilities is checking trappers for licensing, making sure the trapping is within the correct season and that the methods being used comply with the law.

While there are people who trap illegally, “it happens far less frequently than the hunting violations,” Gallant said.

There are set seasons for each animal and safety and humane practices are always being re-examined and updated, said Charlee Drury works in outreach at Fish and Game.

“Everything is very regulated. These people are highly educated,” Drury said. “They have to keep up with things.”

In the six years that Drury has attended the auctions, she has not seen negative pushback or protesters at the sales.

“It’s about education,” Drury said. “The practice of not knowing the reasons behind it can create a negative light.”

The auction also serves as a social gathering for many in the tight-knit community. Some, such as Wayne Kingsly, of Brandon, Vt., have retired from the trade but continue to attend the auction for the social aspect.

“The peak fur buying prices were in the ’70s to early ’80s,” said Kingsly, who helped found the trappers association back in 1972. He recalled auctions that would run from 9 a.m. to 2 a.m. and were attended by many more buyers.

“They would fill the floor up three or four times with fur,” Kingsly said.

Kingsly reminisced with others about the number of raccoon trappers the state used to have, the demand that once was for Vermont fur and the way of life that seems to be disappearing.

“A lot of this was done the same way it was 100 years ago,” Drury said. “It’s a definite Vermont heritage and interest.”

While the department continues outreach to recruit more trappers, the ones who remain are eager to talk about the skills and the passion that goes into it.

“I love it so much I would trap even if I didn’t get paid to do it,” Stever said.