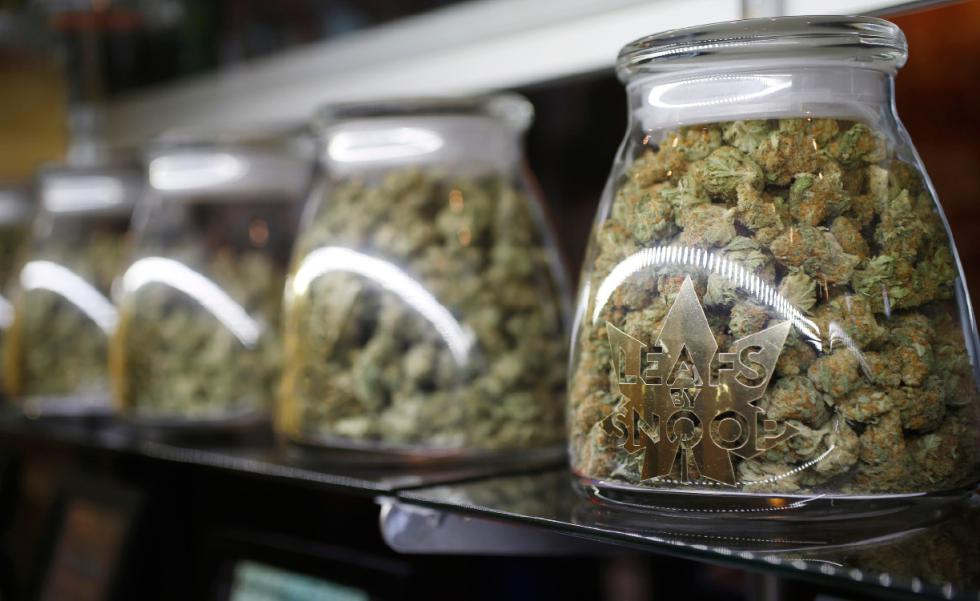 This Friday, Dec. 18, 2015, photograph, shows the logo on the front of jars of marijuana buds marketed by rapper Snopp Dogg in one of the LivWell marijuana chain's outlets south of downtown Denver. LivWell grows the Snoop pot alongside many other strains on its menu. (AP Photo/David Zalubowski)

Denver — Snoop Dogg has his own line of marijuana. So does Willie Nelson. Melissa Etheridge has a marijuana-infused wine.

As the fast-growing marijuana industry emerges from the black market and starts looking like a mainstream industry, there’s a scramble to brand and trademark pot products.

The celebrity endorsements are just the latest attempt to add cachet to a line of weed. Snoop Dogg calls his eight strains of weed “Dank From the Doggfather Himself.” Nelson’s yet-to-be-released line says the pot is “born of the awed memories of musicians who visited Willie’s bus after a show.”

The pot industry’s makeshift branding efforts, from celebrity names on boxes of weed to the many weed-themed T-shirts and stickers common in towns with a legal marijuana market, show the industry taking halting steps toward the mainstream.

Problem is, those weed brands aren’t much more substantial than the labels they’re printed on. Patents and trademarks are largely regulated by the federal government, which considers marijuana an illegal drug and therefore ineligible for any sort of legal protection.

The result is a Wild West environment of marijuana entrepreneurs trying to stake claims and establish cross-state markets using a patchwork of state laws.

Consumers have no way of knowing that celebrity-branded pot is any different than what they could get in a plastic baggie from a corner drug dealer.

“You can’t go into federal court to get federal benefits if you’re a drug dealer,” said Sam Kamin, a University of Denver law professor who tracks marijuana law.

That doesn’t mean that the pot business isn’t trying.

Hundreds of marijuana-related patents have likely been requested from the U.S. Patent and Trademark Office, according to those who work in the industry. Exact numbers aren’t available because pending patent information isn’t public.

So far, federal authorities have either ignored or rejected marijuana patent and trademark requests, as in the 2010 case of a California weed-delivery service that applied to trademark its name, “The Canny Bus.”

“They haven’t issued a single patent yet. But generally speaking, there is broad agreement within the patent law community that they will,” said Eric Greenbaum, chief intellectual property officer for Vireo Health, which is seeking a patent for a strain of marijuana to treat seizures.

Companies like Vireo are betting that if marijuana becomes legal nationally, they will be first in line to claim legal ownership of whichever type of marijuana they already have developed. Pot companies also are filing state-level trademarks, thereby avoiding the snag in a federal trademark application: the requirement that the mark is used in interstate commerce, which remains off-limits for pot companies.

In Colorado, for example, there are nearly 700 trade names and 200 trademarks registered that include the word “marijuana” or a synonym, Kamin said.

Pot producers also are claiming everything they can that doesn’t involve actual weed. So a marijuana company could trademark its logo or patent a process for packaging something, without mentioning that the “something” is marijuana.

The marijuana industry certainly has been on the receiving end of legal threats from other companies that do have trademark and patent protection.

Cease-and-desist letters aren’t uncommon in the mailboxes of marijuana companies, whether it’s for making a candy that looks like a non-intoxicating brand or for selling a type of pot that includes a trademarked word or phrase in its name.

The Girl Scouts of the U.S.A., for example, says it has sent dozens of cease-and-desist letters to those selling a popular strain of pot known as Girl Scout Cookies or another called Thin Mints.

“The use of our trademarks in connection with drugs tarnishes the Girl Scouts name,” the organization says in the letter it has sent to pot sellers primarily in California, Colorado and Washington.

But the industry can’t use those same laws to protect its own brands.

“We’re in a new industry, where the benefits of federal protection aren’t open to us,” said John Lord, CEO of LivWell, a 10-store chain of Colorado marijuana shops that recently entered an agreement to sell Leafs By Snoop, the entertainer’s new line of marijuana.

LivWell grows the Snoop pot alongside many other strains but charges up to $175 more an ounce for the rapper’s brand, which is sold from behind a glittery in-store display.

“Brand differentiation is the normal progression of events,” said Lord, who wouldn’t share sales figures on the Snoop pot but says its performance has been “outstanding.”