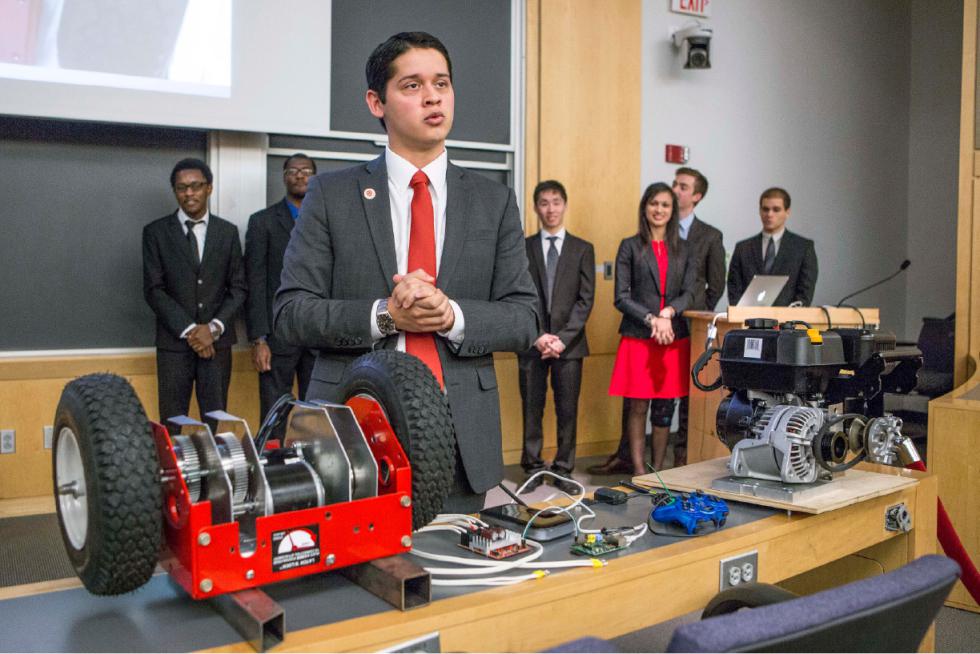 In this December 2015 photo provided by Harvard University, junior Cesar Maeda explains a robotic snow blower to a group of officials at Harvard in Cambridge, Mass. Eighteen juniors representing several engineering disciplines spent the fall semester inventing a robotic remote-control rooftop snowblower, a super-heated icicle cutter and a freeze-resistant doormat. The inventions grew out of last winters record snowfall, which stretched campus maintenance department workers to their limit and forced a campus shutdown for the first time since the Blizzard of 78. (Photo by Eliza Grinnell/Harvard University John A. Paulson School of Engineering and Applied Sciences via AP)

Boston — Winter is bearing down anew, and Harvard University students have been engineering new ways to deal with it.

The projects grew out of meetings with the university’s Facilities Maintenance Operations department, which is responsible for clearing snow from the 5,000-acre campus and was particularly challenged last winter when the Boston area got more than 9 feet of snow. Harvard shut down several times, the first time campus closed since the infamous Blizzard of ‘78.

“Don’t get me wrong, FMO did an impressive job last winter,” electrical engineering major Peyton Fine said. “But we wanted to somehow improve their operations. We wanted to make it easier to get around campus safely and keep workers safe.”

A major problem is clearing snow off Harvard’s many old and flat-roofed buildings. The main Cambridge/Boston campus has about 500 buildings.

The students retrofitted a commercial snowblower that can be controlled using a modified video game control pad and can be operated remotely, even from inside a nice, warm office. It eliminates the need for workers to spend time on slippery rooftops where they risk falling. Another potential hazard for workers is clearing icicles off eaves. The students’ research found that about 150 people a year are killed in the U.S. trying to clear snow and icicles off rooftops.

For that problem, the students came up with a device resembling a roof rake, with a long handle topped with a Y-shaped head that holds a super-heated wire that can quickly slice through the thickest of icicles while the operator stands on firm ground.

The class was one of the most practical junior bioengineering major Cassie Lowell has taken.

“It’s a unique class in the sense is that we’re given a lot of freedom,” she said. “It was a really hands-on, real-world experience.”

The students and Mooney stress that all their inventions are prototypes and won’t be deployed on campus this winter. But some of the students plan to keep working on them, with the goal of one day making them commercially available.

Fine said he’d love to walk into a hardware store in the future and see the items for sale.

“Just like someone has a leaf blower in their garage, we’d love to see someone have an icicle cutter in the garage one day,” he said.