‘Telepresence’ Robots Help at the Office 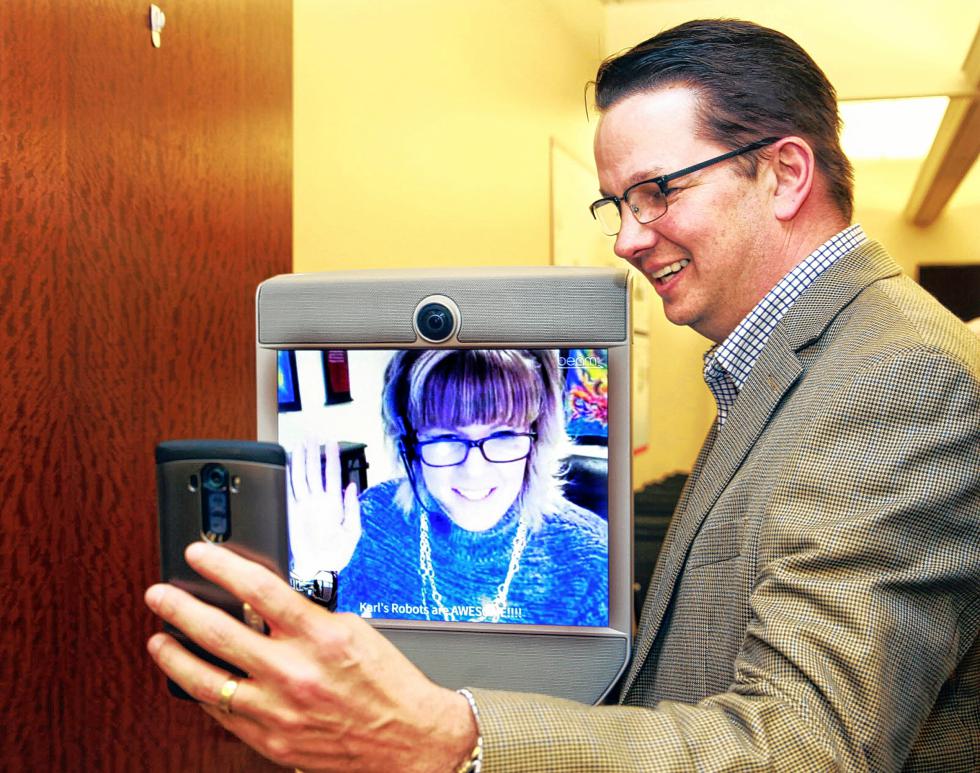 Amy Lamb, an app development consultant at Northwestern Mutual, has a severe poinsettia allergy, so she works at home during the holidays. Lamb, on screen, uses a robot that she controls from home to attend meetings at the office as seen on Tuesday, Dec. 29, 2015. Lamb's manager Tom Mullen takes a selfie of the two of them following a meeting. (Angela Peterson/Milwaukee Journal Sentinel/TNS)

At home, Amy Lamb, who works in the insurer’s software development and support area, was waiting to hear the results of their search to determine when she could return to the office. For six years, Lamb has been forced by a severe poinsettia allergy to stay away from her workplace during the holiday season.

“I’m lucky this year,” Lamb said. “(My gym) promised me they would keep the gym poinsettia-free, so I can go to the gym, my house and Starbucks.”

Lamb’s holiday season has also been enhanced by the BeamPro, a 62-inch tall robot on wheels that she can control from her home computer. Once she’s logged on, Lamb gets in front of a web camera that makes her face visible on the robot’s screen. She’s then able to move — robotically — around the office.

Using BeamPro, Lamb can attend meetings remotely. She can turn the robot toward whomever is speaking. She’s used BeamPro to join her friends for lunch in the cafeteria, and she even participated in a holiday skit.

“The cool thing this year is I actually got to see the poinsettia tree without having a reaction and got to hear the Christmas band,” she said.

The BeamPro, made by Palo Alto, Calif-based Suitable Technologies Inc., sells for about $16,000. It is part of the rapidly growing “telepresence” robot market. Annual shipments of such robots, currently at 4,200 units, could reach 31,600 by 2020, estimates Tractica, a market research firm.

Tractica says key markets for the robots are health care, education, and enterprise, where executives, for example, use them to be in multiple places at once, or to tour factories in other parts of the world. In one well-known instance, fugitive whistleblower Edward Snowden attended the TED 2014 conference in the U.S. via telepresence robot from Russia.

When Northwestern Mutual purchased 14 robots in late 2014, the perception around the company was not universally positive, said Karl Gouverneur, chief technology officer. But now, given the company’s seven buildings in the Milwaukee area, the robots have come to be viewed as important tools in helping to build a more interactive and collaborative workplace, he said.

“For a company like Northwestern Mutual, which historically has not been a place where innovation comes to mind, you’re seeing a lot more these days — and we are pushing very, very hard,” Gouverneur said.

There have been minor issues with the robots; one of them fell down a step once, and sometimes employees — most often impatient executives, Gouverneur says — leave a robot in the meeting room, rather than returning it to its docking station. Elevators present multiple challenges; the robots lose Wi-Fi connectivity inside them and can’t press the buttons for floors.

“It’s two wheels and a TV screen,” said Gouverneur, adding that the Wi-Fi issue should be improved by an upgrade that’s underway.

The technology behind the robots is mature and reliable, said Bilge Mutlu, associate professor of computer science at the University of Wisconsin-Madison. So obstacles to more widespread use are the rate of adoption and infrastructure challenges, like Wi-Fi coverage, he said.

While telepresence robots aren’t the giant leap in communication that an invention like telephones were, they represent an incremental step forward, said Mutlu, whose Wisconsin Human-Computer Interaction Lab is one of the largest in the U.S. that studies this area.

“Our research shows that embodiment adds to collaboration,” Mutlu said. “It improves trust over more impoverished versions of communication, such as just audio or video.”

Lamb says she has found that to be true. Sure, some people find it awkward initially, when they see her face on the screen of a robot moving toward them at a pace that she describes as slightly slower than a walk.

“They’ll give a little uncomfortable smile and I’ll just wave and say ‘hi,’” she said.

Lamb, who is 41 and has degrees in accounting and management information systems, said she discovered her allergy five years ago. It happened one morning during the holiday season. She walked into work and her throat swelled and her lungs felt like they were on fire, she said. Life-threatening blood pressure and pulse changes followed, and Lamb figured out poinsettias were the cause.

Poinsettia allergies are usually caused by a misdirected immune system response to proteins in the plant sap, said Mitchell Grayson, an associate professor at the Medical College of Wisconsin. They are very rare; with only a few reported cases in the scientific literature, he said.

Grayson said he found no published reports of allergies to poinsettia pollen, which is heavy and sticky to help it attach to insects rather than float away in the air. So it would be extremely unusual for someone to react to poinsettias without touching them. Still, this could be a quite unusual case of a poinsettia allergy, he said.

Lamb’s experience is that her office building must be clear of poinsettias for two weeks before she can safely return to work. Last year, after one of three unsuccessful attempts to return, co-workers found the offending poinsettia plant four floors away from her desk, she said.

The ten-person team of Lamb’s co-workers that scoured the building found a large number of poinsettias on the lower level and six more on the upper floors. They left notes on each plant asking the owner to remove it from the building. Meanwhile, Lamb’s been relying on her electronic friends to keep her connected at the office.

“I want my clients and co-workers to be confident I’m still here,” Lamb said. “I want them to know I can wheel to their desk in robot form anytime they need me.”