A Crossover That Doesn’t Stand Out 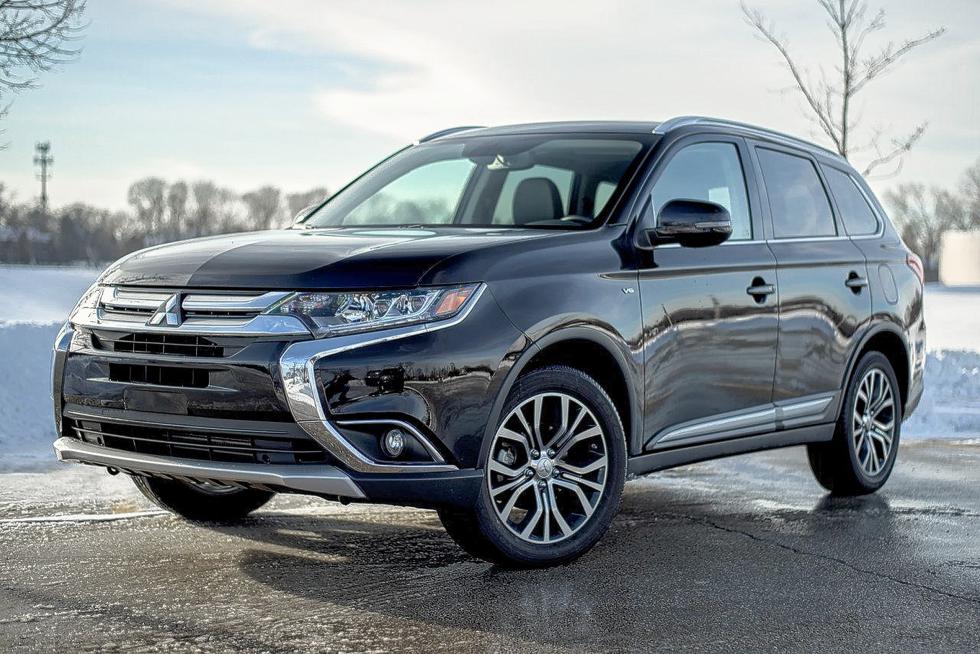 The redesigned 2016 Mitsubishi Outlander is a budget three-row crossover with good fuel economy but not much else to stand out from the competition. (Tom Snitzer)

As Mitsubishi retreats from U.S. shores, cresting at 2 percent market share in 2002 before dipping to less than one-half of 1 percent since 2009, it has cast the redesigned Outlander crossover to hook budget-minded buyers looking for good warranties and better fuel economy.

But those traits don’t quite appeal to the larger appetites of the American car buyer, which is why the three-row Outlander crossover and its smaller but better-selling stablemate, the Outlander Sport, are the Japanese company’s great American hope.

The Outlander GT that we tested, featuring a 3.0-liter V-6 engine and all-wheel drive, gives budget-minded shoppers a top-of-the-line option.

The exterior is mostly indistinguishable from the rest of the look-alike crossover class, but adds 18-inch alloy wheels and some side cladding. There might be minor dimension differences, but the Outlander is clearly a crossover rather than an SUV, especially when it comes to that third-row selling point.

But we couldn’t tell there was a third row in the Outlander until we went looking for it. More spacious — and minivan-esque — three-row utility vehicles are the Honda Pilot, Ford Explorer or Dodge Durango.

Cramming three rows in a crossover means there are some compromises. Pull straps provide easy access to flip down or pull up the third-row seating, but the headrests are stowed in the cargo floor. Too bad heads can’t be stored there for the ride because there isn’t much room.

The second-row 60/40 split seats slide forward for easy rear access, or fold down for more flat interior room. You might get away with hauling five kids — without boosters — to the birthday party or the game, but there better not be many gifts or much gear.

Fitting an adult in the third row is problematic, as it is with most three-row crossovers. It’s possible to haul out-of-towners a few miles to the graduation or other family function as long as everyone in the first two rows moves their seats forward, including the driver. A family of five will fit fine until the teen years.

The Outlander GT, with its heated leather seats and leather steering wheel, doesn’t look or feel cheap. But the cabin was loud enough to make me think I had window or door cracked, even around town.

Behind the wheel, the GT’s 3.0-liter V-6 is adequate but never fast. It’s difficult to imagine the pokey feel of the 2.4-liter engine standard in lesser trims.

While the 2.4-liter engine option uses a continuously variable transmission, the 3.0-liter GT comes with a 6-speed automatic transmission with paddle shifters that Mitsubishi calls “sporttronic.” They let the driver rev the engine as high as desired, but that and the feel of the shifters are as sporty as it gets; downshifting takes care of itself if you forget.

In the center of the console is the Super All-Wheel control button that lets the driver select between varying all-wheel drive modes, including an eco mode that reverts to two-wheel drive when four isn’t necessary.

Eco mode returned excellent fuel economy of 25.9 mpg at highway speed, though the EPA estimate is 27 mpg highway (20 city). We hit winter weather with snow covering ice that the AWD system was able to negotiate at cautious speeds without a problem in Snow mode.

There is a separate manual for the multitouch screen (infotainment), and you’re going to need it as Mitsubishi’s system is the worst we’ve tested, largely because of unrecognizable voice commands. Saying “voice command help,” as the manual suggests, consistently returned “voice command not recognized.”

Poor voice command recognition means navigation must be done with the narrow touch pad, and many of the functions can’t be used when the vehicle is in motion.

The button to access the vehicle info display for fuel economy, trip odometer or directions is inconveniently located on the left side of the dash panel, behind the steering wheel, along with controls for advanced safety features such as lane departure, part of the $3,350 GT package. Most new cars keep the vehicle info display button on the steering wheel for easy access.

Mitsubishi needs this car to resonate with American buyers, but the Outlander GT doesn’t stand out. Its flaws, particularly the loud cabin and dim infotainment system, will be enough to make shoppers look elsewhere.

Parting shot: Despite good fuel economy and a third row, the Outlander GT doesn’t stand out from the competition.