Developers Thinking Inside The Box — the Cargo Box 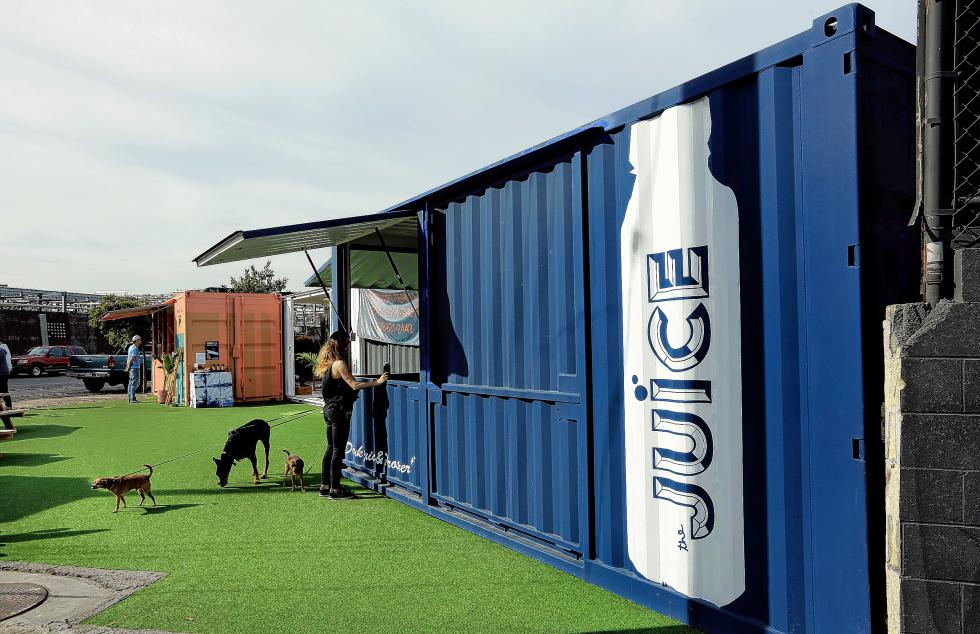 The Juice, a fresh juice and smoothie shop, has been operating out of a cargo container in the Arts District in downtown Los Angeles for four months, on January 22, 2016. The businessâ owners were won over by the coolness factor. (Mel Melcon/Los Angeles Times/TNS)

Los Angeles — Slinging fresh juices and smoothies at two shops in Los Angeles, the owners of The Juice were initially skeptical when approached with an unusual proposition for a new location: a pop-up housed in a shipping container in the city’s Arts District.

Elizabeth Halpern and her business partner, Melissa Cronkhite, questioned how many customers they would attract in the downtown Los Angeles neighborhood. What eventually won them over was the container and its cool factor.

“It’s the perfect combination of classic and new at the same time,” Halpern said. “It doesn’t feel like an eyesore. At the same time, it’s … clearly out of place. It just hits that balance.”

The distinctive metal boxes were introduced in 1956, revolutionizing international shipping. Now they have become a popular alternative for developers looking to raise quick and hip buildings that are generally cheaper than conventional structures.

The industrial containers are transforming into odd and innovative homes, offices, schools, hydroponic farms and a variety of businesses.

The Juice and its neighbor, Shreebs Coffee, have been peddling their products from containers in the Arts District for four months. In nearby Long Beach, a developer is betting that a cluster of revamped containers-turned-eateries will draw crowds eager for waffles, ramen and beer.

“They’re such a big part of our import and export,” said Kim Gros, who is putting together the SteelCraft project. “It makes sense we would use containers and be really strategic and thoughtful in how we incorporate them into our communities.”

Gros said SteelCraft will have four restaurants, a coffee shop, a florist, a farm stand and a satellite beer tasting room along with a large eating area. The project, including restrooms, involves four 40-foot cargo containers and five 20-foot containers and is set to open in May.

Smog City Brewing Co. will occupy one of the 40-foot containers. Owner Laurie Porter said the LA-area brewery had been looking to build a satellite taproom and jumped at the chance to join SteelCraft because of the cost and community of other eateries.

“We thought if we were going to open a successful satellite tasting room, we needed to bring something else to the table, and the main thing was food,” Portersaid. “The idea of opening a restaurant was terrifying and cost-prohibitive.”

Porter estimated that a location built with traditional materials would have been three to four times more expensive. “This storage container option really simplified everything,” she said.

For Bill Denton and Stephanie Morgan of vegan restaurant Seabirds Kitchen, the transition to a 40-foot container won’t be much different from their start in a 12-foot food truck. “It was pretty much what we had already done, but without the wheels,” Morgan said. “We can test the market a little bit with new items and have fun because the crowd will be a little more casual.”

International Port Management Enterprise is one of a handful of companies that has capitalized on the popularity by providing containers and architectural design know-how to clients looking for new kinds of buildings.

Since its start in 2012, the company has helped build a number of shipping container projects, including an outdoor shopping mall in Las Vegas, a school and now SteelCraft.

Commercial and residential shipping container projects make up half the company’s business, Chief Executive Bill Hinchliff said. His company is planning to move its headquarters to a bigger facility over the next few weeks to accommodate the demand.

“It’s totally hip, and it’s exploding,” Hinchliff said. “I get probably five, six requests a week from future projects and future inquiries that we can barely keep up with.”

Hinchliff sees his company as a one-stop shop for those interested in container buildings.

Once it completes a feasibility study and provides clients with the cost estimate, the company cuts holes in the boxes and reinforces openings. Then, the containers are painted and staged for interior work such as electrical, plumbing and drywalling.

“I think it’s going to pick up more steam because more and more cities are . accepting this as a viable use for construction,” Hinchliff said. Although the look appeals to the industrial-chic crowd, shipping containers might be more valuable as an introduction to modular architecture rather than a building material suitable for widespread use, said Alice Kimm, a partner at architecture firm JFAK and an adjunct associate professor at USC’s School of Architecture.

“I think most people gravitate toward the shipping container idea because I think they think it’s going to save them money and provide them a neutral space,” Kimm said.

“If the existing conditions are right, and they don’t have to do fancy foundation work and utilities are right there, it might save them money. I think it really just depends on each specific case,” Kimm said.

There are some downsides to life in a metal box.

Casey Goch, co-owner of Shreebs Coffee, said the temperature inside her Arts District pop-up can vary depending on the elements, even though there are heating and air conditioning systems. “When everything is closed, it’s nice and controlled,” she said. “But when you open it, you’re definitely like whatever it is outside.”

Halpern of the Juice said the container has been a good way to test out the location and the smaller space.

“The windows are open, you can chat with people and you can see everything around you,” Halpern said. “You don’t feel, oddly enough, contained because it’s so open and accessible.”

Gros said she hopes to replicate SteelCraft in other cities, even those without a port connection.

“People like the idea of things evolving and things changing, and that’s where containers can work in any environment,” Gros said. “I think it’s a different shared space and it allows people to feed off each other’s brand.”