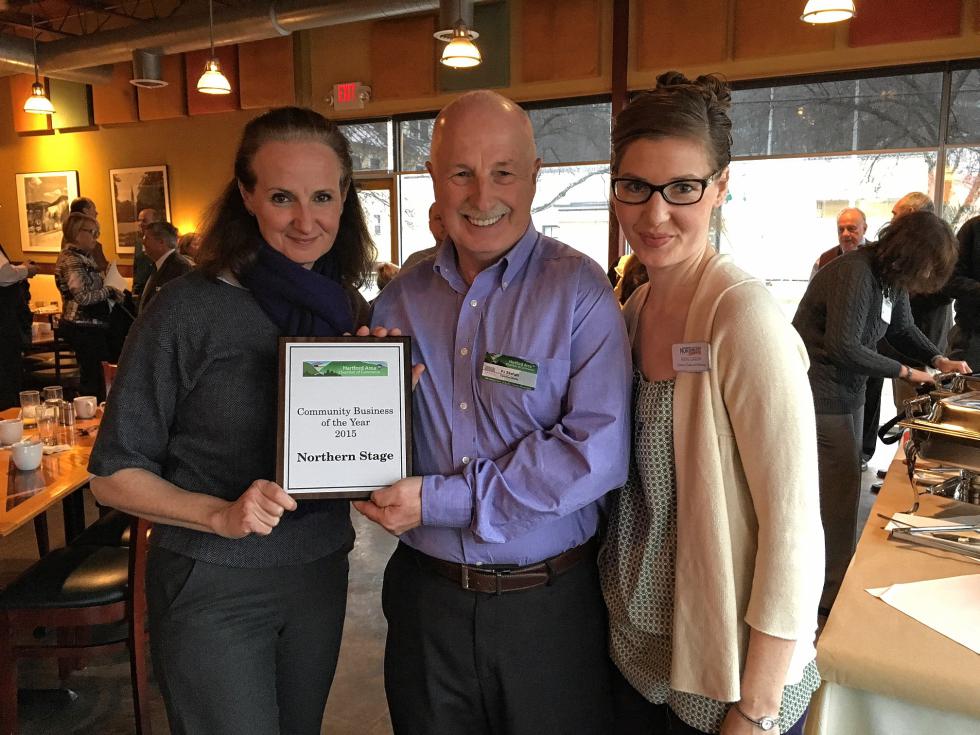 The chambers of commerce in Hartford and Woodstock last week issued their annual awards to recognize the individuals and businesses that work to support their towns.

At its annual meeting on Wednesday, held at the Tip Top Cafe in White River Junction, the Hartford Area Chamber of Commerce named Northern Stage the Community Business of the Year.

With the construction of its new theater, “Northern Stage has played a leading role in the infusion of economic development to the downtown of White River Junction,” the chamber said in a news release. The stage company’s 20-plus years of performances “have brought many visitors to the Upper Valley” and its business model “contributes significantly to our local economic stability,” the release said.

Cloverleaf Jewelry was named Chamber Partner of the Year. “Pat, Mark and Christie Pippin have embodied the mission statement of the Hartford Area Chamber of Commerce: Creating and enhancing an economic climate where area businesses and the community can thrive,” the chamber said.

The Pippins were recognized for their 20-plus years of volunteering at the Quechee Balloon Festival, their participation in chamber events and programs, and their consistent financial sponsorship of community activities.

At the annual meeting of the Woodstock Area Chamber of Commerce, held on Monday at The Woodstock Inn and Resort, chamber President Gary Thulander presented Woodstock Farmers’ Market owner Patrick Crowl with the Woodstock Area Business of the Year award in recognition of the company’s “outstanding spirit and contribution to the Woodstock area community.”

The market opened in 1992 with a staff of six, a modest selection of local and regional products, and first-year sales of $200,000, the chamber said in a news release.

“In the past 23 years, the staff has grown to 70 full- and part-timers, a huge selection of local and international products, daily sandwich numbers in the hundreds, and almost $7 million in annual sales,” the release said.

In 2009, the Woodstock Farmers’ Market was named an outstanding Retailer of the Year by the Specialty Food Association, and in 2013 the market was cited by Martha Stewart Living magazine for its “vigilant commitment to naming its food sources.”

Mon Vert Cafe, owned by Sam DiNatali and her mother, Sandy, was named the Woodstock area’s New Business of the Year.

The chamber cited its investment in and commitment to the Woodstock area community. Since opening in January 2015, the owners bought new equipment, expanded the cafe’s hours and menu, redecorated and nearly doubled their gross, the chamber said in the release.