Home » Upper Valley Business News » ‘Shut Up, My Spot Is On’ 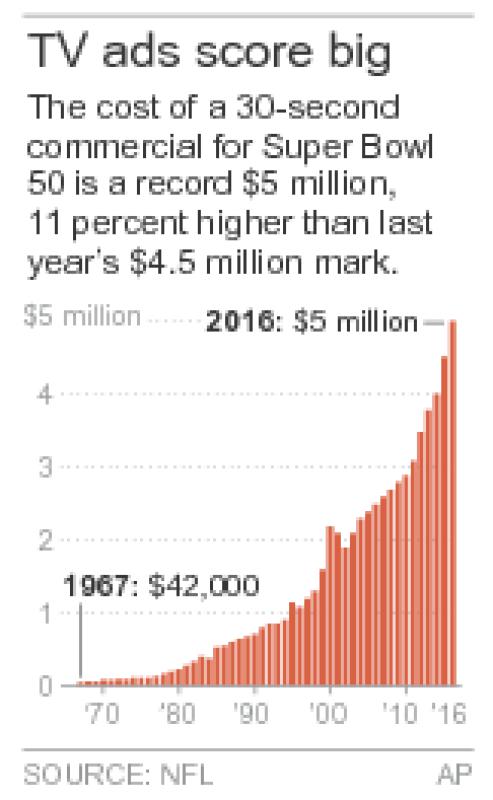 Los Angeles — Who was the least valuable player in last year’s Super Bowl? Viewers might say it was the tousle-haired young boy in the Nationwide Insurance spot, talking about all the cool things he missed because he was killed in a household accident.

Headline writers dubbed it the “Dead Kid” commercial. Social media buzzed with outrage. The company was forced to issue a statement explaining it didn’t mean to upset anyone. Nationwide’s chief marketing officer soon left his job.

Such are the risks of running a commercial in the biggest annual television event. But the advertisers who are paying close to $5 million per 30-second spot to be part of Super Bowl 50 on CBS know that their high-profile role in the event means they are going to be judged as much as the players and coaches on the field.

The pressure has heightened because the Super Bowl is becoming a rare species in television: People watch it live, on a TV set, instead of recording it for later or streaming it on a smartphone or other device.

When an average of 114 million viewers watched the New England Patriots’ heart-stopping victory over the Seattle Seahawks on NBC last year, it marked the sixth time in the last seven years that the Super Bowl has set a new record for the largest U.S. TV audience ever.

The game’s surging popularity has advertisers paying more each year to be a part of the surest bet to reach the most TV viewers in one shot.

Kantar Media reports Super Bowl ad spending has gone from $205 million in 2010 to $347 million in 2015 — a period where overall TV ad revenue growth has flattened out. The average cost of a 30-second Super Bowl commercial in that time has risen from $3.1 million to $4.4 million. Ad Age Datacenter projects spending on Super Bowl 50 will hit $377 million this year, with the average spot selling for $4.8 million.

At that price, advertisers need to deliver not just a commercial, but a piece of entertainment content that will compete for a place in the national pop culture conversation.

“When we’re working on a Super Bowl ad I tell our people to create something that will make you want to be able to stand in front of the TV set and tell everybody ‘shut up, my spot is on.’ It’s your time to shine,” Angelo said.

That need to stand out has also driven up the cost of making Super Bowl spots to $2 million and higher — a boon to Los Angeles-based post-production houses, producers, directors, animation companies and visual-effects shops used to enhance commercials.

This year’s batch includes a lineup of movie stars including Seth Rogen and Amy Schumer for Bud Light, Ryan Reynolds for Hyundai, Alec Baldwin for Amazon and rapper Drake in a T-Mobile commercial.

It wasn’t always this way. In the 1970s, networks that didn’t have the game could still earn massive ratings by airing first-time telecasts of theatrical movies such as “Gone With the Wind” and “The Godfather.” It was the era when ABC, CBS and NBC dominated, before the proliferation of cable, home video players and streaming services made almost every film readily available.

“The Super Bowl didn’t have much significance then,” said Joe Pytka, the Los Angeles-based director of dozens of Super Bowl ads. He recalls that the Academy Awards telecast was the most prestigious advertising platform until the early 1980s.

Many of the messages of the Super Bowl spots in those early years reflected the sober economic environment of the time and did not require spectacular creativity.

As the Big Three auto companies saw imports eat into their market share, the high-profile ad campaign of Super Bowl VII in 1975 was from Chrysler, offering $400 rebates to customers to move vehicles out of its overstocked dealerships. A shift began when Apple and its ad agency Chiat Day chose Super Bowl XVIII to introduce the Macintosh personal computer with a spot called “1984,” directed by Ridley Scott, the English filmmaker known at the time for Alien. The dystopian-themed ad, which showed a hammer-throwing woman destroying a giant screen that displayed a Big Brother-like figure, was produced for a then eye-popping $400,000.

After being exposed to the 77.6 million viewers watching the game, Apple’s “1984” received the kind of free publicity not seen since President Lyndon Johnson’s famous 1964 campaign ad “Daisy,” which showed a little girl picking petals during a nuclear blast countdown. As with that spot, TV news programs replayed “1984” in its entirety, giving Apple exposure that went well beyond the $450,000 paid to run it in the game. “That really set the bar for ads to do more than sell,” Angelo said. “They had to have gravitas. They had to provoke.”

The competition to break out on the Super Bowl became gladiatorial with the rise of USA Today’s “Ad Meter.” In 1989, Gannett Co.’s newspaper began using a research firm to test audiences’ reaction to the ads and rank their popularity. Several dozen people were gathered in an undisclosed location and handed what looked like oven dials that were turned up or down in response to what they saw.

Within a few years, the published results became part of the post-game chatter on Monday mornings, and the Ad Meter annually struck fear in the hearts of advertisers and agency executives.

“Back in the day, we couldn’t tell people where it was going to be,” said Dottie Enrico, a former USA Today reporter now with the American Association of Advertising Agencies. “We thought that trucks of Pepsi or fleets of Chevy trucks would show up.”

Soon advertising executives had bonuses written into their contract based on a high Ad Meter ranking for a Super Bowl spot. The publication’s rankings are still anxiety-producing enough for some companies to avoid the game altogether.

“There are advertisers who run commercials in NFL games all season that do not go into the Super Bowl because they don’t want their creative to be judged by the Ad Meter,” said Jo Ann Ross, president of Network Sales for CBS. Pytka, who has directed several first place winners in the Ad Meter, believes the public competition improved the quality of the commercials in the game. “The Ad Meter made people aware that viewers want to be entertained when they watch television, especially in the Super Bowl,” said the director, whose spots for Budweiser, Pepsi and Nike have ranked among the most popular over the years. “When you’re spending time with somebody, make their time valuable. Don’t bore them.”

In 2000, Super Bowl commercials reached an even higher level of consumer consciousness, thanks to an influx of advertisers that emerged during the Internet bubble.

Fueled by their inflated stock prices, new e-commerce companies looking to make an impact on consumers rushed to buy time on the game. On Madison Avenue, the game is remembered as “the Dot-com Bowl.”

“It was the first time anyone sold a spot in the Super Bowl for $3 million, which was considered an extraordinary number in 2000,” said Ed Erhardt, who heads global sales and marketing for ESPN. “And that was driven by that exuberance around how quickly you could make your brand name known on one day.”

Most of the tech startups that ran commercials in that game (remember the Pets.com sock puppet?) either went out of business or were folded into other companies. But the digital revolution that turned those firms into collateral damage altered the way marketers use the Super Bowl commercial and how viewers watch them as online streaming video reached critical mass.

It was long typical of advertisers to keep their Super Bowl spots under wraps until the game. Now such secrecy seems quaint. Combining Super Bowl ads with an online marketing push is now standard procedure.

In 2015, YouTube users spent 840 million minutes watching Super Bowl ads — an increase of 127 percent over 2014. YouTube says 37 percent of those views occurred before the kickoff of Super Bowl XLIX.

David Bushman, television curator for the Paley Center for Media, said the tipping point for Super Bowl ad viewing online occurred in 2011, with the popular Volkswagen ad called “The Force,” showing a kid in a Darth Vader costume using his powers to control his family’s Passat. The German carmaker agreed with its ad agency Deutsch that the 60-second version of the spot was worth exposing earlier online, and it was viewed 17 million times before game time.

“It was transformative,” said Bushman. “It became more than just a commercial. It became a marketing campaign strategy that the commercial was just one part of.”