What Unites Congress? Scorn For Shkreli 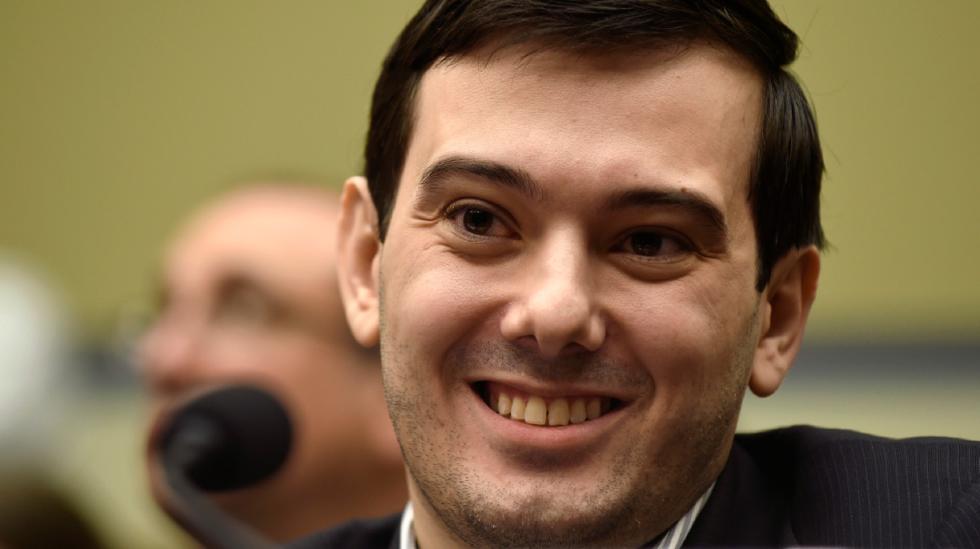 FILE - In this Feb. 4, 2016 file photo, Pharmaceutical chief Martin Shkreli smiles on Capitol Hill in Washington during the House Committee on Oversight and Reform Committee hearing on his former company's decision to raise the price of a lifesaving medicine. Shkreli briefly united Democrats and Republicans on Capitol Hill this week, as lawmakers took turns blasting the price-hiking former CEO who has become the new poster child for corporate greed. (AP Photo/Susan Walsh)

But the gridlocked state of Congress virtually assures federal efforts to lower drug prices will remain in limbo for years. And even then, experts warn that the options available to Congress would not stop companies like Turing Pharmaceuticals, where Shkreli engineered a 5000 percent price increase of a critical anti-infection drug.

For now, experts say the worst lawmakers can do is give price-gouging executives a verbal lashing before their committees. Richard Evans, a pharmaceutical analyst for SSR, says that won’t be enough to deter some companies.

“If you’re willing to take a public shaming — and that’s the only counterweight to a price increase — then you can take the price increase,” he said.

Lawmakers from both sides of the aisle took their best rhetorical shots at Shkreli on Thursday, but he was mostly mum. The 32-year-old entrepreneur repeatedly declined to answer questions, citing his Fifth Amendment right to avoid self-incrimination.

When lawmakers suggested that legal defense shouldn’t stop him from talking about his tenure as Turing’s CEO, Shkreli retorted: “I intend to follow the advice of my counsel, and not yours.”

Concerns about sky-high drug prices have been building for years but boiled over this fall after stories about Turing and Canadian drugmaker, Valeant Pharmaceuticals, hiking prices for previously low-priced medicines for patients with heart problems and other life-threatening conditions.

Many pharmaceutical companies increase prices annually as a matter of doing business. But the staggering size of the hikes by Turing and Valeant drew congressional interest.

Valeant bought two life-saving heart drugs last February and promptly hiked their prices, tripling one and raising the other six-fold.

It’s an approach that’s attracted unprecedented media coverage and seemed to confirm the public’s worst fears about pharmaceutical companies: that they are more Wall Street-driven investment vehicles than actual developers of medicines.

But while congressional scrutiny has weighed on pharmaceutical stocks, including Valeant’s, industry analysts have repeatedly reminded investors that the chances for real action to curb prices is low.

“Congressional Republicans, the majority in both houses of Congress, oppose regulating drug pricing and will stop all attempts by congressional Democrats to do so,” Evercore ISI analyst Terry Haines advised clients, in a recent note.

Even if Democrats take back control of the Senate later this year, Haines said, they would lack the votes there and in the House to move reforms on pharmaceutical pricing.

Unlike many other developed countries, the U.S. government has never set price controls on prescription medicines. And efforts to give federal health plans like Medicare — the largest drug purchaser in the nation — more negotiating power have repeatedly failed to pass Congress.

Instead, drugmakers deal with a fragmented web of public and private insurance providers, resulting in limited discounts that are well below those available in many parts of the world. For example, new cancer drugs are generally available in Europe for 20 to 40 percent less than their U.S. list price, according to analysis firm IMS Health.

Even with major changes to programs like Medicare, analysts say there would still be little to stop companies from hiking prices of drugs when they are the sole provider, as in the case of Turing and Valeant.

Evans says more targeted solutions would be needed to address those cases, which he calls “the sociopathic extreme of drug pricing.”

For instance, the government could potentially allow emergency importation of cheaper versions of a drug from overseas. But that technique has only ever been used when a drug is in short supply — not merely overpriced.

As with other changes, emergency importation would require action by Congress or administration officials. And with Washington turning its attention to the upcoming elections, Evans questions whether there is enough political momentum to make those changes.

“I think for this issue, the immediate grass-roots urgency is probably not where it was a few months ago,” he said.