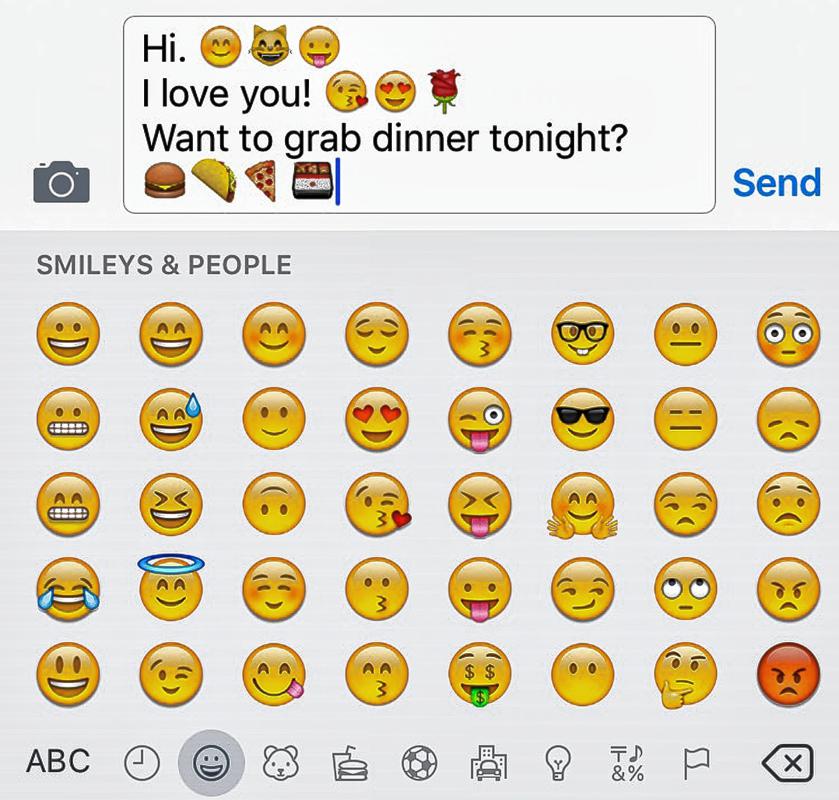 Emojis have been one of the biggest communication breakthroughs since people took to the Internet. (Screenshot/TNS)

San Francisco — When the Oxford English Dictionary declared an emoji its 2015 word of the year, it was a bit of a head-scratcher.

The emoji it singled out — an image of a laughing yellow face crying tears of joy — did not fit most people’s definition of a word. To some, it was even less of a word than shortlisted nominee “lumbersexual” (a young urban man who cultivates an appearance and style of dress suggestive of a rugged outdoor lifestyle).

But for linguists around the world, the announcement wasn’t about whether the Oxford English Dictionary had lost it. (It hadn’t — most linguists agree a word is a discrete unit that is meaningful; emoji fit that definition.) Rather, it was a recognition of the enormous effect yellow smiley faces and other colorful emojis representing food, animals and hand gestures have had on the way people talk online.

Aside from widespread adoption of the icons, which began after Apple made emojis available on its iOS mobile operating system in 2011, with Android following in 2013, emojis have been one of the biggest communication breakthroughs since people took to the Internet.

Look at it this way, Evans said: There are estimates that as much as 70 percent of the meaning we derive from a face-to-face encounter with someone comes from non-verbal cues: facial expressions, intonation, body language, pitch. Which means words account for only around 30 percent of what we say.

As an example, he noted the huge difference in meaning between saying “I love you” as a statement with a falling intonation as opposed to “I love you?”

Move this online, where emails, text messages and instant messages mostly allow us to communicate with words, and you can see how messages can lose their meaning or be misinterpreted. Evans even has a term for it: the Angry Jerk Phenomenon.

“You’ll recognize it instantly,” he said. “You get an email from someone who you know to be calm and sane, and they come across as a completely angry jerk. When you press the send button on a message, the instant it is sent, you lose control over how it’s interpreted.”

A December report from Bloomberg found that 8 trillion text messages are sent each year. That’s a lot of opportunities for a message to be misinterpreted.

Emojis originated in Japan in the late 1990s, when wireless carriers created sets of digital stickers people could use in text messages.

Elsewhere, people had long used emoticons — visual expressions strung together using symbols such as parentheses, dashes and colons, like 🙂 to denote a smiley face. Where text took the empathy out of messages, emojis and emoticons put it back in.

But emojis quickly surpassed emoticon use for two key reasons: There’s a lot more that people can communicate with emojis. (“I can make an emoji that’s a whale or a penguin,” said Internet language expert Gretchen McCulloch. “I don’t even know how I would do that with emoticons.”)

And once emojis were incorporated into Unicode — an international system that standardizes characters across different operating systems so when you type “:-)” into your iPhone or Android phone, the symbols automatically turn into a yellow smiley face — they became accessible and easy to use.

Add to that the belief that “humans as a collective species are programmed to use visual communication” (that’s from linguist Neil Cohn, whose own research focuses on how people have a biological inclination to draw things), and emojis became a no-brainer for digital communication.

Language experts note that the real innovation behind emojis lies in their ability to help people online say what they mean, so when they write “What the heck?” they can signify with an accompanying laughing emoji or an angry-faced emoji whether their statement is an expression of amusement or outrage.

The system might grow to include an emoji for every facial expression, gesture, food or flag. Or, as Cohn, the linguist, hopes, as the system matures, people will want fewer, but more useful emojis.

“Why isn’t there an emoji of someone with a face that has rolling eyes?” he said. “That would be really useful.”