Business of Agriculture: The threat of falling oil prices 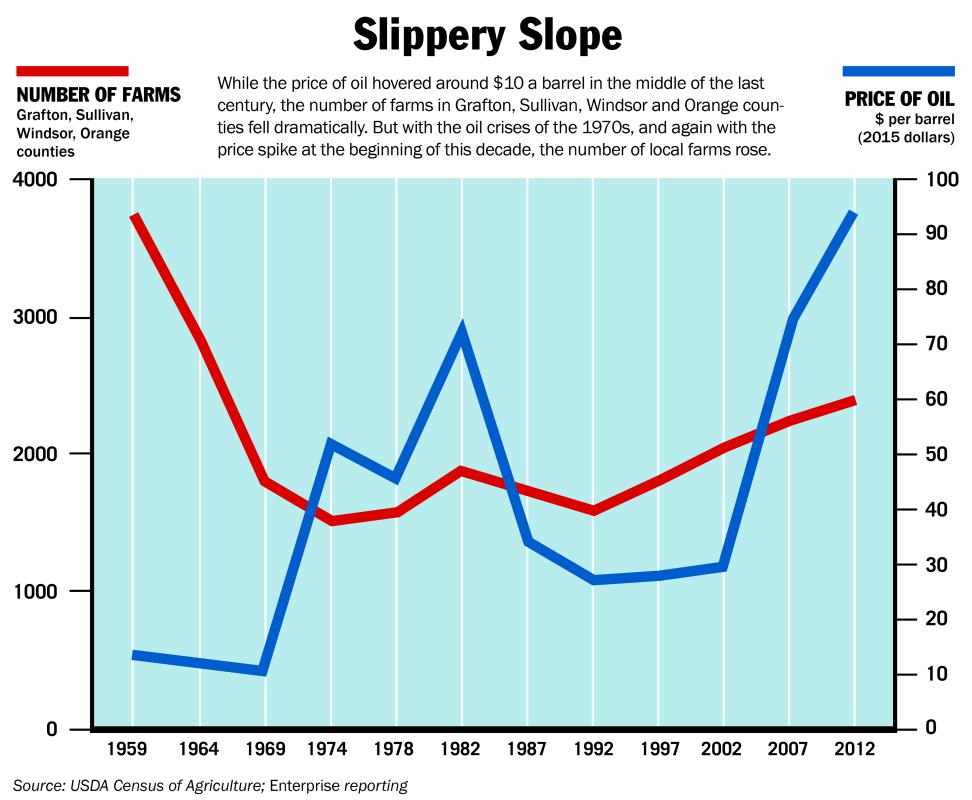 Can fruit and vegetable farms in the Upper Valley survive the tumbling price of fuel? That’s a question I’ve been thinking about lately, with more than a little alarm, as both gas and diesel have fallen below the $2 per gallon mark. That’s less than half of what they were a few years ago.

You might think that tumbling fuel prices would be good for local fruit and vegetable farmers, since we use gas in our trucks, diesel in our tractors, and propane to heat our greenhouses and buildings. That’s true — our costs are falling, which is helpful. But the price of produce from California is falling even faster, making the spread between local and industrial produce wider than it usually is and pressuring local farms on the revenue side. Compared with California, where the bulk of U.S. fruits and vegetables are grown, our farms rely more on human labor and less on fossil fuels, and the transportation costs to reach our markets are lower.

The U.S. Department of Agriculture studied this effect in a 2013 paper appropriately titled “How Transportation Costs Affect Fresh Fruit and Vegetable Prices.” The USDA noted that the cost of fresh veggies on the wholesale market is much more dependent on the price of oil than other agricultural commodities because vegetables have a short shelf life, need to get to market quickly, and typically require refrigeration all along the way. This means they travel around North America via trucks, rather than via the barges, ships and trains that carry grains, frozen meats and other less perishable commodities. Trucks require more fuel per food-mile than their slower brethren.

In analyzing data from the previous decade, the USDA found that, on average, a doubling of oil prices led to a 27 percent increase in the price of vegetables in wholesale markets around the country.

They didn’t study the affect of tumbling oil prices, since that wasn’t an issue in the early 2000s, but presumably the effect is reversed, if perhaps muted, since retailers are often slower to lower prices than raise them.

More dramatically, the study found that the New England market was most affected by changes in oil prices because we’re the farthest from California by road. The doubling in oil prices led to a 47 percent increase in wholesale vegetable prices in the Boston market. Call it 50 percent by the time you reach the Interstate 89-Interstate 91 interchange here in the Upper Valley.

This is correlation, not causation, with a bunch of other factors influencing the number of farms in business locally, including the back-to-the-land movement of the 1970s, various health scares associated with industrial food, a growing buy-local emphasis in the Twin States, a renewed emphasis on taste and flavor and freshness in the produce aisle, and a shift from bulk commodities (milk) to direct sales (meat and vegetables). Nevertheless, the oil-farm correlation persists through all of these transitions.

Valley Food & Farm, a program of Vital Communities in White River Junction, completed a local market assessment last year showing that 40 percent of residents surveyed were deterred by price when deciding whether to buy locally produced food. Falling oil prices will mean that more people eat more vegetables, which is good, but they will buy fewer of them from local farmers, which is not good if you happen to be a farmer. Local lettuce is an easier sell at $3 per head when it’s next to California lettuce at $2.75 per head, rather than at $1.99 per head. It’s especially tough when selling to local restaurants, who have access to vegetables at the wholesale price.

On the bright side, Vermont’s Farm to Plate initiative recently announced that 5,387 new jobs have been added to the local food economy since 2009 and that Vermont, which already leads the nation in the percentage of food purchased from local sources, is on track to double that percentage ahead of the 2021 target date. Many things are driving the demand for local food, besides just price. If farmers focus on taste, quality, freshness, variety and flavor — attributes the California farms can’t match — the local farm boom is likely to continue.

Other attributes of local food — such as a reduced carbon footprint, local jobs and keeping money in the local economy — also will benefit local growers.

It’s just that we’re about to find out how much these less-tangible factors matter to local consumers as the price of oil, which has been something of a tailwind over the past two decades, turns into something blowing more distinctly into our faces.