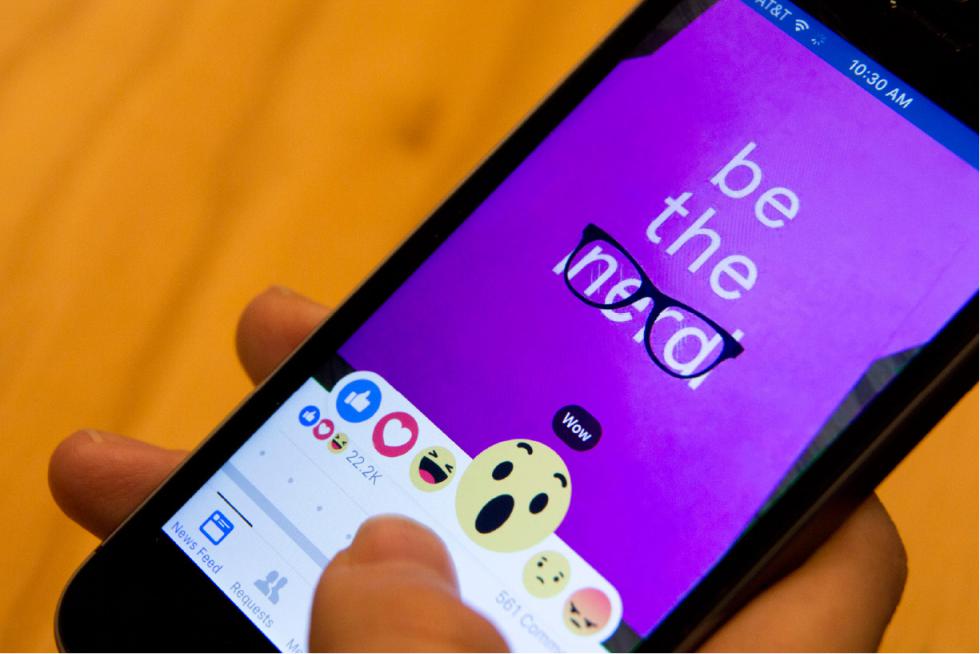 In this Thursday, Feb. 18, 2016 photo taken in New York, Julie Zhuo, product design director at Facebook, demonstrates the new emoji-like stickers customers will be able to press in addition to the like button. Facebook's Like button is getting some company, as the company rolls out alternatives worldwide after testing in a few countries. (AP Photo/Mary Altaffer)

New York — Facebook’s “like” button isn’t going away, but it’s about to get some company.

Facebook has been testing alternatives to “like” in about a half-dozen countries, including Ireland, Spain and Japan. On Wednesday, Facebook started making “haha,” “angry” and three other responses available in the U.S. and the rest of the world.

In changing a core part of Facebook — the 7-year-old “like” button has become synonymous with the social network — the company said it tried to keep things familiar.

The thumbs-up “like” button will look just as it long has, without the other choices cluttering the screen or confusing people. You have to hold that button or mouse over the “like” link for a second or two for the alternatives to pop up.

Here’s a look at Facebook’s latest feature, known as Reactions.

When a friend posts that his father has died, or a cousin gets frustrated with her morning commute, hitting “like” might seem insensitive.

Users have long requested a “dislike” button, but that was deemed too negative and problematic. Are you disliking the death or the call for sympathy?

Facebook went through comments on friends’ posts, as well as emoji-like stickers people were using. It chose the most common ones and tested those.

Facebook considered dozens of reactions — but offering them all would have been confusing. Think of having to flip through pages and pages of emojis: Do you want one wink, a tear, a full frown or a half frown?

Facebook ultimately chose these six reactions for their universal appeal — something that could be understood around the world. Even a generic happy face “was a little bit ambiguous and harder for people to understand,” Zhuo said.

Each reaction comes with an animated emoji, such as the thumbs up for “like” and a heart for “love.” These emojis will look the same around the world, but phrases such as “love” will be translated.

Zhuo said people click on “like” more than a billion times a day, so “we didn’t want to make that any harder.” It’s still the go-to reaction for most posts.

But Zhuo said in the countries tested, people used the alternatives more frequently over time.

How To Get Started

The rollout is expected to take a few days to complete. You’ll get the feature automatically on Web browsers, but you’ll need to update your app on iPhones and Android devices (no word yet on Windows and BlackBerry).

Facebook already shows how many people like a post and lets you tap or click on the count for a list of people. With Reactions, you see how many people have reacted in some way, along with the top three reactions, such as “love” followed by “haha” and “wow.” You can get breakdowns for each reaction — the total and specific people. If you don’t update your app, you’ll just see the number of likes.

Once you have this, you can start marking older posts as “wow” or “sad,” too.

Facebook has a complex formula for deciding which of your friends’ posts are more prominent. Ones that get a lot of likes, for instance, will tend to show up higher. Now, posts marked “angry” or “wow” will bump up, too. But Facebook wants to show what it thinks you’re most interested in — and that might ultimately mean mostly happy posts, rather than ones that evoke sadness or anger. Zhuo says Facebook will tweak its formulas based on how people respond.

These alternative reactions are for all posts, including those from groups and brands. A company won’t be able to block the ability to mark its posts with anger.

It Took a Year to Develop

Why so long? Besides deciding on how many and which specific reactions to offer, Facebook needed to figure out the right way for people to discover and use it. For instance, a menu might have been harder to find, while offering all six buttons up front might have made it harder to just quickly “like” a post and move on. Zhuo said CEO Mark Zuckerberg pushed for the long-press method as a balance. The feature is expected to evolve over time, and Facebook may add or change choices based on feedback.