A Hybrid With All the Essentials

Home » Upper Valley Business News » A Hybrid With All the Essentials 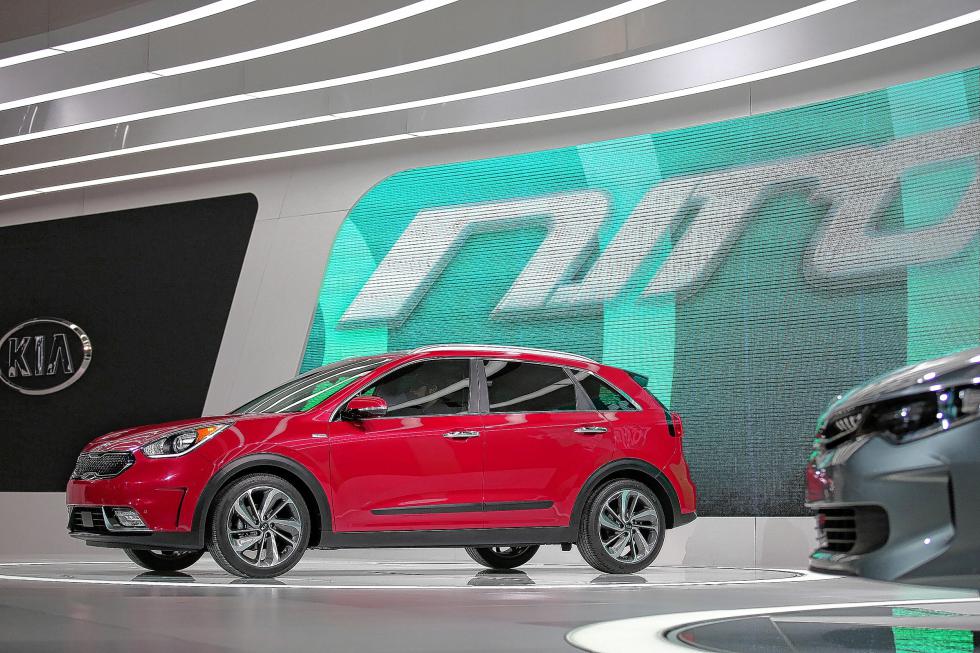 Kia debuts the Niro during the media preview day at the Chicago Auto Show on Thursday, Feb. 11, 2016, at McCormick Place in Chicago. (Anthony Souffle/Chicago Tribune/TNS)

The all-new 2017 Kia Niro could be described as a hybrid utility vehicle, which Kia prefers, or it could be classified as a subcompact crossover, which is the hottest new segment, or we could just call it a Subaru look-alike with Prius economy.

The Niro is one of 11 Eco Dynamics models that Kia has planned by 2020. The 2017 Kia Optima Hybrid and Kia Optima Plug-in Hybrid preceded the Niro on stage at the debut during the 2016 Chicago Auto Show. The Optima is Kia’s best-selling model. But the Niro gets its own dedicated platform that will help Kia triple its “global green car lineup,” according to Kia.

A plug-in hybrid is planned.

As far as trying to create a new segment, Kia has something that might make Subaru reconsider its powertrain options.

The small crossover with the hybrid powertrain gets a targeted 50 mpg. In a year or two, when gas prices return to 21st century levels, that may make a whole lot of current car buyers green with eco-envy.

“The Niro hits the sweet spot by offering the best combination of outstanding mpg, an engaging driving experience, utility and most importantly, a stunning design that doesn’t shout ‘hybrid,’” Orth Hendrick, vice president of product planning, said in a statement.

The body is a blend of high-strength steel and aluminum on the hood and rear gate to reduce weight and earn its eco cred.

With rocker cladding on the bottom of the doors, roof rails and a rear skid plate, it looks like an Outback in a beefed up Crosstrek body. Or maybe even an Impreza wagon.

It has a wide stance and low profile with short overhangs that push the axles to the edges. One colleague, Andrew Krok of Roadshow, remarked that the nose looked like the Mazda CX-3 subcompact crossover. The wheelbase is 106.3 inches, smack dab in the middle of the Crosstrek and Outback, and five inches longer than the boxy but charming Kia Soul. It’s the same exact wheelbase as the Prius.

The grille is distinctly Kia.

Kia says the seating position is higher up like the Soul, and the battery pack is under and behind the rear seats like the Prius, so you can lay the cargo floor flat for easy storage and versatility. Kia says Niro has better cargo area than Ford C-Max hybrid and the Toyota Prius. And no split hatch window. Win.

Even with the rear seats up, there is plenty of storage for a road-tripping family of four. Unlike the Soul, Kia has emphasized noise cancellation on the interior. Kia’s UVO infotainment system is better than Subaru’s and Toyota’s, so it’s got that going for it, which is nice.

The body and platform aren’t the only new thing about the Niro. It’s powered by an all-new 1.6-liter direct injection four-cylinder engine paired to a 43-horsepower transmission-mounted motor to make 146 horsepower total and 195 pound-feet of torque. We’ll take torque over horsepower in a crossover any day, and that nearly doubles the 105 pound-feet of torque in the Prius, and bests the Outback’s 174 pound-feet.

Specs are specs, but Subaru better watch out.

A familiar six-speed dual-clutch transmission helps deliver that torque to the wheels. “Gone is the mushy feel of the typical CVT hybrid,” Hendrick said.

Kia says its transmission is better than a continuously variable transmission. Surprisingly, that line in the presser wasn’t addressed directly to Subaru.

Even more surprising is that the Niro is front-wheel drive.

You can’t out-Subaru the Outback with two-wheel-drive.

But, like DeNiro said in Casino, there are three ways of doing things around here: the right way, the wrong way, and the way Niro does it.