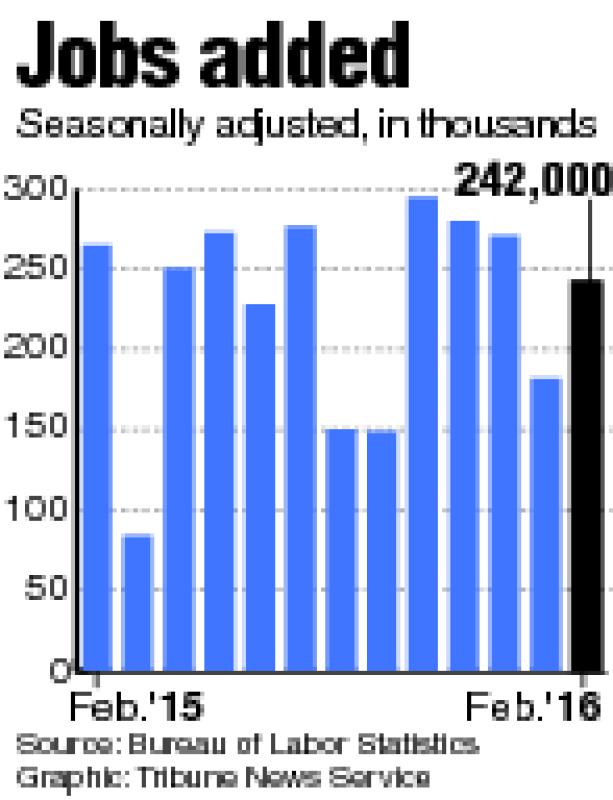 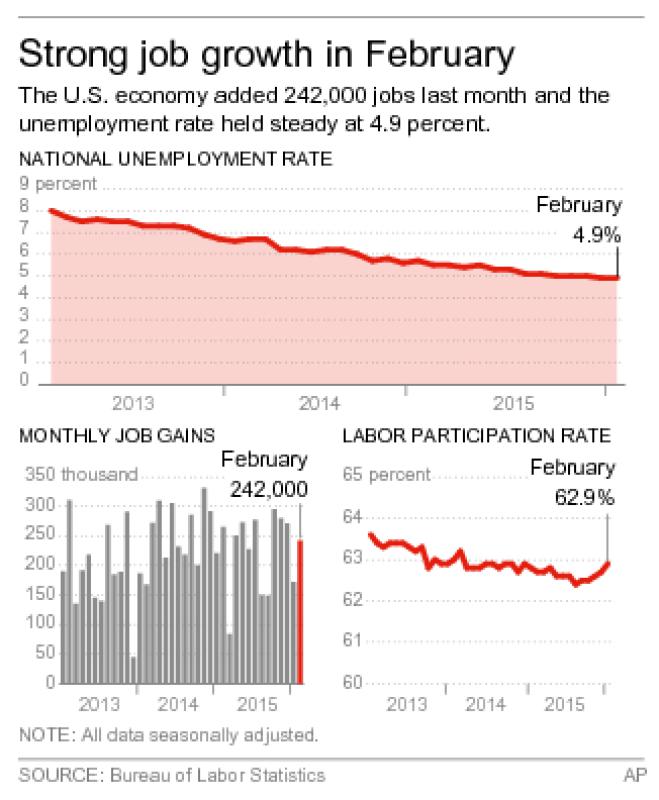 Washington — A robust February jobs report showcased a resilient U.S. economy just as fears of a new recession had begun to surface.

Economic reports in recent weeks had fueled anxieties about a looming downturn: Manufacturers were slumping. Stocks had plummeted. China was slowing sharply along with other emerging markets. The rising dollar had crushed exports.

But last month, U.S. employers sent a clear message of confidence. They added a healthy 242,000 jobs, while the unemployment rate held at a low 4.9 percent, the government said Friday. The gains showed that the economy is surmounting its challenges without suffering much damage.

Retailers, restaurants, construction firms and health care providers — the core of consumer demand and vital fuel for economic growth — drove much of the hiring.

Worker pay did slip last month after having picked up in January. But more Americans began searching for jobs and found them. That lifted the job market’s participation rate — the proportion of adults either working or looking for work — to a 13-month high of 62.9 percent.

Friday’s jobs report will factor into an increasingly tense presidential race. Hillary Clinton, the Democratic front-runner, has cast herself as the logical successor to President Obama and his stewardship of the economy. The Republican hopefuls have spotlighted what they call the economy’s failures, blaming tax rates and Obama’s signature health care program for stagnant incomes and the loss of blue-collar jobs.

February’s job growth could also give the Federal Reserve a path to raise interest rates again as early as June, according to many economists. Prior solid job growth had led the Fed to raise rates from record lows in December before it paused at its January meeting in the face of global pressures, falling oil prices and subpar inflation.

“It’s probably a better than a 50 percent proposition that they will raise the rates in June,” said Kevin Logan, chief U.S. economist at the bank HSBC.

Hiring by employers that are directly linked to consumers has more than offset layoffs at manufacturers and fossil fuel companies — two sectors squeezed by the pressures of uncertainty in China, sluggishness in Europe, declining oil prices and a stronger dollar.

Job losses in mining — which includes the battered energy industry — have totaled 140,400 in the past 12 months. And manufacturing has added just 12,000 jobs over that time.

Consumers have provided the foundation for much of the job market’s improvement in what’s become something of a self-sustaining cycle. The nearly 2.7 million workers who have been added over the past 12 months have bolstered spending on autos, housing and meals out.

That spending has sustained U.S. economic growth, even as other indicators have signaled a possible drop-off. China, the world’s second-largest economy, is struggling with high corporate debts and slower growth. Oil prices have tumbled amid relatively low demand. The strong dollar has eaten away at exports.

For years, tepid pay growth was one of the key weaknesses of the economic recovery. Many of the jobs created in the wake of the Great Recession were in lower-paid occupations — from cashiers, waiters and store clerks to home health aides and temporary workers.

But in recent months, wage gains started to tick up. The increases bolstered hopes that a lower unemployment rate had prompted companies to raise pay. Yet between January and February, earnings fell slightly in a clear setback.

Economists were searching for explanations for the sudden reversal given the otherwise strong jobs report.

Ian Shepherdson, chief economist at Pantheon Macroeconomics, noted that wages might have slipped last month because of the timing of the survey for the jobs report. It occurred before Feb. 15, possibly missing a payday for workers who are paid semimonthly. Wage growth is often weak when the jobs report survey week doesn’t include the 15th of the month, Shepherdson noted.

The government on Friday also revised up its estimates of job growth in December and January by a combined 30,000. Over the past three months, employers have added a strong 228,000 jobs.

Some businesses intend to ramp up hiring further.

The Michigan-based moving company Two Men and a Truck says it plans to add 1,000 workers or more starting this month. Demand for movers has picked up as more people are settling into apartments and newly purchased housing.

“Really, the only thing that holds us back from growth is not having enough employees,” said Sara Bennett, the company’s human resources director.