Blowing Up Hoverboards on Purpose 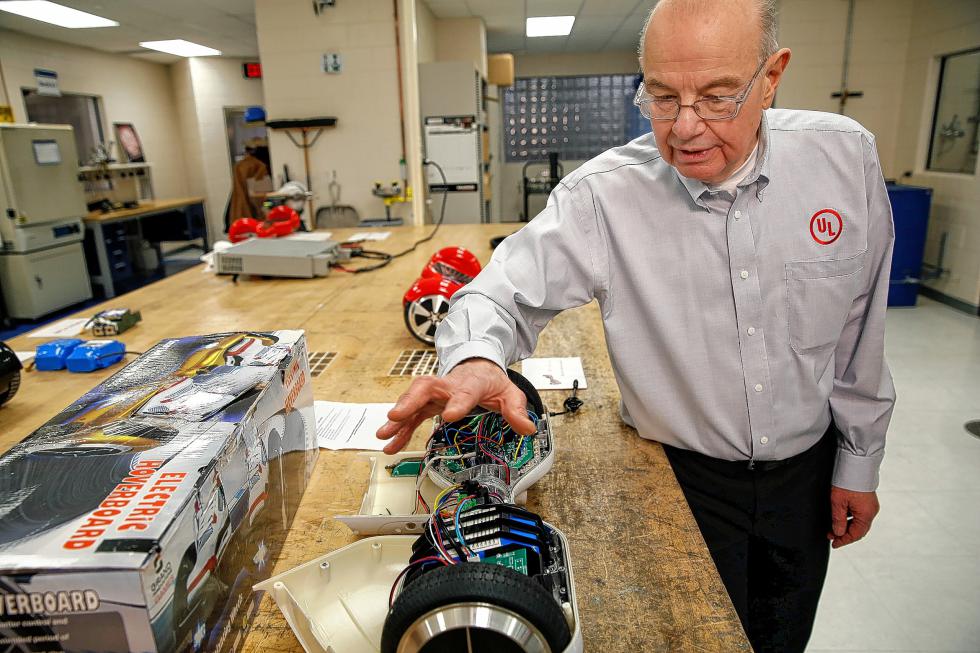 John Drengenberg, consumer safety director at Underwriters Laboratory, talks about what UL looks for when testing products, such as a hoverboard, at the UL test lab in Northbrook, Ill., on February 23, 2016. (Jose M. Osorio/Chicago Tribune/TNS)

Northbrook, Ill. — The sign on the reinforced door read “Projectile Testing” and the crowd gathered in the corridor outside had been warned to expect a small explosion.

But when the hoverboard battery blew up with an almighty BANG and a flash of yellow flame, Barbara Guthrie flinched all the same.

“Huh!,” UL’s chief public safety officer said with a nervous laugh as she adjusted her safety glasses. “Would you say that’s something you want in your home?”

It’s a question parents and other consumers have been asking themselves as reports of spontaneously combusting two-wheeled hoverboards have multiplied in the weeks since the self-balancing electric scooters became Christmas’ must-have toy.

Photos of hoverboards that were unintentionally incinerated in families’ homes while charging have proliferated on social media almost as fast as videos of celebrities like boxer Mike Tyson taking comedy pratfalls from them.

Now — with lawsuits proliferating, the devices yanked from the shelves of Toys R Us and other retailers and banned as a fire hazard by major airlines, some college campuses and rail lines — safety-certification company UL, based in suburban Chicago, says it is coming to the rescue. It’s developed a set of standards it says can reassure consumers that any UL-certified hoverboard is safe.

The government is urging manufacturers to seek certification. Last month, the Consumer Product Safety Commission warned that it could impound or recall uncertified hoverboards. There’s only one problem: The standards are so new that no hoverboard has yet passed them. And UL says confidentiality agreements mean it cannot reveal which manufacturers have applied for certification.

Founded in 1894, UL provides product safety testing and certification, with its approval mark appearing on 22 billion products worldwide each year. Its labs at a sprawling campus are a kind of torture chamber for products, the kind of place whose awesome destructive possibilities might appeal to little boys.

Products can be pummeled with weights, dunked in water, zapped with electricity and subjected to an almost unlimited number of other indignities, including being fired upon by an AK-47 assault rifle, before they are certified. One giant hangar-style building contains two life-sized houses, built purely to be torched.

If the tests that hoverboards will be subjected to aren’t quite as severe, they may nonetheless seem unfair to the layman. Hoverboards are dropped repeatedly from a 1-meter height, have their batteries punctured with nails, and are run for as long as seven hours with one of their wheels jammed to see if they catch fire. The explosion in the “Projectile Testing” room, for example, was caused by heating a lithium-ion cell from a hoverboard battery over a 1,000-degree Bunsen burner flame for several minutes.

But Guthrie said that even if users don’t abuse their hoverboards to such extremes, the test reveals flaws in the battery’s manufacturing. While shrapnel from the explosion ripped through a metal mesh screen designed to contain it, better made batteries don’t behave like that. “And that was just one cell,” she said. “The typical hoverboard has 20 or 24 cells, so you can imagine what damage they could do.”

“These lithium-ion batteries are not like your grandfather’s batteries, they’re very complex chemically — they’re not something you can just make in your garage,” she said. “If you think how kids treat these things, throwing them on the floor like a skateboard, banging up curbs or leaving them out in the rain, then you can see why these tests are necessary.”

While none of the technology in hoverboards is in itself, new, the combination of technologies is, said John Drengenberg, UL’s consumer safety director. UL recently accused Indiana-based hoverboard maker Swagway of using a UL certification mark on hoverboards that contain some UL-certified parts but which have not been certified as complete hoverboards.

“It’s how the whole system works together that matters,” said Drengenberg. “It shouldn’t be impossible to make a safe hoverboard, but so far there isn’t a single hoverboard that’s been certified.”

Hoverboards that UL recently bought at stores in the Chicago-area have counterfeit UL stamps, were shoddily made and filled with metal shavings that could cause a short circuit or lead the hoverboard to accelerate uncontrollably, Drengenberg added. Some had wires secured with only masking tape or weak soldering. And he noted that some of the Chinese-made hoverboards had badly written English on their packaging and instructions, including a recommendation that they not be “ixposed (sic) to rain.”

While poor English isn’t necessarily a sign of bad engineering, “It can be a red flag and consumers should trust their instincts — they’re probably a good guide,” he said. Certified hoverboards, if and when they’re available, will have a holographic UL mark, he said.

Even then, his wife probably wouldn’t let him ride one, said Drengenberg, who’s 73. “I’d need a helmet and knee and elbow pads and a pillow taped to my butt,” he said.