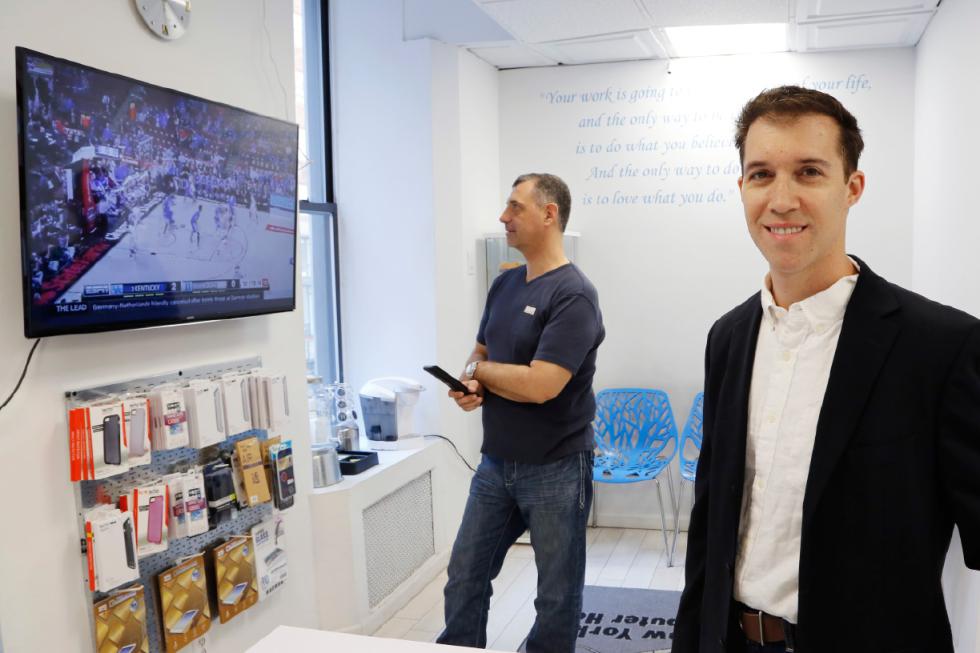 In this March 9, 2016, photo, Joe Silverman, right, poses in the lobby of his New York computer repair shop while employee Alex Lokshin watches the company's big-screen TV. Silverman realized last year he was losing productivity to the NCAA college basketball tournament, as the 20 staffers of his computer repair company kept checking their phones for scores during the games. His solution was to allow them to have the games on the big-screen TV he had installed for customers, but to let them know they do need to focus on their tasks at hand. Silverman keeps an eye on the games, too. (AP Photo/Mark Lennihan)

New York — March Madness is taking over at small companies that are letting employees watch the NCAA basketball tournament while they work.

Staffers at the marketing company Phelps will be able to keep an eye on the games at their desks or on conference room TVs. CEO Joe Phelps said his 86 employees are hard workers, often staying late or completing projects on weekends, so he’s fine if they work a little less hard during when games are on during office hours.

“If you hire the right people in the beginning who are motivated and productive, then we’re past the time of measuring and having everyone with their nose to the grindstone all the time,” said Phelps, whose company is based in Playa Vista, Calif.

March Madness can be a distraction at many companies, especially during daytime games. The games are streamed online, and many people continually check scores on their smartphones.

Productivity can slip, with an estimated $1.9 billion in wages paid to staffers who aren’t working because they’re preoccupied with games, according to Challenger, Gray & Christmas, a company that helps laid-off people find jobs. And if everyone’s watching a game at the same time, it can slow a company’s computer network.

But many small businesses have found it’s better to let staffers watch the games, and that output doesn’t really suffer. They find that a little slack makes for a better workplace. And because the decision will likely be made by the owner, and not layers of executives as in a big corporation, the boss can just say, go for it!

Craig Barbee turns the NCAA into a party for the five staffers of his Raleigh, N.C., bookkeeping company The Bookkeeper. The first day, there’s a barbecue with burgers and hot dogs, everyone brings in a side dish, and it’s OK to stop working for a while.

“We normally watch the first half of the initial game together, and we leave a large TV on in the conference room so people can saunter in and out throughout the day to check scores,” Barbee said.

Like other bosses, Barbee acknowledges that his staffers work hard and are responsible, and that he can trust them to get their work done.

But he also believes that because The Bookkeeper is located near schools that often make NCAA appearances — and Duke and three branches of the University of North Carolina are in this tourney — he can’t expect anyone to ignore the games.

Many workers are interested because they’re part of pools that bet on the games. The American Gaming Association, an industry group, estimates that 40 million people complete 70 million brackets, the printed or online forms fans fill in, predicting which teams will win at every level of the tournament. The more accurate fans’ predictions are, the more likely they’ll win money if they’re participating in a pool.

Owners who want to forbid employees to watch games even on their phones are going to have a hard time enforcing an outright ban, said Eric Cormier, a human resources specialist with Insperity, a Houston-based company that provides HR services.

Moreover, trying to clamp down on workers is likely to be a morale buster, Cormier said, suggesting bosses instead use the tournament or events like the Super Bowl and World Cup soccer games to build camaraderie and a positive atmosphere.

“Try to embrace it and create opportunities around it as a way to get people to be closer — people who wouldn’t normally mix together,” he said.

Some companies aim for middle ground to get work done and still allow workers to see the games. At SchooLinks, which operates a college application website, CEO Katie Fang will invite the seven staffers to watch the last quarter of televised games together.

“Our team will be able to focus on their work knowing they’ll get to watch the good part,” said Katie Fang, CEO of the Austin, Texas-based company.

She also plans to take everyone out to a bar to watch Friday afternoon games.

Joe Silverman realized last year he was losing productivity to the tournament as the 20 staffers of his computer repair company kept checking their phones for scores.

His solution was to allow them to have the games on the big-screen TV he had installed for customers — and to let them know they do need to focus on their tasks at hand.

“When there is work to perform, they know to listen to it in the background,” said Silverman, owner of New York Computer Help, located in Manhattan.

He’ll keep an eye on the games too.