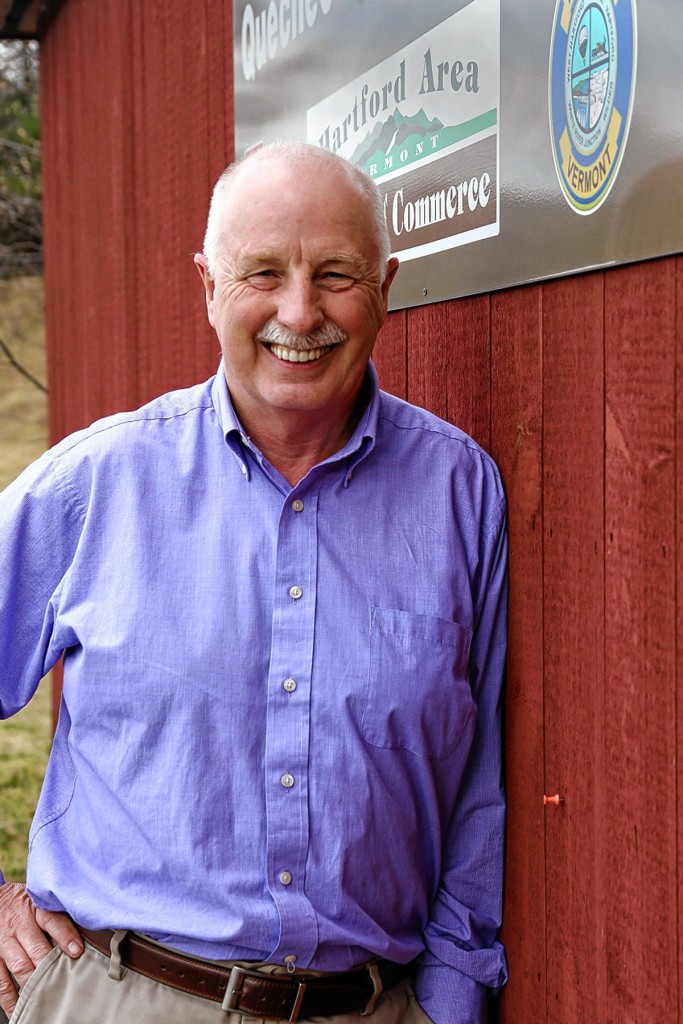 portrait of P.J Skehan of the Hartford Chamber 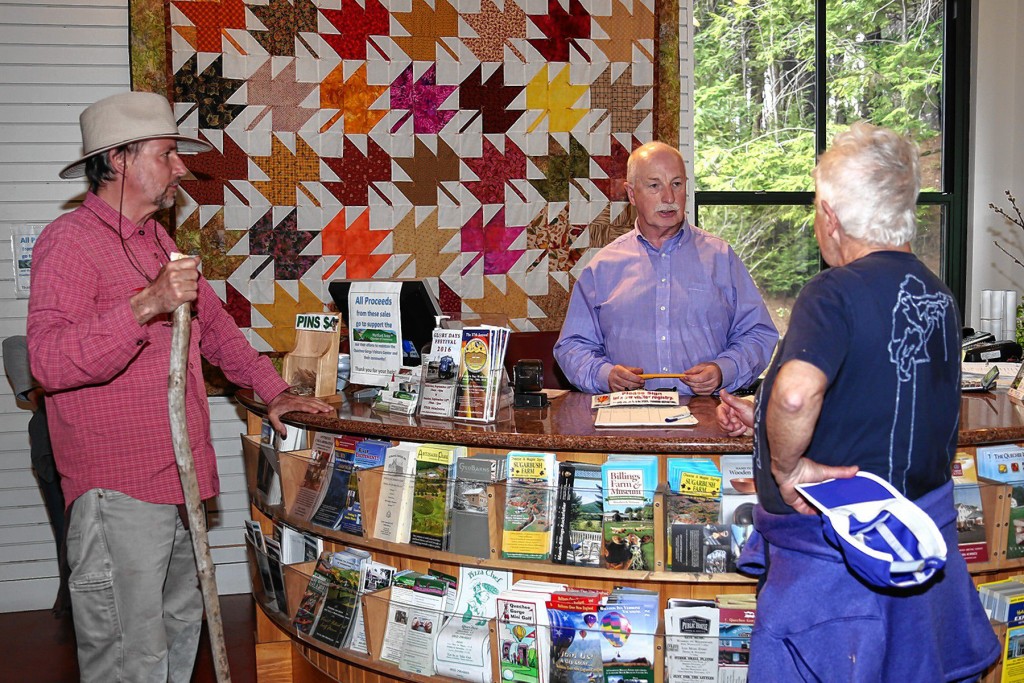 Day-trippers to Quechee be warned: If you venture inside the Visitors Center on Route 4 and P.J. Skehan happens to be attending the desk, there’s a good chance he’ll persuade you to spend the night in the area.

At 61, Skehan, executive director of the Hartford Area Chamber of Commerce, is a tornado of vivacious enthusiasm, and the subject he is most passionate about is Vermont. The sprightly P.J. — Patrick Joseph — came to Vermont from his native Ireland as a glassblower with Simon Pearce back in 1981, and rose through the ranks to become general manager before leaving in 2004. It’s not inconsequential that Simon Pearce became a global brand during Skehan’s tenure.

During a recent conversation, Skehan talked a mile a minute, jumping from one subject to another as if jumping across stones in a brook. He’s the quintessential ad man, except every word spoken in his lilting Irish brogue comes across as completely sincere.

“One of my aims for our chamber is getting more involved in economic development,” Skehan began. “The business part can be difficult because Vermont doesn’t have a great reputation for being business-friendly, and it’s always very competitive with New Hampshire because we don’t have all the incentives that New Hampshire has, but we make up for it with the quality of life. And at the chamber, we get creative. We’re looking at creative ways to grow businesses.”

Skehan, who took over as executive director in 2013, cited using social media more effectively and working with other chambers to add value for his members. Membership fell off in recent years because the health insurance offered through the chamber was replaced with Obamacare. Still, Skehan said, the chamber turned a profit last year, and he confirmed the organization is in good financial shape.

Aside from dues, the chamber’s biggest moneymaker is the annual balloon festival, but bad weather has taken its toll on attendance and profits in the past few years. While hoping they have “the luck of the Irish” on their side with future weather conditions, Skehan is looking for ways to develop the festival beyond balloon flights.

The festival, scheduled for June 17-19, also will feature local artisans such as potters and glassblowers, and Skehan is working on getting more vendors to take part. The goal is to have five balloon ascensions, but if the weather doesn’t cooperate, Skehan wants to ensure that families have plenty of other activities to keep them busy.

Looking beyond the festival, the Chamber is developing new events, such as the murder mystery train, which was included in Hartford’s Glory Days Festival last year. It sold out and turned a tidy profit, and plans are underway for a repeat next September.

The words collaborate and partnership were sprinkled liberally throughout Skehan’s comments, particularly when talking about the chamber’s monthly after-hours mixers, which he often plans in conjunction with other area chambers, including Lebanon, Hanover and Woodstock.

“Mixers have always been around, right? Skehan explained. “There are a lot of business groups out there and in a small area like we’re in, the more collaboration, the better. It’s beneficial to all the members because there’s a bigger melting pot.”

Skehan said his members are facing a labor shortage, due in part to the flight of young people from Vermont, and a lack of affordable housing. While crediting the Vermont Chamber of Commerce and legislators for their efforts, Skehan also is looking for local solutions, and he sees education as a key factor.

The Community College of Vermont recently hosted a breakfast mixer for chamber members, and Skehan said attendees were surprised at how much CCV offers — both in terms of producing an educated workforce, and offering affordable continuing education for employees.

Skehan also is bullish on the Hartford Area Career and Technology Center.

“Everyone is complaining they can’t find good people, and everyone thinks they have to go to college,” Skehan said. “There’s all this potential there with electricians, carpenters, hairdressers, chefs and IT people, and there’s a big demand in the trades now. Vocational training had a stigma for years, but (the Hartford Area Career and Technology Center) does tremendous work and it’s underutilized.”

The most serious issue currently facing the chamber is that of people taking their lives by jumping off the Quechee Gorge bridge, which is just steps away from the visitors center. Recently, a bill to identify suicide prevention measures was passed in the Vermont House and sent to the Senate. Under the bill, the Agency of Transportation would conduct a review and report its findings by the first of the year.

“It’s a sensitive and difficult subject,” Skehan said. “Initially word was out that the businesses around here are more concerned about how the bridge looks. It’s a historic bridge, and some of the business folks were upset that the Legislature didn’t involve them (in the process). We have a beautiful bridge that over a quarter-million people visit per year, and we want it to be known for its beauty, not because people commit suicide off of it.”

“It’s tragic for everyone involved, and I can’t imagine the pain of the families. It’s traumatic for the first responders and for us. We care about it and want to be part of the solution,” he said.

The Hartford Area Chamber of Commerce has roughly 220 members, including about 40 nonprofit organizations. Eighty percent of the members are small businesses, and Skehan’s enthusiasm went into overdrive discussing them.

Not diminishing the role of larger organizations, such as Northern Stage, Skehan credits small-business owners with the revitalization of White River Junction, which he says has been a boon to the chamber.

“A lot has come from the town (of White River Junction), but it’s been driven by people like Matt Bucy, who owns Tip Top; David Briggs, who owns the Hotel Coolidge; and Kim Souza, who owns Revolution. Kim’s been heavily involved and her store typifies what White River has become. It’s eclectic. It’s funky. Suddenly it’s hip to be in White River,” he said.

Skehan said most member business are small one- or two-people operations, and he gets energized thinking of how to help them get to the next level. A large part of his job is promotion and marketing, and he acknowledges that the visitors center is an asset. More than 100,000 people flow through its doors every year, and Skehan said they are a captive audience.

“Many of them stop in to use the restroom, but they can easily be channeled into visiting an attraction like Billings Farm, the Vermont Institute of Natural Science or the Montshire (Museum),” Skehan said with delight. “And I don’t have a problem sending them over the river. In a small area like this, the more collaboration we do, the better. I’m here to sell the whole area.”

As he spoke, two visitors from Connecticut popped in for some information, and Skehan talked them into trying out a few trails behind the visitors center.

There’s a good chance they wound up spending the night.