The Business of Agriculture: ‘The Milk Problem’

Home » Features » The Business of Agriculture: ‘The Milk Problem’ 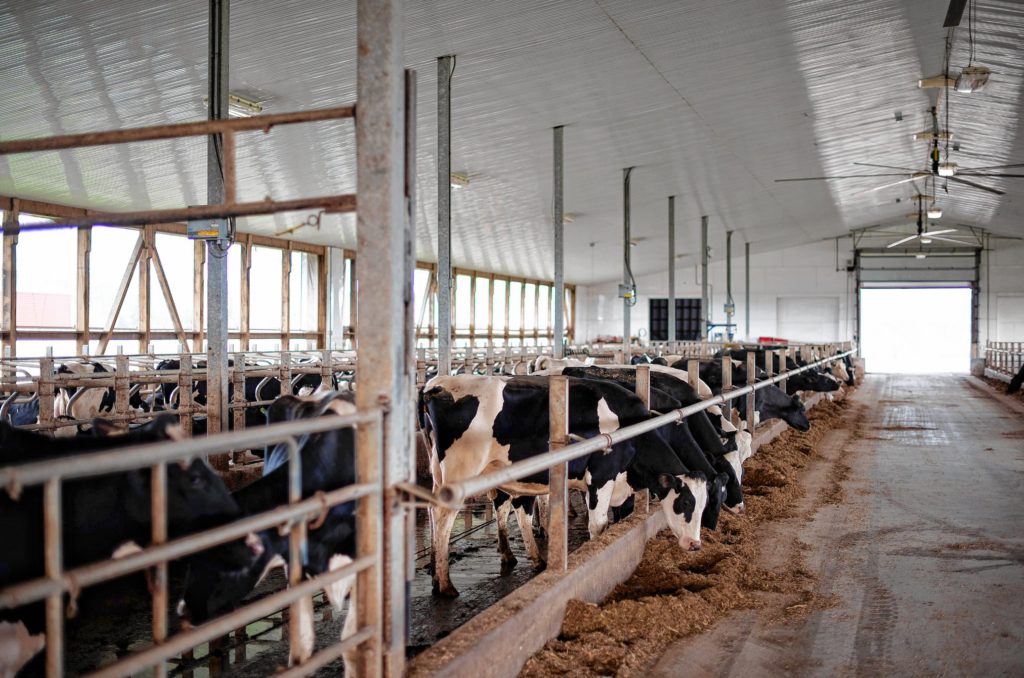 It’s been said for generations: If U.S. dairy farmers — each and every one — would cut their production by 5 percent they’d all come out way ahead, with money to cover the forgone sales and lots more cash from sharply higher prices for the rest of their production.

Sounds simple, but fat chance it could ever happen.

The nation’s milk-producing infrastructure is a juggernaut, an undisciplined juggernaut that’s locked into a chronic pattern of wildly swinging prices where the troughs of depressed returns have been growing longer and longer in the past few years and historic reliance on government support has become virtually extinct.

The headlines in recent months in Vermont, New England and nationwide have been telling the same story. It’s become easier and easier to make more milk, but harder and harder to get a decent price for the stuff in the marketplace. Modern science and technology, dramatic gains in the genetic ability of cows to produce, and the economies of scale from farm expansion and consolidation have U.S. dairy farms rolling out more milk every year, even as the overall number of farms continually shrinks.

Milk is what economists call an inelastic commodity. If the price of a gallon of milk is cut in half the consumer won’t automatically buy an additional gallon — you can only drink so much. That means a slight surplus of raw product translates almost immediately into significant downward pressure on its price. The way the U.S. milk marketing system is organized there are a lot of factors that affect the eventual price the farmer gets. But in truth, more milk than the market wants means bad news for the farmer.

The economic imperatives facing the individual producer — be it a classic family hillside farm in the Upper Valley or a mega-dairy with thousands of cows in the dry country of Idaho — are exactly opposite those of a collective solution to the overall industry’s price woes.

This disconnect between market needs and on-farm goals has been a fixture of U.S. dairy farming for generations.

World War I brought a short period of prosperity to American agriculture as it was called upon to feed European countries laid waste by war. Grains, meat, dairy and virtually all components of the nation’s agriculture enjoyed high prices and strong demand. But the boom would abruptly end in the early 1920s and “The Farm Problem” became a continuing piece of political discourse in Washington.

The Great Depression and coming of the New Deal under President Franklin Delano Roosevelt brought a host of new approaches to try to solve the problems down on the farm, and dairy was one area that got serious attention, leading to ambitious legislation in 1937 that sought to stabilize pricing and markets for dairy producers.

Up to that point it was a Wild West-style system that harmed both producers and consumers.

In the spring months cows would produce more milk, thanks to lush, new, green grass, at the same time as consumers were easing up on beverage milk and drinking more lemonade and soft drinks. Dairy plants would cut the prices they were offering for farm milk, or would simply tell farmers to dump their production down the drain.

Come fall, the situation would reverse. Dairy plants would seek more milk to meet rising consumer demand and offer better prices to farmers — just as the cows were coming back into the barns and getting lower-quality nutrition, causing their output to slow.

The system worked fairly well for close to 40 years, before it started to fall apart.

An Accumulation of Inventories

Rapid growth in production per cow and per farm due to advances in bovine genetics and the science of feeding lactating animals was coming up against a slow but steady decline in per capita consumption of fluid milk by the American public. Incentives in the federal tax code were being added that were attracting unneeded investment in dairy (as well as in orchards, wineries and other agricultural businesses) by nonfarm investors.

By 1980, the federal government’s open-ended offer to buy surplus milk at a guaranteed floor price was leading to accumulation of inventories of butter and cheese even after giveaways to school lunch and eldercare programs and hunger relief in foreign lands.

Reports of surplus butter and cheese rotting in caves were becoming a fixture on evening TV news shows, and government-waste watchdogs were having a field day showing how the federal dairy program was bleeding taxpayers.

Congress would respond with two initiatives to try to plug the drain on the treasury and stop the accumulation of burdensome surplus dairy products in storage coolers.

The first was a payment program under which dairy producers were offered a check if they’d cut back on their production. It was like an auction process, and those willing to cut for the lowest amount of money were accepted. This reined in overall production somewhat, but output would roar back as soon as the period of time for cutting volume expired.

So, in 1985, Congress made a new offer: How much money will it take for you to send you cows to slaughter and stop producing milk altogether for five years? This came to be called the “whole herd buyout program,” and it would put an abrupt end to about 20 percent of the dairy farms in New Hampshire and Vermont as operators took the opportunity to grab some federal money and get out of the business.

This restrained production for a few years, but by the early 1990s the same old surplus and price problems for farmers were back. This time Congress — Republicans and Democrats alike — threw up its hands and said just let price discipline the milk producing business with only a minimal safety net for the farmers.

The government would continue to set a minimum farm milk price through a complicated formula based largely on trading of cheese on the Chicago Mercantile Exchange. So, with plenty of cheese on offer, prices are soft, and that softness passes straight through to farm milk checks.

It’s often been said that the pricing of farm milk in the United States is rather like the international gold market: Only about 150 people understand it, and that’s exactly the way they want it.

So here we are in the spring of 2017, and the prices that a majority of U.S. dairy farms are receiving for their milk don’t cover their cost of production. A “margin insurance” program pitched to them by Washington to help them through times of depressed milk prices has failed to pay out much of anything, even though the government took in tens of millions in premium payments.

There’s surplus milk all over the country. Right here in the Northeast, the springtime surplus for the last two years has been such that millions of pounds of milk simply have no home and end up being dumped into manure storage pits. In upstate New York, farmers have been getting shut off by their buyers, and now it’s happening in Wisconsin, where in the past few weeks farmers have been receiving termination letters and are unable to find alternatives.

Midwest milk is backing up because Canadian markets for U.S. milk components, such as milk protein concentrate, have closed.

There is fear the Mexican demand for U.S. dairy products may shrink as the Mexican government starts to look elsewhere for supplies of agricultural commodities in response to the hostile attitude of the Trump administration in Washington.

Steve Taylor lives and farms in Meriden. He serves as a director of the Cornish Fair Association and of Eastern States Exposition.