Beyond the Farm: Supporting Vermont’s Food System Involves a Lot More Than Agriculture 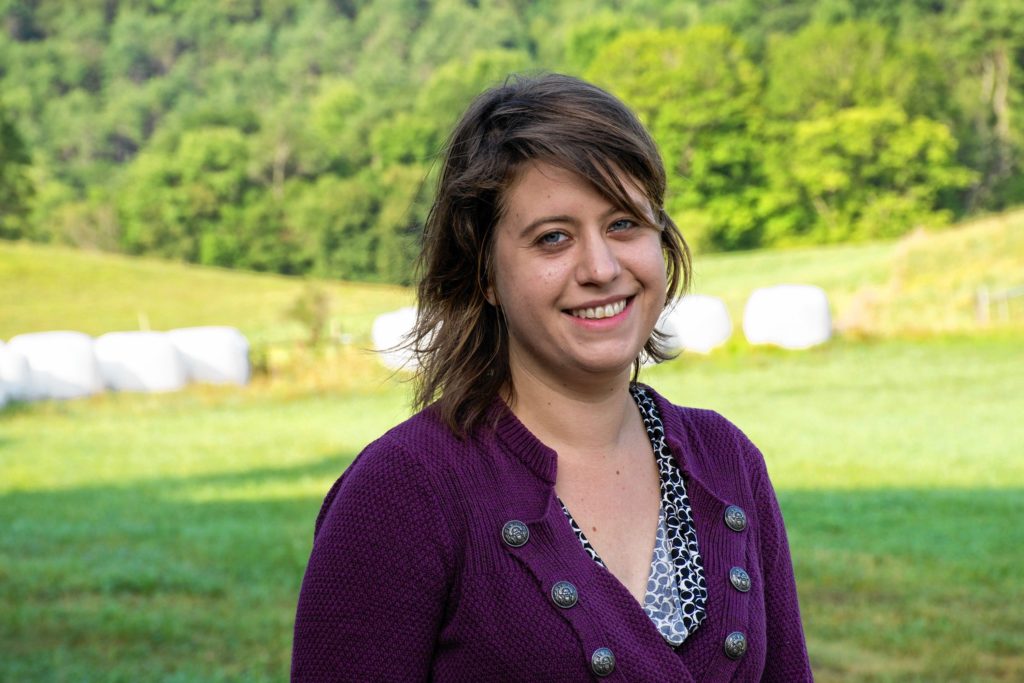 Sarah Danly, of Royalton, was hired in April as the network manager for Vermont's Farm to Plate food system plan. Danly grew up in Washington, D.C., and gradated from Vermont Law School in 2015 with a master's degree in land use law. She combined her personal interest in whole food with her degree and moved to back Vermont from Boston. (Nancy Nutile-McMenemy photograph) 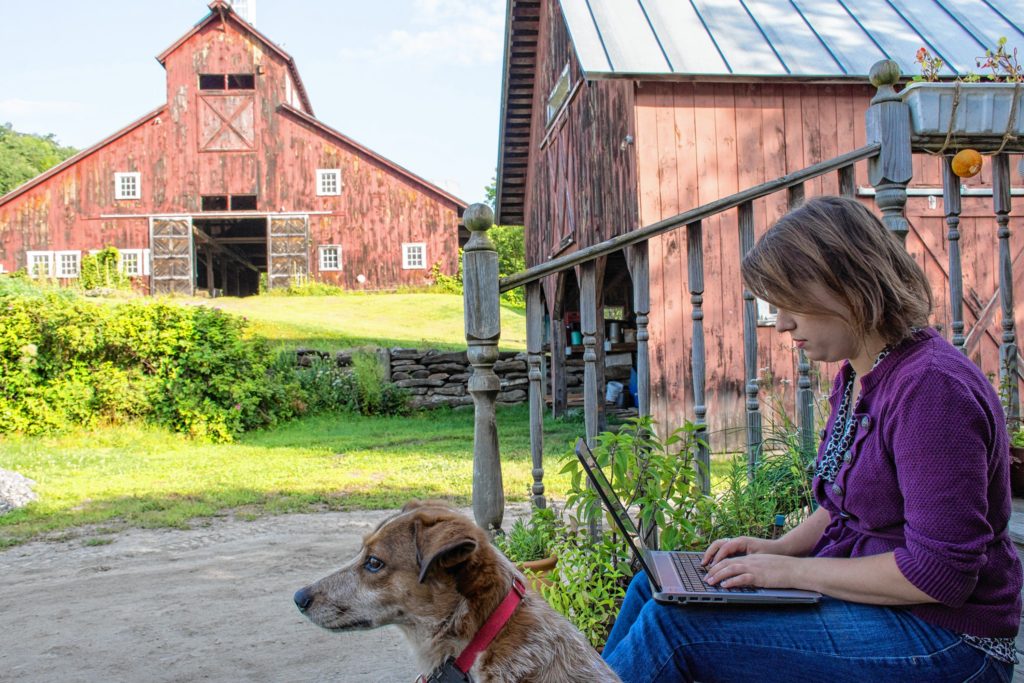 Sarah Danly, network manager for Vermont's Farm to Plate food system plan, works from her "home office" -- the steps of her rented house on a farm in Royalton, Vt.., as her officemate, Else the dog, keeps watch. (Nancy Nutile-McMenemy photograph) 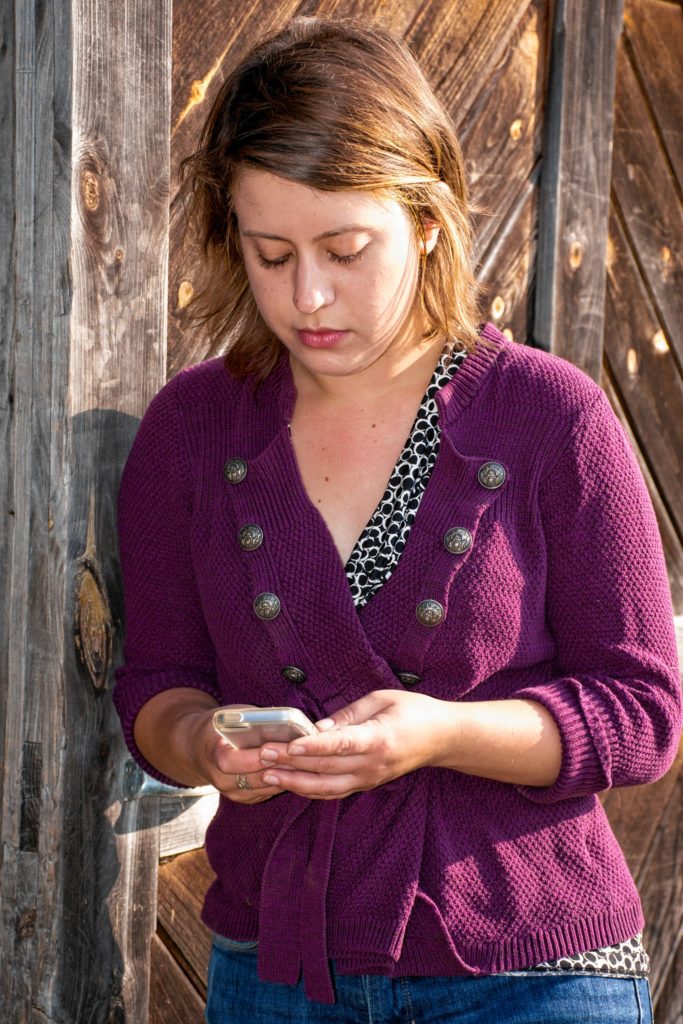 After taking care of the sheep, Sarah Danly, network manager for Vermont's Farm to Plate food system plan, checks her phone before driving to her office in Montpelier, Vt. (Nancy Nutile-McMenemy photograph)

When most people hear about Vermont’s Farm to Plate Network, they assume that it is focused on supporting farms and restaurants. However, Sarah Danly, who was named network manager of Farm to Plate food system plan in April, wants people to know that the network is much larger.

“It goes way beyond that,” she said. “The Farm to Plate Network is looking at the food system comprehensively.”

Danly, who lives in Royalton, is a 2015 graduate of Vermont Law School, where she earned a master’s degree in environmental law and policy. Although she initially focused on studying land use, she became increasingly interested in agriculture and food systems both on a personal and professional level. Working in the sector, she was fascinated by the Farm to Plate Network’s community-based approach to a major economic initiative.

“I really liked that projects were so on the ground,” said Danly, 27. “This is not a top down theoretical approach, but small on the ground projects that communities knew that they needed.”

Together, those small projects are having a big impact. The Farm to Plate Network is a public policy initiative created by the Vermont Legislature in 2009, designed to support the economic growth of the food system and to help all Vermonters access healthy local foods. The network brings together more than 300 organizations around the state in order to work toward 25 goals ranging from increasing local food consumption to promoting livable wages or increasing access to capital for businesses within the food sector. The collaboration is overseen by the Vermont Sustainable Jobs Fund, a nonprofit organization based in Montpelier.

The breadth of the project is hard to comprehend. In a rural, agrarian state like Vermont the food system touches nearly every corner of the economy, from tourism to the trades. Working with such a wide array of sectors is what makes the Farm to Plate Network so unique, Danly says.

“One of the most powerful impacts the network has is (facilitating) the industries and groups coming together that might not otherwise,” she said. Recently she oversaw a meeting between an organization focused on food access and one focused on food disposal. They were discussing how to leverage their missions in order to advance both.

“Different types of stakeholders come together through the network and therefore have a greater effect on how the Vermont economy works,” Danly said.

The results show that the initiative is succeeding. According to the Farm to Plate 2016 annual report, 6,000 jobs and 779 new businesses have been created in the state’s food system since 2009. The gross sales in the food system have increased to $10 billion, up from $7.6 billion 10 years ago, and the net value of food manufacturing in the state has increased to nearly $1 billion, up from $632 million in 2004. At the same time, food insecurity in the state has decreased.

The numbers are promising, but the last decade has also seen the birth of the locavore movement, which has made eating locally grown foods into a trendy lifestyle choice. Despite that boom, Danly said, the system is sustainable, even if the locavore movement doesn’t continue to grow at the same rate.

“There is room for growth in all the other pieces of the food system as well,” she said. “I’m not concerned about the bubble around the locavore movement because if you look beyond the farms there are an array of jobs.”

One of Danly’s first projects has focused on increasing awareness of those jobs. She is overseeing The Career Image and Pathways Task Force, which aims to educate local high school students about careers in the food system by having them profile people in those jobs. While most jump to careers like farming and restaurants, Danly has been working to include less obvious jobs that are essential to the food system, such as veterinarians, policy makers and HVAC technicians.

“We want high school students to think about the food system and all the jobs involved in that beyond farms and food enterprise,” she said. The infrastructure needed to get food from the field to consumers is a major part of the economic impact of the food system.

“It’s been really interesting to me to see how important that piece is to having a functioning food system,” Danly said. Through initiatives like the career images project, organizations within the Farm to Plate Network are aiming raise awareness of jobs within the food sector. They are working to increase the jobs available and to ensure more workers have the skills necessary to fill those jobs. Part of that includes changing the perception of jobs within the food sector, which are often seen as low paying or inconsistent.

“There are increasing number of jobs and there are great jobs,” Danly said.

For all projects the Farm to Plate Network uses results-based accountability, so organizations must document how much they will do, how well they will do it, and whether anyone be better off because of the initiative. That allows the network to build on its progress and continue working toward the 25 goals that it aims to accomplish in order to help Vermont’s entire food economy thrive.

“The point of having it be a network is that the pieces are so interconnected,” Danly said. By getting them all aligned the food economy will continue to grow.

Kelly Burch, of Claremont, is a freelance journalist and editor. Her work has appeared in THE WASHINGTON POST, the CHICAGO TRIBUNE, BOSTON MAGAZINE, COSMOPOLITAN and elsewhere. Follow her on Twitter @writingburch.