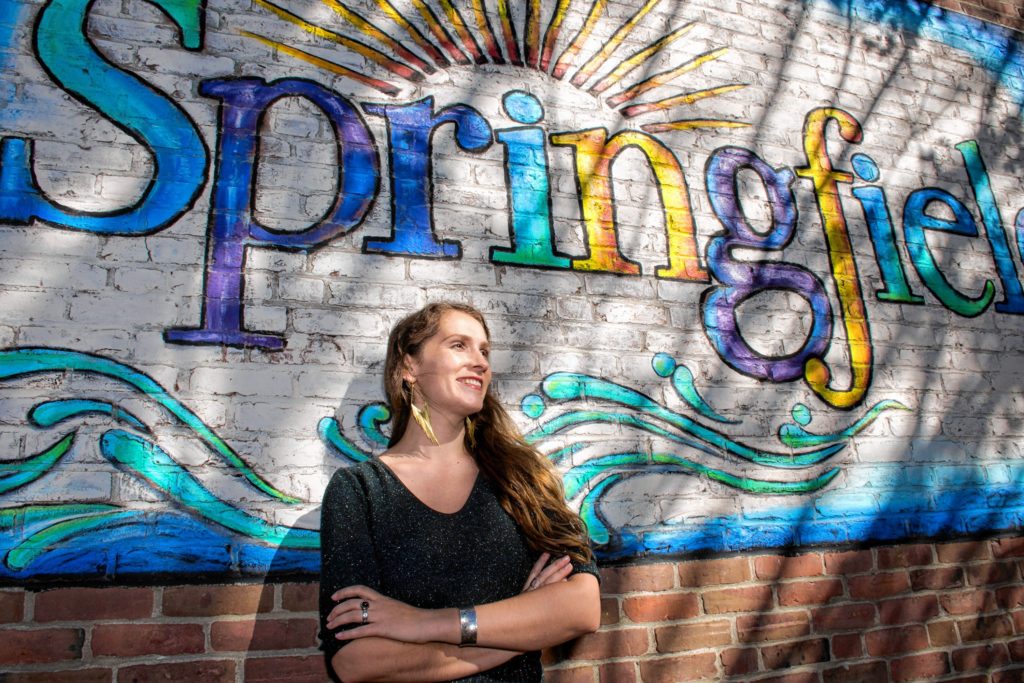 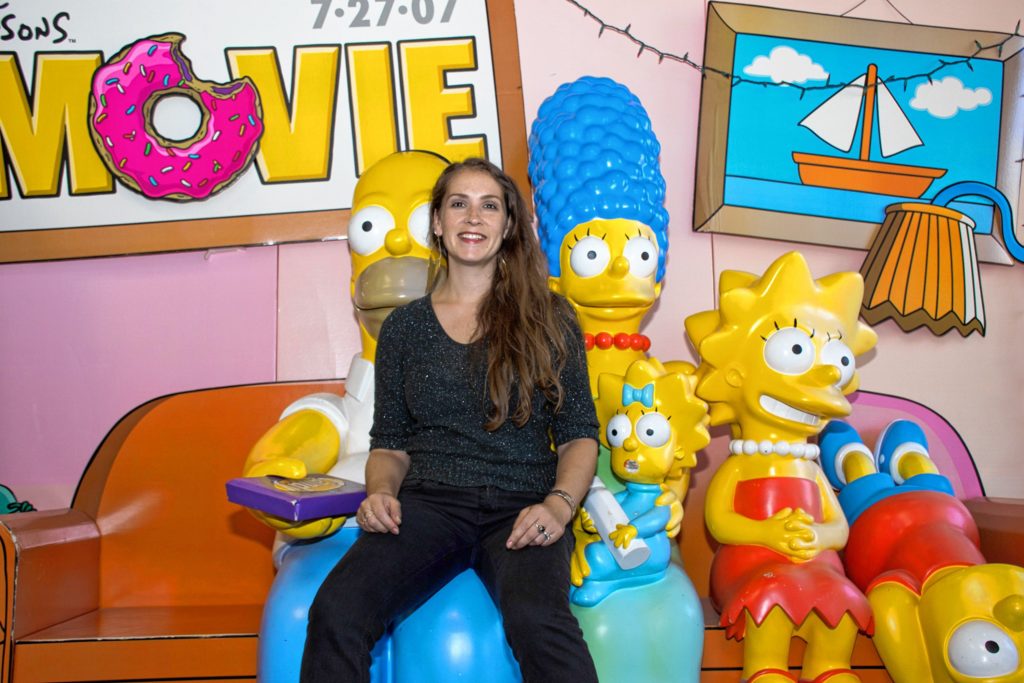 Back in 2007, Springfield Vermont beat out 13 other Springfields around the United States in online voting to host the premiere of the Simpsons movie. Some of the event props are in Caitlin Christiana's office. Nancy Nutile-McMenemy photograph. 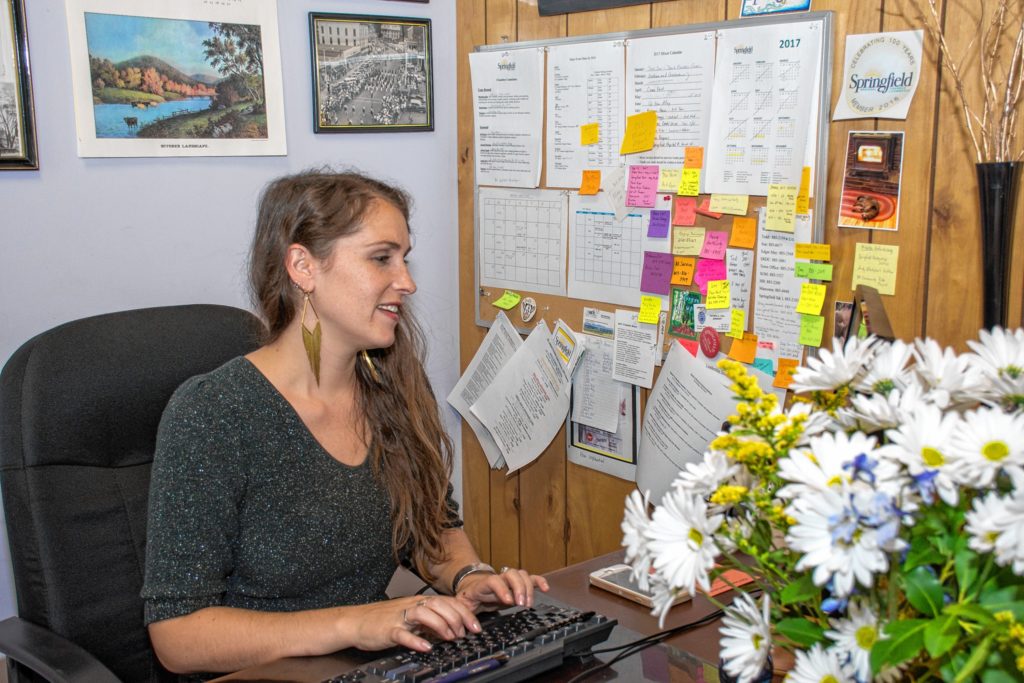 In her second year as executive director of the Springfield Regional Chamber of Commerce, Caitlin Christiana works on her computer preparing for the town's annual Apple Festival. Nancy Nutile-McMenemy photograph.

Growing up in rural Florence, Vt., Caitlin Christiana couldn’t wait to get out and see the world. In 2001, she moved to Utica, N.Y., as a sculpture major at Pratt Institute, where she became interested in jewelry making. After two years, she transferred to the Brooklyn campus, but the city offered more excitement than she bargained for.

“I was robbed at gunpoint on my third day, which was very traumatizing,” said Christiana, executive director of the Springfield Regional Chamber of Commerce.

She finished her studies, but when she was offered an apprenticeship with master goldsmith Deirdre Donnelly in Quechee in 2007, she jumped at the chance to return to the Green Mountain State.

“I was really unhappy, and it was a good opportunity to get back to Vermont and pursue my interests. My boyfriend, now fiancé, Sam, was living in Vermont, so things started drawing me back, but it was the last place I expected to end up,” said Christiana, 34.

The couple moved to Springfield in 2009 because it was central to both their jobs, and offered affordable housing. As the economy tanked, Christiana had been managing Deirdre Donnelly’s gallery — and has her own small jewelry shop, hozzlebozzle, on Etsy — but wanted a reliable job, so took a position as a bank teller in town. Looking back, she said, it was not her dream job, but it was stable and convenient, and made a lot of sense at the time.

“It was through that job at the bank that I started to get to know people who are on the board of directors at the (Springfield Regional Chamber of Commerce). That’s how I met them, how they got to know me, and how they eventually asked me to come in for an interview,” Christiana said.

Her initial reaction was that they were crazy to consider a fine arts major who had no knowledge or experience in running a nonprofit. But the board persisted. Eventually they persuaded her to go in for a conversation, and that’s when she began to give the idea serious consideration.

“Caitlin had run a gallery, and had all the business experience, plus she had run her own small jewelry business on the side,” said Ethan McNaughton, president of the chamber from 2015-2016, who actively recruited Christiana. “We wanted to be sure we were connecting with small businesses and wanted someone who understood the struggles they face; we felt she was really in tune with that. Also, the chamber is a small business, and she has to run the finances while helping all these businesses, so her experiences set her up for the job.”

When Christiana took over as executive director in September of 2015, she thought she might receive hands-on training, but instead she had to dive in and largely figure things out for herself.

“We didn’t have the ability to do a lot of supervision and we needed someone self-motivated who could take the job and make it their own,” McNaughton said.

Adding to the challenge is that she started her new position two weeks before the Vermont Apple Festival, the chamber’s largest fundraising event of the year.

“The previous director, Jenevieve Johnson, had given notice in July so there had been a period with no one in place,” Christiana said. “She was doing her best to fill in the gap but she was running a business at the time. I had guidance from the board, but they were all busy and had their jobs, so I was here full time, doing what I could to figure out what needed to happen and how to make it work.”

On the heels of the Apple Festival, in March 2016, Christiana had the responsibility of hosting the chamber’s centennial gala. She was daunted by the task, but realized that her fine arts background was an asset.

“It was such an honor and I wanted it to be special and I wanted it to be fun for everybody. I was able to bring my background into that experience, which helped me to bridge the gap of me feeling like I was not sure how to do the job, versus recognizing that I had a lot of strengths I brought to the table. I just had to figure out how it all fit together,” she said.

The past two years have been spent learning the ropes and refining processes, and as she begins her third year on the job, Christiana is focused on streamlining successful programs, and looking at eliminating initiatives that are no longer relevant to make way for new possibilities. She’s proud of the fact that the chamber, which has about 175 members, is in a strong financial position — its 2015 IRS Form 990, the most recent available, shows the chamber with revenues of about $54,000 against expenses of about $48,000. Christiana credits this to her simple approach of raising more money and spending less. Still, she’s working to diversify revenue streams.

“I recognize that having revenue tied directly to dues can be volatile and hazardous. As much as we rely on dues, we also have events and fundraisers, so we can continue to serve our members,” Christiana said.

She works closely with the chamber’s board of directors, unique in that it is comprised largely of millennials. The 15-member board is about half men, half women, and the majority are in their late 20s or early 30s

“We have more experienced board members to balance things out by sharing their institutional knowledge and expertise,” Christiana said. “I’m grateful to have a supportive and forward-thinking group of individuals to work with. It’s exciting to have so many young people involved with the chamber, and as a result, we have seen a significant increase in younger professionals attending our mixers and events, and engaging in meaningful ways.”

Aside from leading the chamber, Christiana works collaboratively with area organizations, and is on the steering committee of the Downtown Streetscape Committee, which is planning 20 projects to revitalize the downtown corridor.

“We’re really starting to turn the corner and there’s a lot of electricity in the air,” Christiana said. “When I ask what members want, they want to see downtown storefronts filled with businesses and they want to have a thriving community. The best way I can provide that is by being at the table for those conversations.”

The chamber also acts as the administrative and fiscal agent for the Leadership Southeast Vermont Program, which serves Windsor and Windham counties. The interactive program trains students in the complexities of government and community service.

Additionally, Christiana is a member of the Cornerstone Creative Community of Vermont, part of the statewide Vermont Creative Network. “The group is working to strengthen the creative sectors in Vermont to support job growth and healthy, vibrant communities,” she said.

When not working, Christiana can be found making jewelry in her home goldsmith studio, or taking in the scenery on motorcycle rides. As for her future with the chamber, she said it will be interesting to see what happens now that she has some experience under her belt.

“There are many things that I enjoy about it, and I think there is a lot of opportunity for growth and for continuing to be a key player in the revitalization of Springfield,” Christiana said. “I would hate to miss out on that process now that we are getting somewhere.”