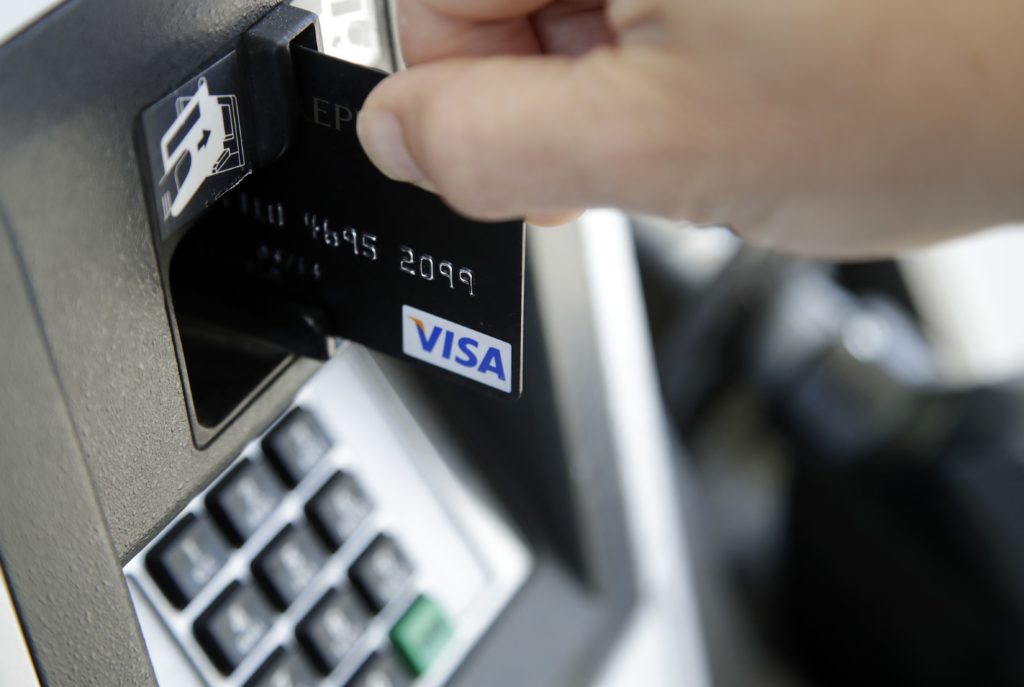 FILE - In this June 15, 2017, file photo, a customer inserts a credit card to buy gas in Haverhill, Mass. It’s always good to pay off your credit card debt, but now may be a better time than ever to do so. Americans’ debt levels have been creeping back up recently and interest rates are expected to rise soon. That’s a combination that could put consumers in a bind if they’re carrying a balance on their cards. (AP Photo/Elise Amendola, File)

Americans’ debt levels have been growing and interest rates are rising — a combination that could put consumers in a bind if they carry a balance on their cards.

“Everyone has this sense that there is a storm brewing,” said Bruce McClary, spokesman for the National Foundation for Credit Counseling. “All indications that we’ve seen are that people are carrying higher balances from month-to-month and more are behind on their monthly payments. That’s not a healthy mix.”

So what can you do?

“To know where you are going, you need to know where you have been,” McClary said. That means taking a hard look at your financial picture. Take stock of your debts, along with associated interest rates and minimum payments. Track your spending to get a sense of where your money goes each month.

Ask your credit card companies if they will lower your rates. The average annual percentage rate on a credit card is around 16 percent. That’s pretty steep, so you may want to consider moving your balance to a card with a lower or zero-interest introductory rate to help pay it off faster. A word of warning: You’ll probably have to pay a balance transfer fee and pay the balance off before that promotion window ends or you could face accumulated interest.

There are two common debt repayment strategies — avalanche and snowball.

The avalanche works by putting all your extra money toward your highest interest rate debt. Once that’s paid off, you start paying off the next most expensive debt until it’s all gone. While the avalanche makes the most sense financially, sometimes the snowball method provides more motivation. With this strategy, you pay off the smallest debt first, to boost your spirits. Then you use that momentum to pay off the next biggest bill and so on, building your efforts like a snowball.

It doesn’t really matter which one you use, just that you do it, said Lauren Zangardi Haynes, a financial adviser.

This is the hard part. You may backslide or hit some road bumps but don’t let that sap your motivation, McClary said. If possible, set aside a small cushion of cash to help with unexpected expenses that you might be tempted to put on a card.

“It’s not going to be easy but it’s worth doing,” Zangardi Haynes said.