Home » Uncategorized » As Joblessness Falls, Skilled Workers Might Be Harder to Find 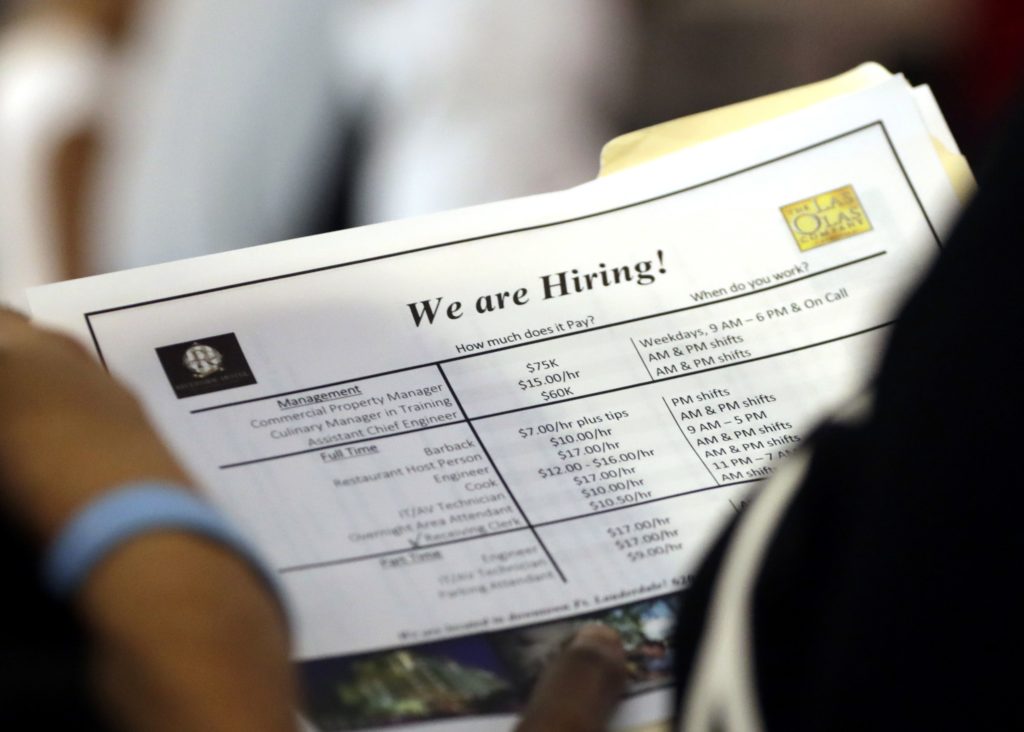 FILE In this June 21, 2018 file photo, a job applicant looks at job listings for the Riverside Hotel at a job fair hosted by Job News South Florida, in Sunrise, Fla. The U.S. unemployment rate fell to 3.7 percent in September 2018 the lowest level since December 1969 — signaling how the longest streak of hiring on record has put millions of Americans back to work. Employers added just 134,000 jobs last month, the fewest in a year, the Labor Department said Friday, Oct. 5. But that figure was likely depressed by the impact of Hurricane Florence. (AP Photo/Lynne Sladky)

Are America’s employers at risk of running out of skilled people to hire?

The U.S. economy has become a seemingly perpetual job-generating machine, having steadily added workers for nearly eight years. Even with the unemployment rate now at 3.7 percent — its lowest point since 1969 — hiring hasn’t stalled. So far this year, job agrowth has averaged a robust 208,000 a month, up from a pace of 182,000 for all of 2017.

The trend has defied the predictions of most economists. Many have long warned that as hiring surged and unemployment fell, the pool of potential hires would shrink and trigger a bidding war that would ignite wage gains.

It hasn’t happened. Many people still are being hired each month. And pay raises, though rising, remain modest.

To try to explain why employers still are managing to hire skilled workers at a steady pace, Gimbel paraphrased a line from the 1971 movie Willy Wonka & the Chocolate Factory:

“There’s no knowing where we’re going, but it shows no sign of slowing.”

In July, America’s employers posted a record 6.9 million job openings, which actually exceeded the number of unemployed people. The abundance of openings suggests that companies expect to keep hiring.

Even the Trump administration, for all its brash public confidence, acknowledges uncertainty about how much further unemployment can fall.

At some point, many employers likely will feel they’re running out of skilled workers to hire. Just not yet. Here will be five signals that a labor shortage may finally be at hand:

Average hourly wages have risen 2.8 percent in the past 12 months. That’s basically keeping pace with the inflation rate for consumer prices.

But the theory is that as economy keeps expanding and employers find they need to pay more to attract employees, pay could jump, especially in some sectors of the economy that require heavily skilled workers.

Some companies already are taking action. Consider Amazon’s recently announced boost in its minimum hourly wage to $15 starting in November. Amazon’s rival retailers and warehouse operators, in particular, may feel pressure to raise pay, too.

For now, many employers appear to be raising pay only modestly while in some cases also offering short-term bonuses not included in the government’s gauge of hourly earnings.

American Textile, a 93-year-old manufacturer of pillows, sheets and comforters based in Pittsburgh, has found it a challenge in recent months to add and keep workers for its 800-person staff. It’s been raising pay by 3 percent to 4 percent annually for years. But it’s now introducing the perk of paying bonuses as soon as three months after a worker joins the company.

“Just show up — you’ll get something extra,” said Pete Marsalis, the company’s director of human resources.

One of the best measures of available workers is what’s called the participation rate. That’s the proportion of working-age adults who either have a job or are actively looking for one.

The rate increased in 2016 and 2017, but it’s fluctuated this year. Because the rate remains below its peak, it suggests that a pool of people exists who could potentially start looking for work or return to school to obtain specialized skills or training for a job.

To return to the peak participation rate would require roughly an additional 4 million people to start looking for a job and potentially find one.

But research published last month by the job listing site Indeed suggests that the degree of the mismatch actually has narrowed since 2014.

In examining resumes posted to Indeed, the researchers found that roughly one-third don’t match the available jobs. Though that’s a relatively high proportion, it’s less than in 2014, when the proportion was closer to 40 percent.

A shortage of skilled workers, like nurses, might now exist in certain sectors of the economy, Gimbel said. But a shortage doesn’t necessarily exist across the entire economy. If it did, the pressures to raise wages would be stronger.

A Slowdown in Job Growth

When Joe Brusuelas scanned the September jobs report, he saw signs that a shortage of skilled workers could emerge in the near future. He’s the chief economist for RSM, a consulting firm that specializes in mid-size businesses.

“Over the past 12 months, we should start to see the pace of hiring grind down,” he said.

Brusuelas sees fewer people entering the labor force, a consequence of lower birth rates and other demographic changes as the vast baby boom generation retires. In June, the growth of the labor force was 1.2 percent compared with a year earlier.

By September, the 12-month growth in the labor force had more than halved to 0.52 percent.

Fewer people entering the job market could cause employers to slow their pace of hiring because they couldn’t find enough skilled workers.

The Trump administration’s drive to limit immigration could worsen any shortage of qualified workers.

Brusuelas suggested that employers who foresee a lack of qualified workers might broaden their searches to groups they wouldn’t previously have considered for hires.

He estimated, for example, that 8 million to 10 million people with felony records can’t fully participate in the job market now. Bringing these people into the job market is among the priorities of President Donald Trump’s daughter Ivanka.

Josh Boak is a reporter for The Associated Press.