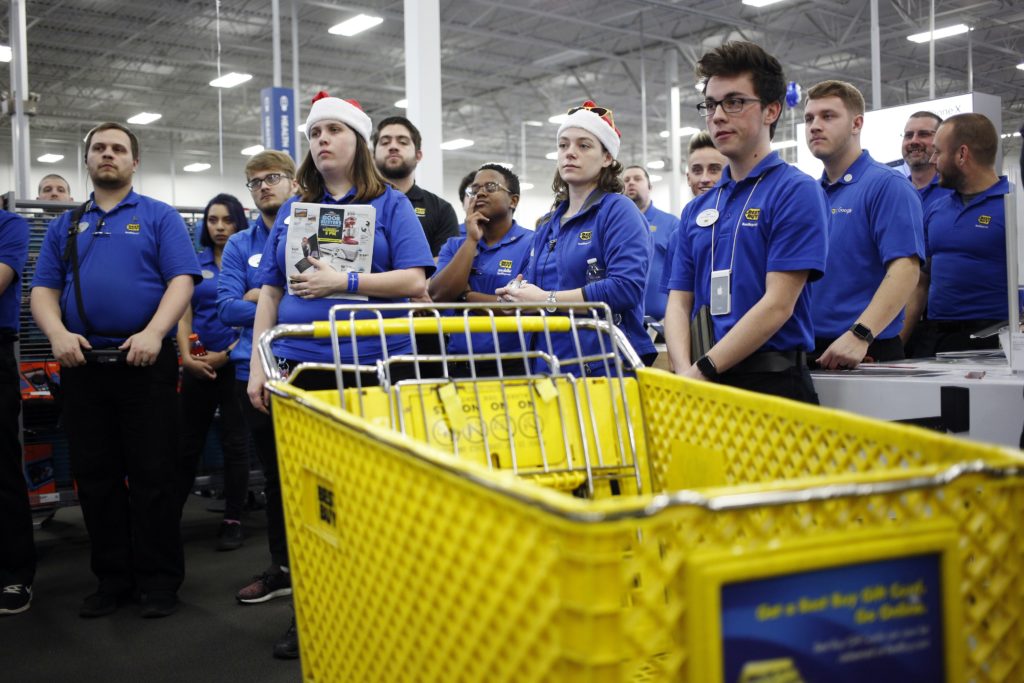 Employees gather for a meeting before opening the doors at a Best Buy store in Louisville, Ky., U.S., on Nov. 23, 2017. MUST CREDIT: Bloomberg photo by Luke Sharrett

It’s only fall, but the holiday hiring frenzy is in full swing.

For proof, just walk through the mall: “We’re hiring and we’d love to meet you,” signs outside Pottery Barn and Pottery Barn Kids said on a recent weekday at Tysons Corner Center, a sprawling northern Virginia shopping mall just outside Washington.

Macy’s played up “bonus potential” for holiday hires, while McDonald’s promised perks such as free meals, $50 worth of monthly transit cards and “team celebrations.”

In other words: Retailers need help — and they’re desperate.

At stake is what is expected to be the strongest holiday season in years, as retailers look to cash in on a surge in consumer confidence. The unemployment rate is at historic lows, the stock market is at record highs and wages are inching higher. helping to boost sales at a number of big-name chains, including Walmart, Nordstrom and Home Depot. Holiday sales are expected to rise as much as 5.6 percent to a record $1.1 trillion, according to estimates from Deloitte.

“There is a definite war for talent,” said Andrew Challenger, a vice president at job placement firm Challenger, Gray & Christmas. “Just as we have this huge spike in consumer demand, retailers are dealing with tightest labor market in 45 years. Whether or not retailers can hire enough people this holiday season could have a real impact on their sales.”

In all, retailers are expected to hire 700,000 seasonal workers this holiday season, up 5 percent from last year, according to Challenger’s firm.

Nationally, retailers say they plan to pay as much as 54 percent more than they did a year ago, according to a survey of 1,000 hourly employers by Snag, an Arlington, Va.-based online staffing platform for hourly work.

They are increasingly offering a chance at other perks, too: $500 gift cards at Target, all-expenses-paid vacations to Miami and New York, as well as $5,000 “prize packages” at J.C. Penney. Beauty chain Ulta is giving holiday hires half-off haircuts, while Gap and Old Navy are advertising employee discounts of 50 percent, as well as back-up child care and free flu shots. Williams Sonoma declared September to be “national hiring month,” promising on-the-spot store interviews to anybody who wants one.

Kohl’s, which began hiring seasonal employees in July, is providing Thanksgiving day workers with a turkey dinner and doling out gift cards for perfect attendance during the holidays. Also new this year: A designated shopping day when employees will get 35 percent off all purchases, including brands like KitchenAid and UnderArmour. (The retailer’s usual employee discount is 15 percent.)

“The number-one thing on our mind is that it’s competitive out there,” said Ryan Festerling, Kohl’s executive vice president of human resources. “The holiday season literally starts and ends with, how do we make sure we have the right amount of associates?”

Festerling added that the company already has hired “many, many thousands” of workers and will continue to do so through early November. The retailer plans to hire 90,000 workers this year, up from 69,000 two years ago.

“It’s an aggressive hiring plan,” Festerling said. “It has to be.”

The holidays are a busy time at Hill’s Kitchen, a homewares shop in Washington’s Capitol Hill neighborhood that brings in 20 percent of its annual revenue in December alone. Owner Leah Daniels said she’s learned to hire accordingly — increasing the number of employees at the store from one to six during the holidays.

But this year, she said, it’s been harder than ever to find interested workers.

“I used to have no problem getting people to work holidays or weekends,” she said, “and now it’s like pulling teeth to get them in the door.”

And although in the past she’s waited until mid-November to hire seasonal workers, “this year, if I find somebody who’s good, I will hire them right away and eat the expense for a few months,” she said. “That’s how difficult it’s become.”

Retailers around the country have announced plans for record numbers of seasonal hires this year. Target plans to employ 120,000 holiday workers, a 70 percent increase from five years ago, while Macy’s has announced plans to hire 80,000. UPS, meanwhile, says it will hire 100,000 workers this holiday season, up from 95,000 last year.

The country’s largest retailers — Walmart and Amazon — have yet to announce their holiday hiring plans, although Bloomberg recently reported that Walmart was surveying employees on which perks, including pet care and gym memberships, would be most likely to attract new hires. Amazon, meanwhile, has in recent weeks begun offering small hourly raises, starting at 25 cents per hour, to its warehouse workers. (Jeffrey P. Bezos, the founder and chief executive of Amazon, owns The Washington Post.)

“While e-commerce is very easy for the consumer, it’s a very labor-intensive process for retailers, especially in fulfillment centers,” Neil Saunders, managing director of research firm GlobalData Retail recently told The Washington Post. “The challenge for retailers is going to be filling all of these posts.”

“Last year there was an awareness that the labor market was tight, but this is the first year we’re seeing employers talk about potential increases in pay and benefits,” said Fabio Rosati, chief executive of Snag.

Target, for example, has raised its starting wage to $12 an hour and is offering 20 percent employee discounts on certain items, including fruits, vegetables and workout clothes. The company also is setting aside more than $2 million to give $500 gift cards to one randomly selected employee at each of its 1,800 stores and 39 distribution centers.

While retailers are advertising more seasonal jobs than before, other industries are scaling back on temporary positions, according to an analysis of job postings by the site Indeed.com.

“What we’ve seen is surprising: Seasonal job postings in areas like trucking and warehouse work are slower than they were last year,” said Andrew Flowers, an economist for Indeed. It is likely, he said, that those industries are using the holidays as an opportunity to attract full-time, permanent workers, not just temporary employees who might move on after a month or two.

“In this job market, it’s not that appealing to say, ‘Hey, come work with us for a few months,’ ” he said. “Today’s workers expect more.”

That, said Wayne Bronner, is certainly the case at Bronner’s Christmas Wonderland, a year-round retailer of ornaments, trim and other holiday cheer based in Frankenmuth, Mich. Bronner said he plans to hire 150 seasonal workers this year and has raised the starting wage to $10 (up from the area minimum wage of $9.25) and pays time and a half on Saturday evenings, Sundays and holidays.

The strong economy might actually work against employers, Saunders said.

“If people are feeling better off — which a lot of people are — that could deter those workers who would traditionally enter the market temporarily to make extra money during the holidays,” he said. “This is a good thing for workers, but not for retailers.”

Abha Bhattarai is the national retail reporter for The Washington Post.