Home » Uncategorized » The HR Pro: Fear Is the Wrong Response to #MeToo 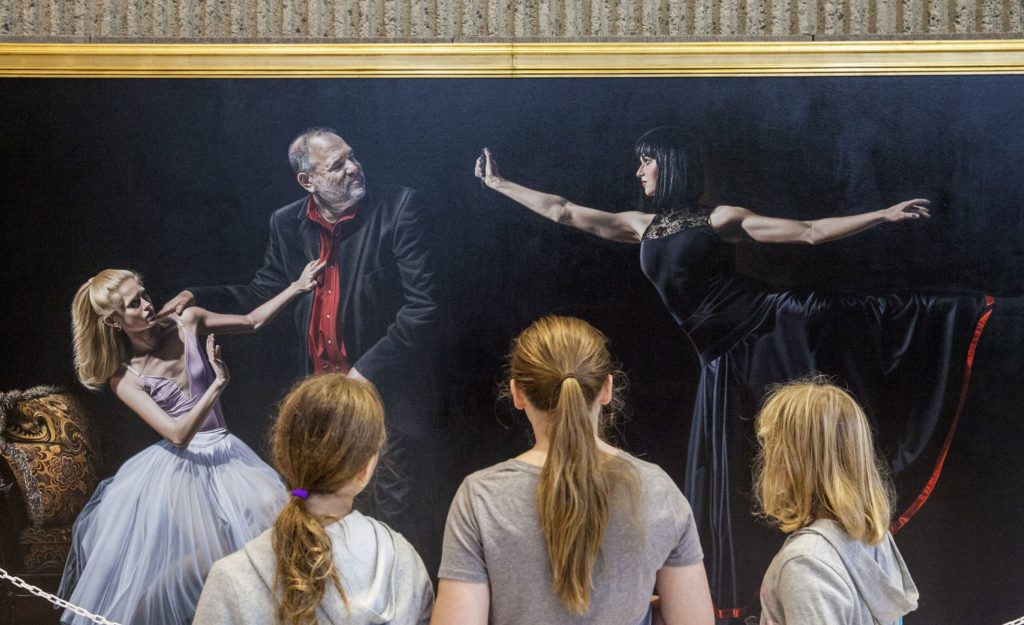 Children look at Kevin Grass' and Michaela Oberlaender's ArtPrize entry "Not #MeToo: No More Casting Couch" at the Gerald R. Ford Presidential Museum in Grand Rapids on Wednesday, Sept. 19, 2018. The work is about sexual harassment in America. According to the artwork's description: "It shows one ballerina rebuffing Harvey Weinstein, while the other one is ready to pepper spray him. These ballerinas are not comfortable with the idea of the 'casting couch.' The Harvey Weinstein scandal began the #MeToo movement that is changing what is considered acceptable behavior between individuals. The piece shows women empowered to fight back against sexual abuses." Cory Morse | MLive.com 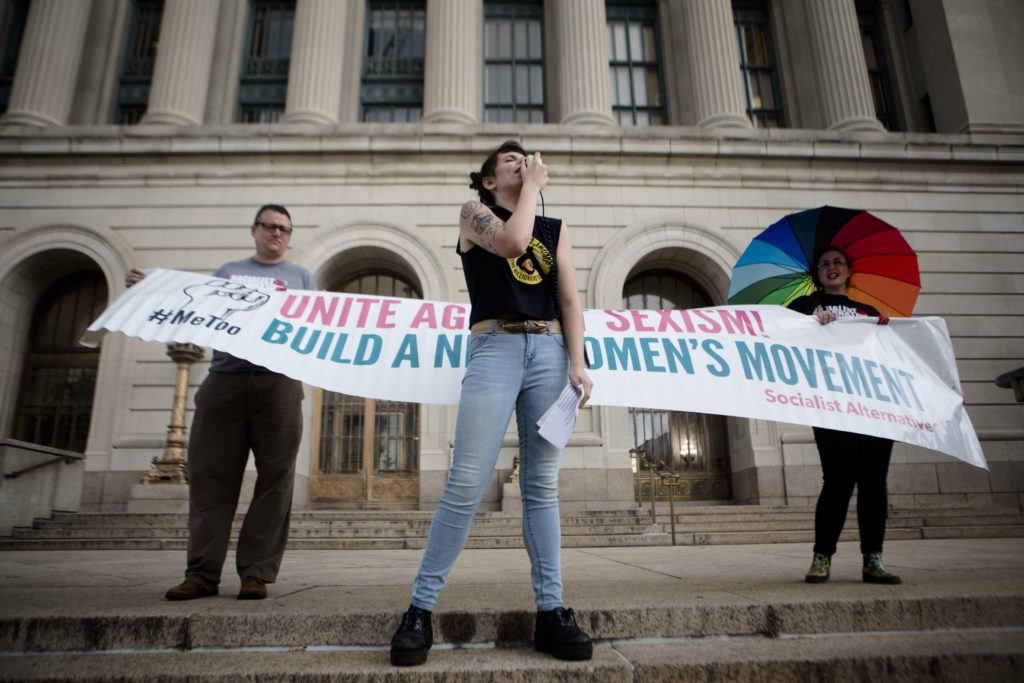 Emma Wilson leads a chant during the "#Cancel Kavanaugh Take #MeToo into the Streets" protest on Thursday, Oct. 4, 2018, in Cincinnati. (Albert Ceasare/The Cincinnati Enquirer via AP)

It’s become known as the Mike Pence rule, but some men see it as a way of protecting themselves from potential sexual harassment accusations.

The vice president never eats alone with a woman other than his wife, according to a Washington Post article last year, and he won’t attend events featuring alcohol except in her company.

“It was really unhelpful when he said that,” W. Brad Johnson, a psychology professor at the United States Naval Academy, said. “It sounds chivalrous — ‘I’m protecting the little lady’s reputation’ — but really it’s just sexism.”

Johnson, co-author of the book, Athena Rising: How and Why Men Should Mentor Women, is among those who have seen the #MeToo movement result in men avoiding close interactions with female colleagues, fearing that something may happen that leaves them vulnerable to sexual harassment accusations.

He points to a survey earlier this year by Sheryl Sandberg’s Lean In organization that found the #MeToo movement has made more male managers reluctant to mentor, work one-on-one, socialize or go on business trips with female colleagues.

The issue has created a lot of unwarranted fear among men, Johnson said, that they’ll do something that inadvertently or otherwise offends and leads to a charge of sexual harassment.

“There’s this false narrative that there are lots of women ready to make false accusations,” he said. “It’s kind of a fake cause for anxiety.”

Michelle Daugherty Siri, executive director of the Women’s Law Center of Maryland, said there is a persistent sense that women lie about men in power, despite the fact that those who do make accusations, true or false, often pay a high price for it.

“What do they get out of it?” Siri said. “They often don’t get the result they want, they get vilified for it and they risk retaliation.”

Cynthia Calvert, an Ellicott City, Md.-based lawyer and business consultant, said that while some men are shying away from private meetings or business trips with women, others understand it’s discriminatory and can lead to legal liability if women are not given the same opportunities as men.

“There is a backlash in some quarters, but I’m also hearing people thinking through these issues,” said Calvert, president of Workforce 21C. “There’s more reflection and open conversation.”

“The best thing to do is be above board,” she said. “Establish relationships with a wide variety of people, and develop trust in yourself that you’ll be able to be in situations with different people without offending them.”

Keeping a distance from female colleagues can deprive them of experiences and opportunities that allow them to rise in a company, experts say, perpetuating a gender power imbalance that creates a climate for sexual harassment. Research by Sandberg’s group shows that the number of women drops at every ascending level in corporate America, to the point that only one in five chief operating, financial, executive and other C-suite officers is a woman — and less than 1 in 30 is a woman of color.

The “glacial” pace at which more women are entering the highest ranks in corporate America makes cross-gender mentorship even more important, Johnson said.

In Maryland, for example, the number of female managers grew by about 7 percent between 2010 and 2016, according to estimates from the state’s Department of Labor, Licensing & Regulation.

“This is also a business issue,” Johnson said. Multiple studies have shown that companies with more women in their upper ranks tend to be more profitable — experts say the diversity leads to less “groupthink” and more innovative decision-making, and the opportunities for women to advance boosts recruitment and retention rates.

“Companies are figuring this out,” Johnson said. “It’s not just women who have to talk about this among themselves.

Jean Marbella is a reporter on The Baltimore Sun‘s investigative and enterprise team. She joined The Sun in 1987 and has been a health reporter, a feature writer, a national correspondent, an editor and a metro columnist.