The HR Pro: Making an Exit 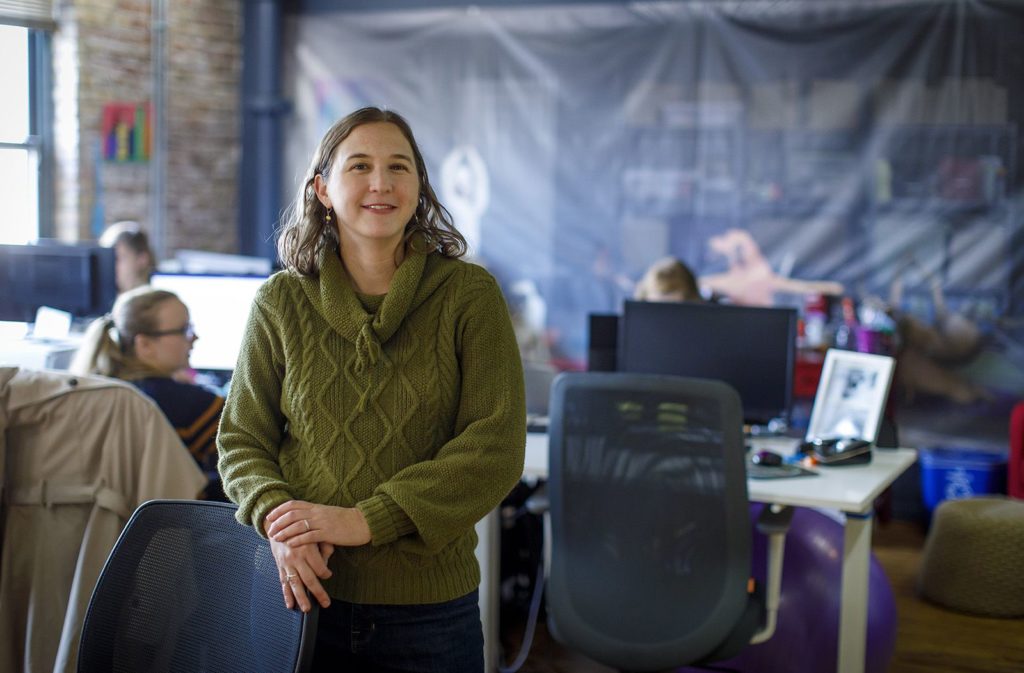 Chicago-based Jellyvision, which designs benefits enrollment software, has a "graceful leaving" policy that encourages employees to inform the company of their intent to leave. Lesley Tweedie, senior accounting coordinator at Jellyvision, took advantage of that policy. (Brian Cassella/Chicago Tribune/TNS)

People are quitting their jobs at the highest rates in nearly 20 years, a sign that they are finding and landing other opportunities.

The national quits rate — the percentage of employed workers who quit their jobs in a given month — reached 2.4 percent for three months last summer, the highest level since the start of 2001, before dipping to 2.3 percent in October. The U.S. has 7.1 million job openings, compared with 6 million unemployed people seeking work.

Those odds can make it tempting to throw your computer out the window, flip your boss the bird and slam the door behind you.

But experts advise both employers and employees to handle quitting with care.

“It’s already a traumatic time,” said Tom Alexander, CEO of Holistic, a Chicago company that helps employers analyze workforce and employee experience data. “Everybody really needs to be on their best behavior.”

The Spectacular — If Ill-Advised — Quit

Sometimes, though, frustrations mount to the point of explosion, resulting in dramatic quitting scenes many people dream they had the guts to pull off. A teen working at a Walmart in Canada recently made headlines for quitting over the store intercom, announcing to shoppers, “Nobody should work here — ever.”

Philip Wizenick had his I-can’t-take-it-anymore moment while tending bar in the 1980s at King Arthur’s Pub, where an expense-account crowd gathered for three-martini lunches in the swanky Rolls Royce Room.

Wizenick was helping a waiter fill a large tray with drink orders when a young couple sat at the bar, and he made eye contact to let them know he would be right there. But one of the owner’s sons ran over and started yelling at him to serve the couple, prompting Wizenick to take off his mess jacket and hand it over.

He recalls saying, “You tend bar,” and walking out.

Wizenick, who was able to land another bartending job in the Loop in no time, said he can’t imagine handling it any other way.

“It builds up and builds up because you get a boss that’s on you constantly for no good reason,” said Wizenick, 73, who lives in the Streeterville neighborhood. “You can’t let it slide.”

Though telling a boss to shove it is ill-advised, it’s hard to find anyone who regrets doing so.

Shawna Coronado reached the end of her rope when she was called into her boss’ office first thing one morning and was asked to start working weekends. Coronado, who worked in the marketing and sales department at a recruiting firm in Chicago, already was pulling long hours and feeling burned out, and she refused.

“She started yelling at me,” Coronado recalled of the expletive-laden screaming match 10 years ago. “I walked out.”

Coronado sobbed on the train ride home to Warrenville, Ill., worried about supporting her family of four with her household income cut in half. But within 24 hours, she felt freedom from her 15-year corporate career and, at the suggestion of her mother-in-law, started exploring how to turn her enjoyment of gardening into a job.

Coronado watched her blood pressure drop and her allergies ease as she helped an area landscaper install garden designs. She now is an author and speaker on wellness and gardening topics, earning less than her corporate paycheck but enough to live comfortably. She said her dramatic quit was transformative.

Heather McCabe was just a few years out of college when she quit in a blaze of glory. A webmaster for a Chicago startup where everyone pitched in to stuff envelopes and do administrative tasks, her title was important to her as she tried to launch a career in web design. So she was taken aback when her boss introduced her as a secretary at the company’s first board meeting.

The next day, McCabe reformatted her hard drive so that there would be no trace of the work she had done to build the website, and put a sticky note on her computer monitor that said, “I Quit.” She walked out without saying a word to anyone.

“It was huge and it was awesome,” McCabe remembers feeling about her abrupt exit 15 years ago. “It felt really powerful; it felt like I was really taking a stand.”

It was a risky stand for someone potentially in need of references, but a previous employer hired McCabe for several freelance web design projects, and soon enough she was able to drop the startup from her resume.

McCabe, who now leads a team of web producers at a Chicago-based digital marketing company, said she would never quit on a sticky note today, and explains that her younger self didn’t have the confidence to communicate her frustration about the title error.

Still, she doesn’t regret it. If she had a do-over, she said, she would have signed the note, “From your webmaster (not your secretary).”

Of course, the drop-the-mic approach is not the recommended way to resign, no matter how satisfying it feels in the moment. Julie Meyers, talent acquisition director at the Chicago-based consulting firm West Monroe Partners, has been on the other side of it, and can attest to its poor long-term consequences.

At a previous employer where she worked as manager of the recruiting team, Meyer had one employee who just stopped showing up — who, in the parlance of dating, “ghosted.”

Robbie Abed, 36, of Orland Park, Ill., took the opposite approach when he quit his job as a management consultant in Deloitte’s Chicago office, and he is the enjoying the fruits of that decision.

In addition to giving three weeks’ notice, Abed sent a humorous thank-you email that named about a dozen colleagues and gratefully detailed how each had contributed to his experience. The note caught the attention of the CEO of U.S. consulting at the time, who forwarded it to all 10,000 consultants in the country as a “wonderful illustration of how we actively mentor.”

Abed was so proud that he wrote a how-to book about quitting.

“Because of the way I quit, I keep great relationships,” said Abed, who now does freelance marketing for information technology companies and gets many clients as a result of those relationships.

“You will cross paths with everyone again,” he said.

That means employees should give at least two weeks’ notice and help with the transfer of work, and employers also should be gracious.

Employers often make the mistake of taking the resignation as a personal affront, and when they get bitter, it harms the culture among the remaining employees, Alexander said. They also reflexively scramble to retain people, which shouldn’t happen when employees are on their way out the door.

Rather, employers eager to keep top performers should proactively seek out and respond to their concerns and ensure they have advancement opportunities, while giving less successful employees honest assessments of their future at the company and supporting their efforts to move on, Alexander said.

Some companies take that culture to the next level.

Chicago-based Jellyvision, which designs benefits enrollment software, has a “graceful leaving” policy that encourages employees to inform the company of their intent to leave long before they have accepted another offer or even started to look. Most employees are encouraged to give two months’ notice, while leaders are asked to give four.

In return for the ample heads-up, which allows the company to plan for a replacement as well as offer opportunities that might entice the employee to stay, the short-timers are supported in their job search, given time off to interview, and treated no differently from their colleagues. They get planned raises and feedback like everyone else.

“It’s kind of like a breakup where you stay friends with your ex,” said Kelly Dean, vice president of people at Jellyvision.

Jellyvision employees are told about the policy on their first day, though as the company has grown, it has become more difficult to convince people that it’s real, Dean said.

But she finds the normal quitting process — when someone she has worked with for years tells little lies about going to doctors’ appointments and then disappears in two weeks — far stranger.

Lesley Tweedie hadn’t been working at Jellyvision for long before she realized her job wasn’t quite the right fit.

She had seen other people take graceful leave, so she mustered up the courage to tell her boss she wanted to transfer to another department and planned to look externally if that didn’t work out.

“I was super nervous,” Tweedie, 38, recalls. “But I felt so much better after I had the conversation.”

Her boss sent a note to the company’s senior leadership asking them to keep an eye out for more strategic roles, and supported her when she applied for them.

More than a year after sharing her concern with her boss, Tweedie remains in the same job as a senior accounting coordinator at Jellyvision, but she is happy that she has been truthful about her ambitions.

At West Monroe Partners, managing partner Mike Hughes said the biggest frustration is when people resign for reasons the company could have worked through had it been informed earlier.

Forty-five percent of employees admit to applying for jobs after a bad day at the office, even as 82 percent report being loyal to their employers, the company’s research has found, suggesting they have little patience for feeling dissatisfied when job options are plentiful, Hughes said.

The company conducts regular pulse surveys so it can address concerns before they drive people out.

West Monroe also gives employees access to career advisers who help them explore their next steps, whether that involves staying with the firm or leaving. After all, Hughes said, “They could become a future client.”