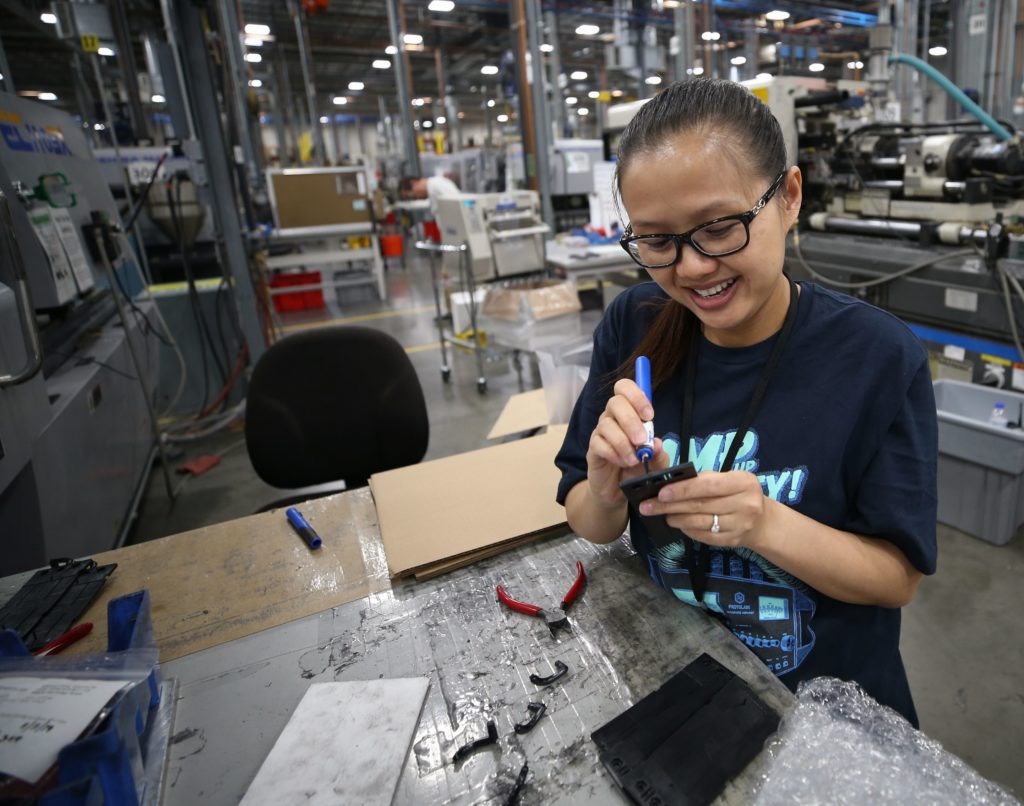 Protolabs trainer Truly Paw said the company's drop in health care premiums - from $300 to $55 a paycheck in her case - helped her stay at her job. (Shari L. Gross/Minneapolis Star Tribune/TNS)

Over the past five years, the high-tech manufacturer Protolabs has doubled its sales and nearly quadrupled its head count. With 2,700 employees today, it expects to add 650 this year.

In the tight labor market of recent years, finding and keeping people has been a challenge. So the company, known for making complex prototypes on deadline, took a step that is becoming increasingly common — getting more generous with health benefits.

The Minnesota company now pays 97% of medical costs for all manufacturing employees and has brought down the price of its plan for spouses and kids. In 2015, employees paid $6,900 a year and up for a family plan, while today annual premiums run as low as $1,320, or $55 a paycheck.

“I think that people are starting to look at ways that they can be creative,” said Renee Conklin, vice president of human resources. “Again, it isn’t just about money. It’s about how can you be an employer of choice and offer things that are important to employees.”

In a trend that reflects both the strong economy and the growing cost of health care, the Society for Human Resource Management, found that 34% of U.S. employers enhanced employee benefits between June 2017 and June 2018, mostly to attract and retain workers. That’s up from 19% in 2016.

Mankato, Minn.-based V-Tek Inc. recently increased health insurance choices for workers and doubled the contribution to each employee’s health savings account from $500 to $1,000 a year.

That “helped us bring in younger workers who were in their 30s or under,” said Christina Hogan, vice president of the 100-employee company that packages semiconductor components for auto, aerospace and medical firms. Young workers liked the higher HSA contribution. Baby boomers liked having more deductible options, Hogan said.

Employers and employees say the changes make a big difference.

When Truly Paw joined Protolabs’ Rosemount, Minn., plant in 2014, the production trainer would have paid five times the premium she pays today to cover her preemie daughter and 4-year-old son. Luckily Protolabs slashed its costs soon after she arrived.

“They have a pretty good health care plan, now. I can afford it at only $55 a check,” Paw said. “If they had kept (the family premiums) at $300 a paycheck, I would never have been able to pay that. I don’t think I would have (stayed). But I think things worked out for me pretty good.”

Nearly three years ago, Alexandria Industries was so pressed to keep and attract skilled workers in its rural region that it opened a free health care clinic for employees — just a block from one of its three aluminum extrusion plants in Alexandria.

Workers pay nothing for clinic visits. Common prescriptions for infections, the flu, high blood pressure and cholesterol, asthma and diabetes are also free to workers and their families.

The clinic helped slash total health insurance costs and was a “huge” factor in recruiting 88 new hires at a time when retirements had picked up, spokeswoman Patty Hoffman said. The clinic cost $300,000 and paid for itself by February 2018, thanks to added staff, production and sales gains that followed.

“It’s absolutely a tight labor market,” but the clinic “draws people to us,” said Lynette Kluver, Alexandria Industries organizational development director. “The clinic is a game-changer.”

“It’s so busy we just had to add a full-time clinic administrator” to the two nurses and doctor who run the facility, Hoffman said.

Human resource managers from SHRM said many factories are squeezed. While they often pay decent wages, they must keep up with benefits or risk losing their skilled workers to competitors dangling higher wages and incentives.

The Pohlad family, which owns the Twins and Carousel Motor Group, bought Par Systems in late 2017 and quickly made changes.

It started a $600 health savings account for each of Par’s 160 Minnesota workers. It raised its 401(k) match and offered six weeks of paternity leave for the first time.

The changes brought Par in line with benefits at other Pohlad Cos. manufacturers and helped when the new owners started hiring. Staff jumped 20 percent to 400 in 18 months at Par and other Pohlad plants in Oakdale, San Diego, Norfolk, Va., and Georgia.

“At Par, what we have always felt really strongly about is providing good benefits to our employees. We want them to have that safety net so they don’t have to worry. Because if they are worried they are not performing,” she said. It’s important to “compare well to larger companies.”

Still, O’Rourke acknowledges that boosting benefits “can be a Catch-22 if your customers already are saying that your costs are too high. Your employee-related costs factor into that. So you have to have a balance.”