In the Spotlight: Vermont trio competes in ‘The Great Food Truck Race’ 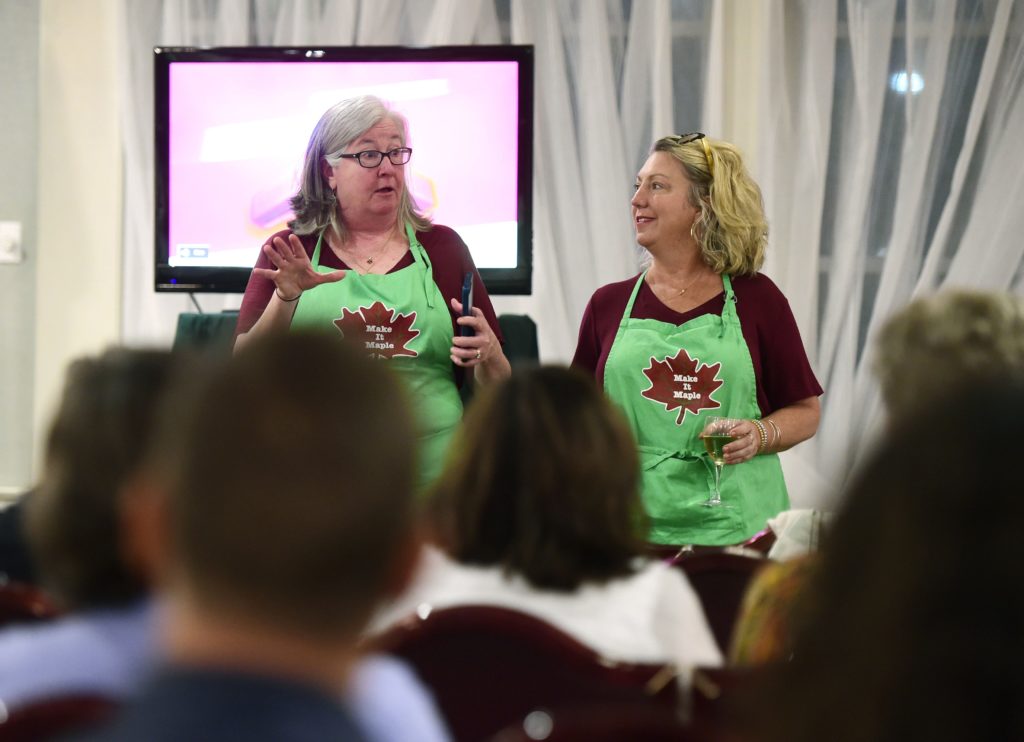 Sue Aldrich, left, and Paulette Fiorentino, both of Montpelier, Vt., explain some of the behind-the-scene details of their time competing on "The Great Food Truck Race" during a screening party for the opening episode at the Capital Plaza in Montpelier, Vt. on June 9, 2019. The reality program airs on The Food Network and the pair, along with Aldrich's son, Charlie, competed as the Make It Maple team. Photo by JWB/Times Argus

Competing in national TV contests has become something of a family affair for the Aldriches in Montpelier.

Most recently, Sue Aldrich was a member of Team Make It Maple in “The Great Food Truck Race” on The Food Network, which premiered in June.

The Aldriches are no strangers to national TV competition.

Sue Aldrich’s husband, Alex, the former executive director of Vermont Arts Council, was a quarter-finalist on the hugely popular Who Wants to be a Millionaire game show in October 2000, when he was finally knocked out but walked away with $125,000.

Sue Aldrich, who works as a realtor with Coldwell Banker in Berlin, Vt., was in an episode of HGTV’s House Hunters in April last year as well.

In Aldrich’s latest foray into the TV contest world, she and her son, Charlie, 23, teamed up with family friend Paulette Fiorentino, of Montpelier, to compete against eight other food truck entries from all over the country, competing for a $50,000 top prize. The culinary beach battle, hosted by Tyler Florence, hits a different Atlantic seaside town each week for high-stakes food challenges that test contestants’ cooking chops, business skills and selling strategies. Each week, a team with the least in sales is knocked out of the contest until there is an eventual winner.

The rub is, for Team Make It Maple, they were knocked out in the first round but were nonetheless excited and energized to compete.

The two families have known each other for years because their children went to school together and would share meals together.

“There were many long evenings and dinners with the kids, and when food shows came on, we would discuss them as part of our daily conversations and try to figure out how to handle the different challenges,” Fiorentino said.

“At one point, we thought, wow, it would be fun and funny, if we tried out for one, never thinking we would get on — ever,” Aldrich added. “We just kept moving up the chain of interviews, and one of the producers said we were on their ‘love list’ to be on the show, and lo and behold, it happened, which was just crazy and fun. I think we were just so charming.”

Aldrich noted that she was the oldest of the contestants. She said the team had no professional experience.

“But we’re funny and unusual in that we were two old ladies and a 23-year-old piece of eye candy,” Aldrich joked, adding that her son was outgoing and a good salesman.

“He brought the people to the truck — that was his job — and he sold it by way of mouth, chatting with teenage girls and older ladies,” Aldrich said.

Team Make It Maple had a hit with a maple hot dog and maple dumplings in the two-part round on the first day of the contest. The second part consisted of producing a superior Vietnamese maple chicken cilantro-glazed bahn mi sandwich. After day one of the contest, they were runners up in the first round.

But on day two, when they had to produce a dish with crab meat provided by The Food Network, they ended up being eliminated.

Aldrich and Fiorentino said they were surprised to be knocked out in the second day of the contest.

“No one was more surprised than we were when we were runners-up with the vegan team (Sol Food Collective, of Los Angeles),” Aldrich said. “After that, we were feeling pretty cocky that we were going to go on to the next round.”

Aldrich said she believed the team made some “tactical errors” that led to their elimination from the contest. Those included underpricing their food and making a bahn mi sandwich that was a too eclectic for buyers, who seemed more interested in comfort-style offerings by other teams.

“Myrtle Beach was just the wrong venue for that,” Aldrich said. “They loved the maple dogs and the maple dumplings but the bahn mi, with pickled vegetables, customers were like ‘What?’ ”

“It was also an expensive thing to make, so we used up a lot of our money, and it was labor-intensive to make, whereas the maple dogs and the maple dumplings were easy, and they flew out the window,” Aldrich said.

Regardless, the team members said they enjoyed the experience.

“We had a blast,” Fiorentino said. “We’ve never laughed harder.”

“We had a great time, it was experience, the other teams were phenomenally wonderfully, and it was a lark that we even there,” Aldrich said.

Despite their lack of experience, competing with some professional teams, Aldrich and Fiorentino said they might consider another try.

“Always, we should definitely,” Aldrich said. “I think they should have a redemption round and have us and some of the other first-time losers come back and do another food truck race.”

“I want to do some small catering, and if I could get my hands on a food truck, I would absolutely do it,” she added.