Fake snow is in high demand; just don’t ask how it’s made 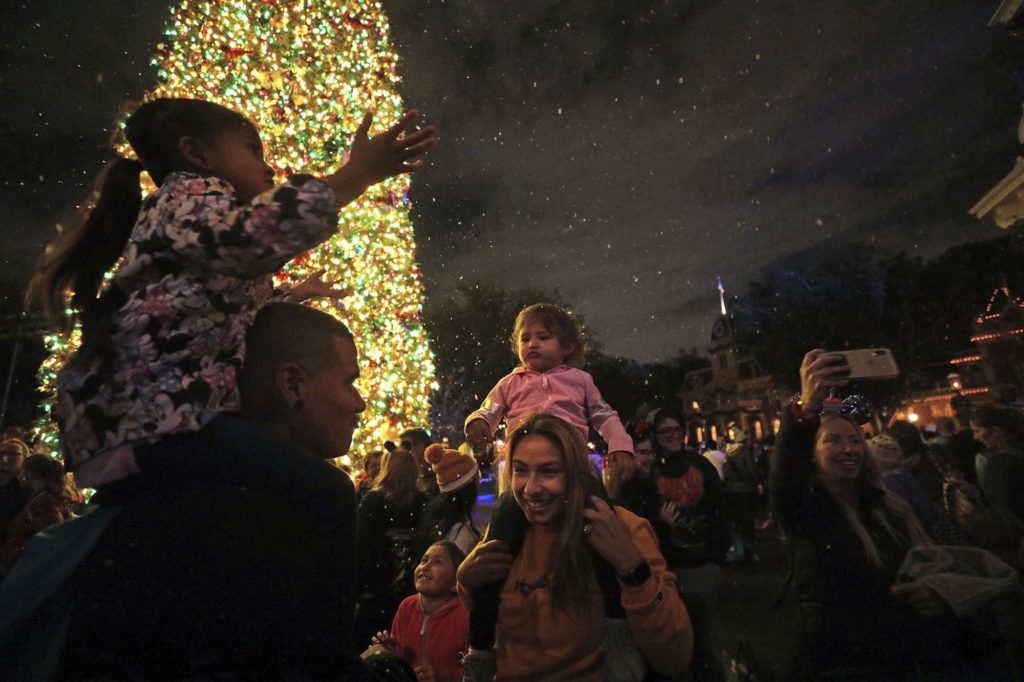 But the faces in the crowds really light up when the music fades and something unexpected gently falls from the sky.

A toddler, sitting on her father’s shoulders, spreads her arms and exclaims, “It’s snow!”

The white puffs drifting to the ground at the Anaheim, Calif., theme park are basically soap suds, shot into the sky by powerful air blowers stationed on the roofs of nearby buildings. The wintry effect has become a must-have holiday feature for malls, zoos, theme parks and tourist attractions across sunny Southern California.

Just don’t ask how this stuff is made.

The snow-making entrepreneurs enjoying the surging demand for fake snow are tight-lipped about the ingredients, the ratio of water to soapy additive and the equipment used to spread it.

“We can’t talk about the formula,” said Mike Giles, president of Global Special Effects, who boasts having produced artificial snow for “every major theme park you can think of.” He compared divulging his snow formula with asking Colonel Sanders to disclose the 11 herbs and spices in Kentucky Fried Chicken.

Big tourist attractions and shopping malls also keep mum for fear of shattering the illusion that the drifting white stuff is created when tiny ice crystals in clouds stick together to form snowflakes — and this might raise pesky questions about how the foam is really made.

But part of that secret formula has leaked out through documents that the snow makers must produce under federal rules. More on that later.

Artificial snow has been used to create a holiday atmosphere for decades, but in the last few years the call for faux snow has surged as improved snow-making technology has come closer to simulating the real thing.

The International Assn. of Amusement Parks and Attractions expo in Orlando, Fla., this year included 13 companies that make imitation snow, up from 10 such businesses two years earlier.

Disneyland, Universal Studios Hollywood and Legoland in Carlsbad, Calif., have been featuring faux snow for many years. Other theme parks have added snow effects in recent years.

When accompanied by seasonal music and colorful lighting, the falling fluff is a magnet for holiday shoppers — especially for people who rarely come in contact with the real deal.

“The consumer has a number of choices where they can shop, and we want to make our experience the best,” said Julie Jauregui, senior vice president for retail operations and leasing for Caruso, the real estate company behind several shopping centers featuring fake snow, including the Grove, Palisades Village in Pacific Palisades, Calif., and the Americana at Brand in Glendale, Calif.

During a recent tree-lighting celebration at Universal Studios Hollywood, Stephen Siercks, the park’s senior director for entertainment, supervised as hidden blowers spewed artificial snow on a crowd assembled in front of a six-story-tall Christmas tree. An actor dressed as the Grinch helped power up the lights.

“The story of Grinchmas calls for snow and atmospherics,” Siercks said.

But he declined comment when asked about the chemical solution that made the foam, the number of gallons used and which snow contractor was hired.

Universal Studios Hollywood loves the effect so much that this year the theme park added falling snow inside of a retail outlet that specializes in Harry Potter merchandise.

Fake snow has been a staple of Hollywood moviemaking for decades. Special effects experts say the first use of soap suds as a stand-in for snow was the 1946 holiday classic It’s a Wonderful Life.

Before then, snow was replicated in films with cornflakes painted white. But the sound of actors stepping on the crunchy flakes was so loud that the dialogue had to be redubbed later.

Russell Shearman, one of the special effects artists working on It’s a Wonderful Life, solved that problem by creating a mixture of water, soap flakes, sugar and foamite, a material used in some fire extinguishers.

Shearman won an Academy Award for his snow effect and laid the groundwork for today’s snow biz.

In Southern California, one of the first malls to add fake snowfall to its holiday season was the Grove, the shopping district in the Fairfax neighborhood.

Adam Williams, the founder and president of MagicSnow, was an aspiring magician 18 years ago when he showcased a holiday magic act, ending with a sprinkling of snow, for Grove developer Rick Caruso.

Caruso was more impressed with the snow than with the magic and hired Williams to let it snow at the Grove. Caruso now has Williams create the effect at five of his retail centers in Southern California.

The snowfall effect has exploded in popularity, Williams said, thanks to improvements to the chemical snow formula that makes the clumps of suds so small and delicate that they almost evaporate on contact, thus eliminating the risk of turning the ground into a slippery mess.

“Once people saw it was successful and how it can be done, it took off,” he said.

Like others in the fake snow-making business, Williams wouldn’t elaborate about his special formula except to say that the primary ingredient is water.

Snow makers are required by federal law to provide a “material safety data sheet” that lists any potentially hazardous chemicals used in their work. Safety data sheets provided by several snow-making companies say the liquid pumped into the snow blowers is not hazardous and is mostly water — up to 98% of the formula — mixed with a “surfactant blend.”

Surfactants, according to chemists, are compounds used in many cleaning products, such as soaps and detergents, because they lower the surface tension of water, in essence making molecules slipperier. In the safety data sheets, the snow-making companies don’t offer more details about the blends of surfactants, saying that such information is “proprietary.”

Protecting the formula is important snow makers contend. The blend of surfactants and water is altered depending on whether the artificial snow is going to be made indoors or outdoors, or whether the client wants a light dusting or flurries.

“We’ve really spent a lot of time, put in a lot of effort and expense in creating the most realistic effect that we can,” said Adam Williams, the founder and president of MagicSnow.

The electronic blowers that spew the fake snow into the sky have also improved over the years, with motors that are more compact, more powerful and quieter than before, said Roland Hathaway, owner of Snow Business Hollywood in Canoga Park.

As with the soap-making formula, Hathaway was hesitant to discuss snow-blowing advancements.

“We spend a lot of time building it and creating our machines for a particular use,” he said. “We just want to keep it to ourselves. Someone could get ahold of it and take it to China.”

Regina Coffey, a nurse from San Francisco, knows the snow spewed on the crowds on Disneyland’s Main Street is not the real thing. But that hasn’t kept her and three of her best friends from visiting the theme park each holiday season for the last nine years to watch the nightly celebration that ends when the Southern California sky fills with wisps of white.