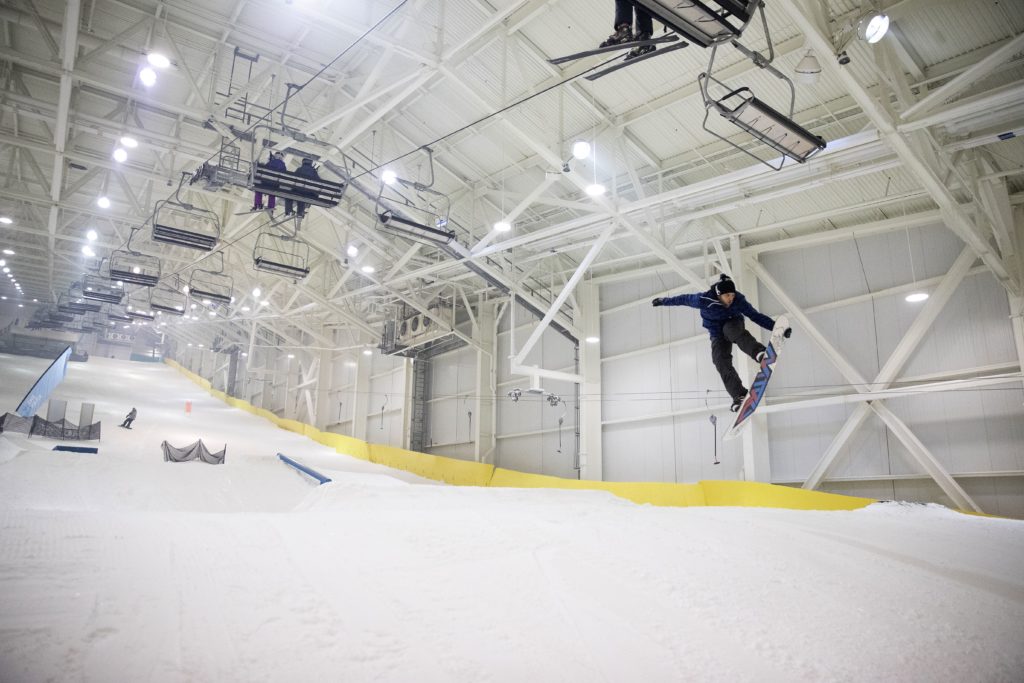 Lou Fermonte of Northfield, N.J., almost reaches the chairlift. “What’s amazing is I get to ride here all year long,” Fermonte says. “This is the future.” MUST CREDIT: Photo for The Washington Post by Michael Owens 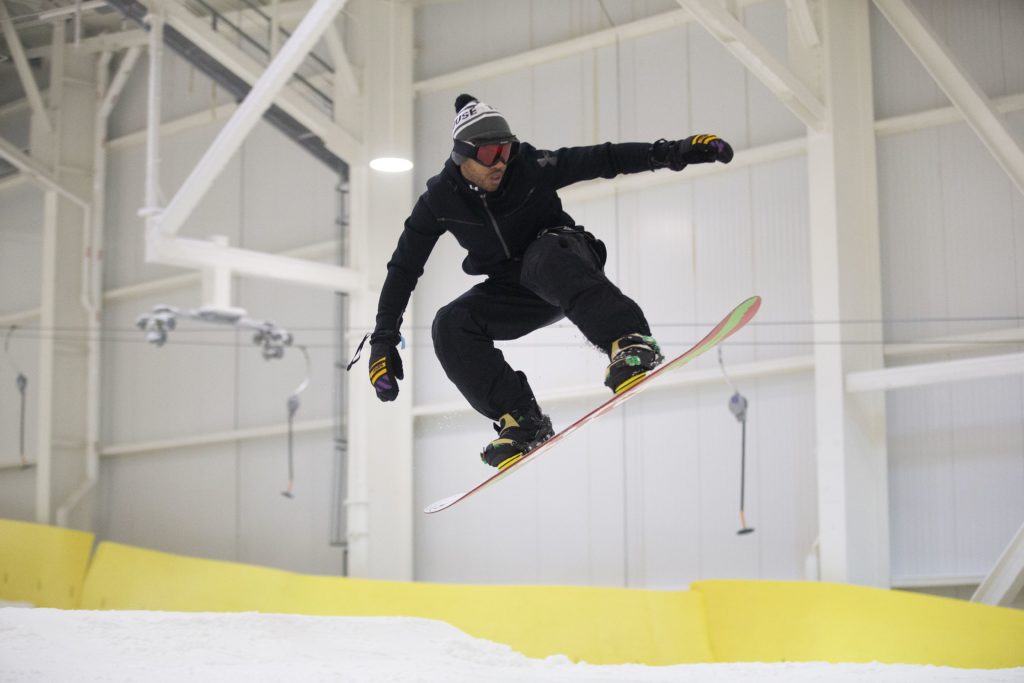 Daniel Blackstone of Mount Laurel, N.J., flies off of a ramp at Big Snow American Dream in East Rutherford, N.J. MUST CREDIT: Photo for The Washington Post by Michael Owens 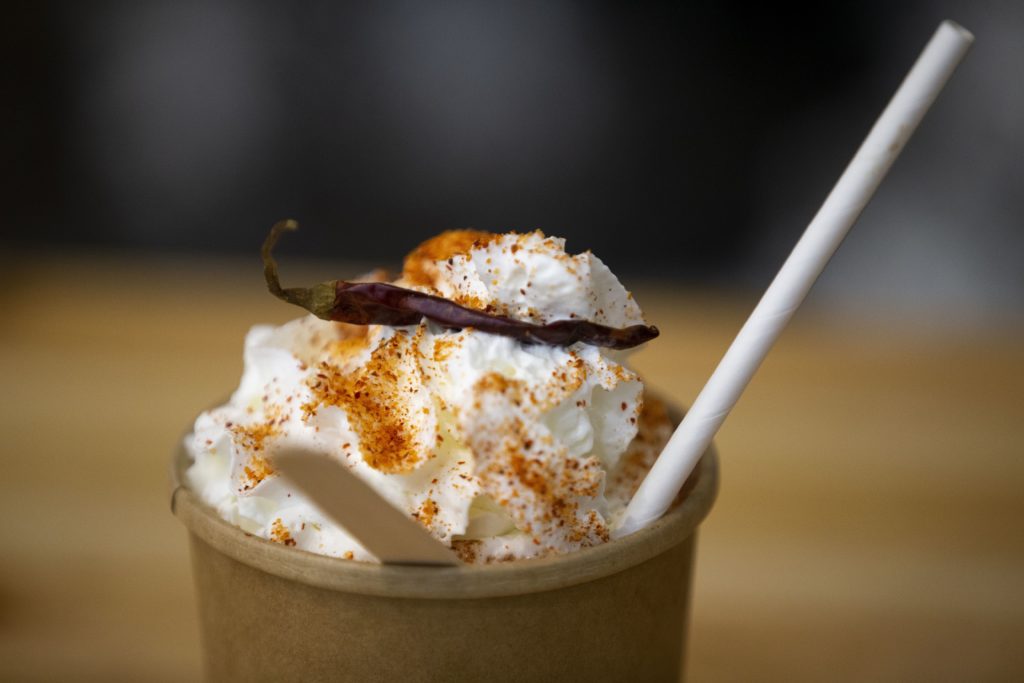 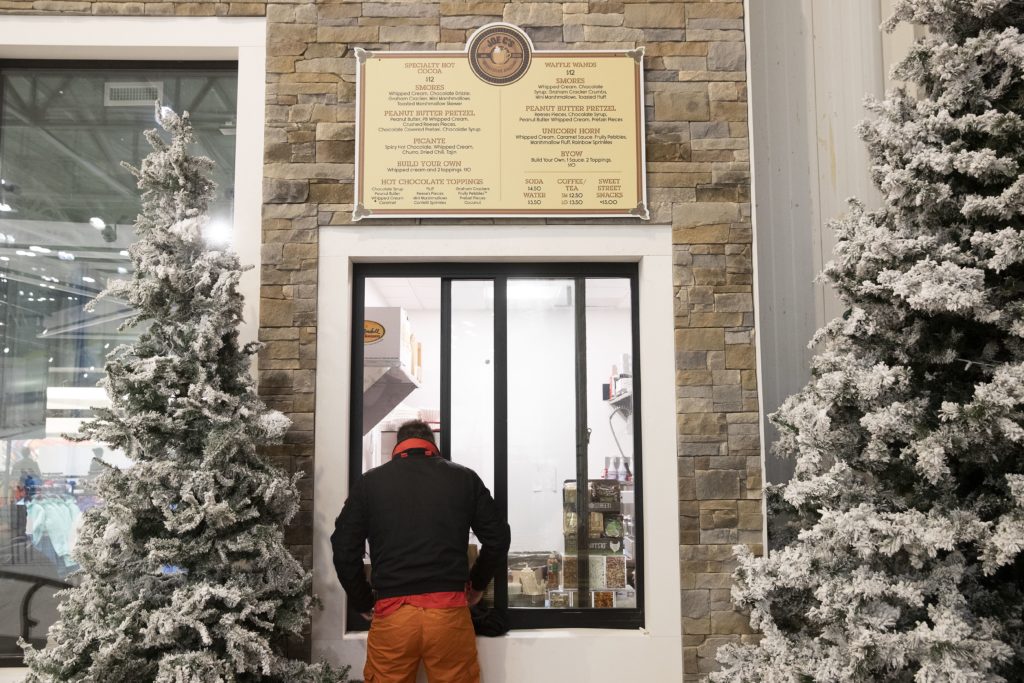 Douglas Nazur, from Astoria, Queen, places an order at Joe C’s Gourmet Coffee at Big Snow. MUST CREDIT: Photo for The Washington Post by Michael Owens 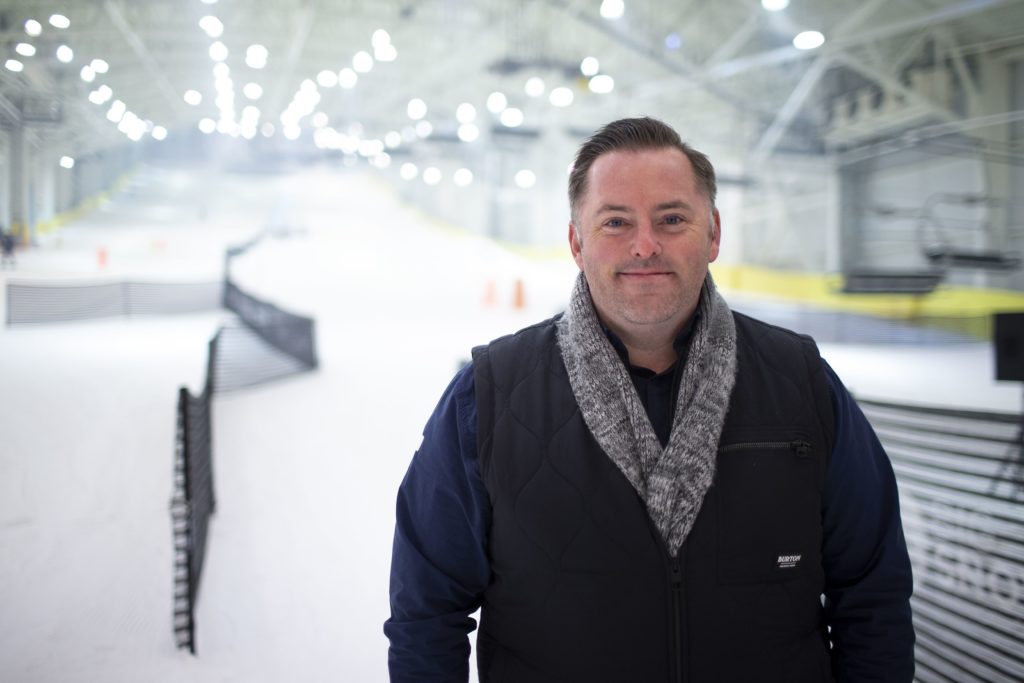 Which, of course, is a mall.

Actually, it is a $5 billion behemoth still under construction from the people who brought the U.S. the Mall of America. When done, this consumer cathedral will be our nation’s largest in square footage. And skiage.

The mall’s highlight is Big Snow American Dream, a mouthful for an audacious enterprise, which is more than 4 acres, packed with 5,500 tons of man-made powder and billed as North America’s first indoor, year-round, real-snow, real-slope ski and snowboard experience.

At first glance, Big Snow appears to be a head-slapping, refrigerated folly. It’s a lot of white stuff piled into a warehouse, dotted with trees and ersatz Alpinery. Mall skiing is an endeavor no one was asking for, akin to building a life-size replica of Noah’s Ark, which Americans have also done, in Kentucky — and, by the way, is equally jaw-dropping.

There are indoor ski centers around the globe, notably in Dubai, rich in sand, devoid of snow. Ski Dubai is a winter theme park, complete with penguins, a bobsled run and transparent Zorb balls that patrons climb into before rolling down the hill — like being inside a giant snow globe, except the snow is on the outside.

But East Rutherford is close to skiing of the outdoor variety. There are two New Jersey resorts an hour away, including Mountain Creek, owned by Joe Hession, the big guy at Big Snow.

So why sink $110 million into Jersey mall skiing? Because it may revolutionize the sport, expanding and diversifying its base. Still, do we want to take away the majestic glory of mountain snow sports by plunking them in a 16-story steel-and-concrete container?

One December Wednesday before lunch, Douglas Nazur, 41, a contractor from Astoria, Queens, hit the mall and the slope. (Technically, there are three trails, and a terrain park for hot-dogging.)

Originally from Ecuador, “a really hot place,” he said, Nazur had never snowboarded before Big Snow opened two weeks earlier. Now he’s on his sixth visit, and he’s zipping down the slope “without falling on the floor.”

Big Snow is no Vail, which may be the point. There are zero lines at the quad lift, and only a couple dozen boarders and skiers on the slope. Nazur completed four runs in less than an hour, three free of toppling, he said.

“I am committed to knowing exactly what I’m doing indoors this season,” Nazur said.

Nature is held in abeyance at Big Snow, where it is perpetually 28 degrees.

“It just feels weird, but in a good way. There’s no wind. There’s no sunburn. And you’re basically on the doorstep of New York City,” said boarding veteran Skip Hagerty, 36, a recreational sports consultant from Sayreville, N.J.

“We are definitely going to come here in the summer,” Braunsdorf said.

Hession, Big Snow’s president and CEO, said there are two barriers for people who want to ski and snowboard.

“The first is getting there. The second barrier is price,” he said.

Big Snow hopes to eliminate both.

It’s located in the country’s most densely populated state. Two-hour packages with all necessary gear (including pants and a jacket) are $69.99, and a block of six lift-only passes comes out to $16.66 a visit. To avoid interminable lift lines, only 500 patrons are permitted at a time on the trails.

“It’s bringing the mountains to the people, and abstracting the sport,” said University of Kansas professor Andrew Denning, who wrote a history of skiing. “It’s a form of democratization.”

The domestic ski industry is neither as robust nor as diverse as resorts operators desire, and it faces a mountain of obstacles. Climate change has been brutal and expensive.

Since 1983, the number of ski areas has contracted by more than a third; many of those shuttered were smaller, more affordable, family-owned operations.

Only 3% of Americans ski — 10.3 million patrons per season. They just talk about it so much that it seems as though more people do.

Skiing and snowboarding are what Hession classifies as “hard fun,” loaded with initial big hurdles (cost, travel, fear) but delivering big rewards — as opposed to the “easy fun” of watching other people compete at the sports on television. Four out of five people who first attempt the slopes never return.

Domestic skiing began in the 19th century, when there was nothing cushy or bougie about it. Until the advent of the chairlift in the 1930s, skiers had to trek up the mountain before they could schuss down. It was an activity of Norwegian immigrants in the Upper Midwest, Scandinavian immigrant miners in the West, and veterans of World War II’s 10th Mountain Division, who helped develop resort skiing in the Rockies.

Today, mastering moguls is the pastime of moguls, not to mention movie stars and Trump inamoratas, as Ivana and Marla famously clashed in Aspen in 1989. It is considered a diversion for rich, white people, which is not altogether wrong.

More than half of regular skiers earn annual incomes of more than $100,000, according to industry research, and 87% of them are white. Notre Dame history professor Annie Gilbert Coleman titled an essay on the subject The Unbearable Whiteness of Skiing. Snowboarding, attracting younger and less wealthy patrons, became popular in the 1970s and ’80s.

Baby boomers are aging out of snow sports. Millennials aren’t opting in. Skiing is an inheritance sport, highly predicted by geography and family. Half of all patrons begin skiing and snowboarding before the age of 11; more than three-quarters by age 21.

To attract a fresh, diverse crop of patrons, snow sports need to blow up the existing model, by being inexpensive, accessible, easy and — why, the heck not? — available more months of the year. They need to be more Jersey.

Hession anticipates half a million patrons during Big Snow’s first year of operation, half of them novices like Nazur, which would produce a 25% spike in national first-time visits. By comparison, Mountain Creek (a medium-size resort) averages 300,000 skiers per season. Vermont’s Killington, the East Coast’s largest destination, welcomes around 800,000.

So, when you think about it, why wouldn’t America’s newest ski resort be located in a mall off Exit 16W of the Jersey Turnpike?

Long the white elephant of New Jersey, American Dream took 16 years and three owners to build, and was previously named Xanadu. When completed, the mall will be 45% retail and 55% entertainment, including a Nickelodeon Universe theme park, and an NHL regulation-sized ice rink. Three restaurants will offer expansive second-floor views of Big Snow, providing entertainment for people who prefer chairs to chairlifts, the mall take on apres-ski without the ski.

It’s the mountains’ seemingly unconquerable beauty that first attracts people to ski and board. The mall removes people from nature. Indoor skiing follows “the natural trajectory of increasing dependence on technology and development. You want skiing to be out in nature,” said Coleman, the Notre Dame professor.

But she wishes skiing were “less expensive” and “more accessible.” Big Snow, she acknowledges, is both. “I hope it gets people to the mountains,” she said.

American Dream has yet to open the majority of its shops and restaurants, as well as the Angry Birds mini-golf and a massive DreamWorks water park with a wave pool and surfing. When the water park opens, Hagerty and Braunsdorf plan to snowboard and surf during a single visit.

On this Wednesday morning, Big Snow’s patrons are far more diverse than skiing’s snow-white image and include immigrants speaking multiple languages and plenty of novices. These are the industry’s dream patrons. Rappers Lil Uzi Vert and Meek Mill had visited Big Snow just days earlier. (Did Big Snow stay open late for Meek? Yes, it did.)

Veteran snowboarder Reuven Rowner and newcomer Azi Zimmerman of nearby Passaic hit Big Snow after their overnight nursing shifts. Army Staff Sgt. Daniel Blackstone, 32, who is Puerto Rican and from Mount Laurel, N.J., said, “It’s quick, indoor convenience,” something that has never been said of snowboarding.

Hession strolls through the mall. A plump smile appears as he passes patrons lugging skis over one shoulder heading to the escalator that leads to Big Snow. It is beyond bizarre, skis in the mall, until it doesn’t seem bizarre anymore.

Read the print version of Enterprise