By LISA RATHKE and PATRICK WHITTLE, The Associated Press - Jul 23, 2020 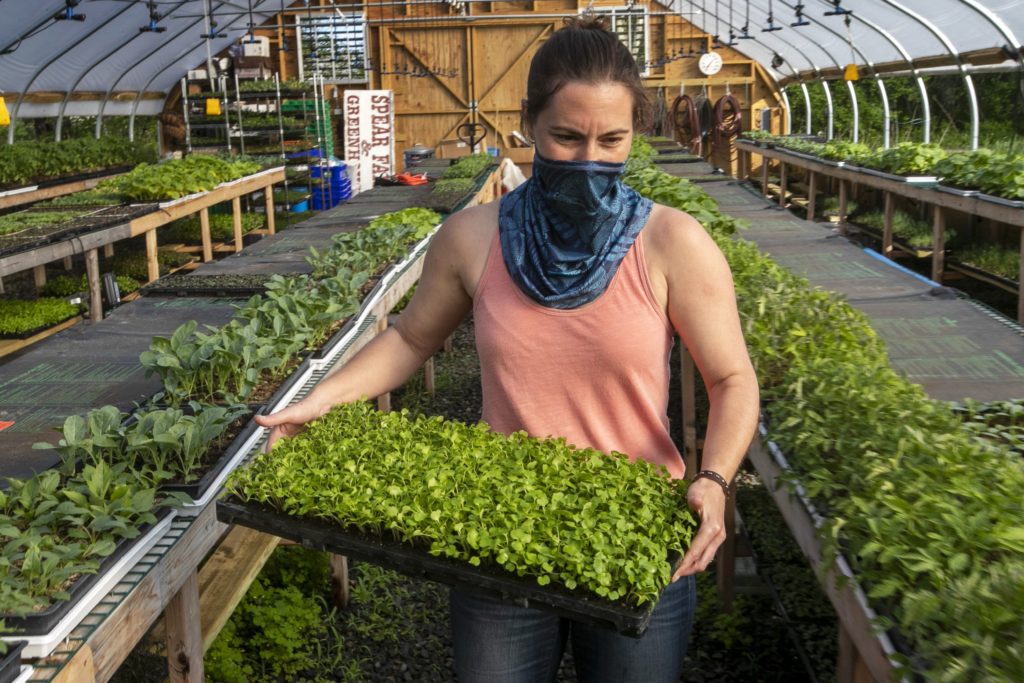 In this Thursday, May 28, 2020 photo Jamien Richardson moves a tray of baby arugula in a crop house at Spear Spring Farm in Warren, Maine. Spear Spring is one of many farms that have seen an uptick in the number community supported agriculture shares sold to customers, most likely as a result to the coronavirus pandemic. (AP Photo/Robert F. Bukaty) 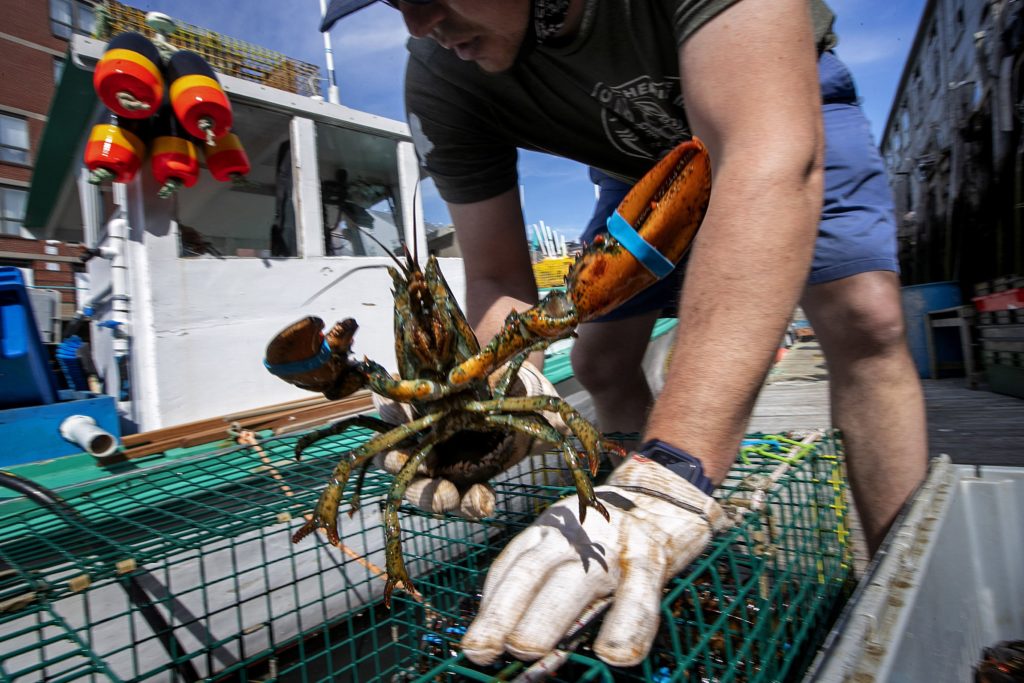 In this Friday, May 29, 2020 photo, Eric Pray unpacks a lobster on a wharf in Portland, Maine. Pray is one of many fishermen and farmers who have pivoted quickly to sell to directly to consumers after the coronavirus shutdown cut out usual sales options. (AP Photo/Robert F. Bukaty) 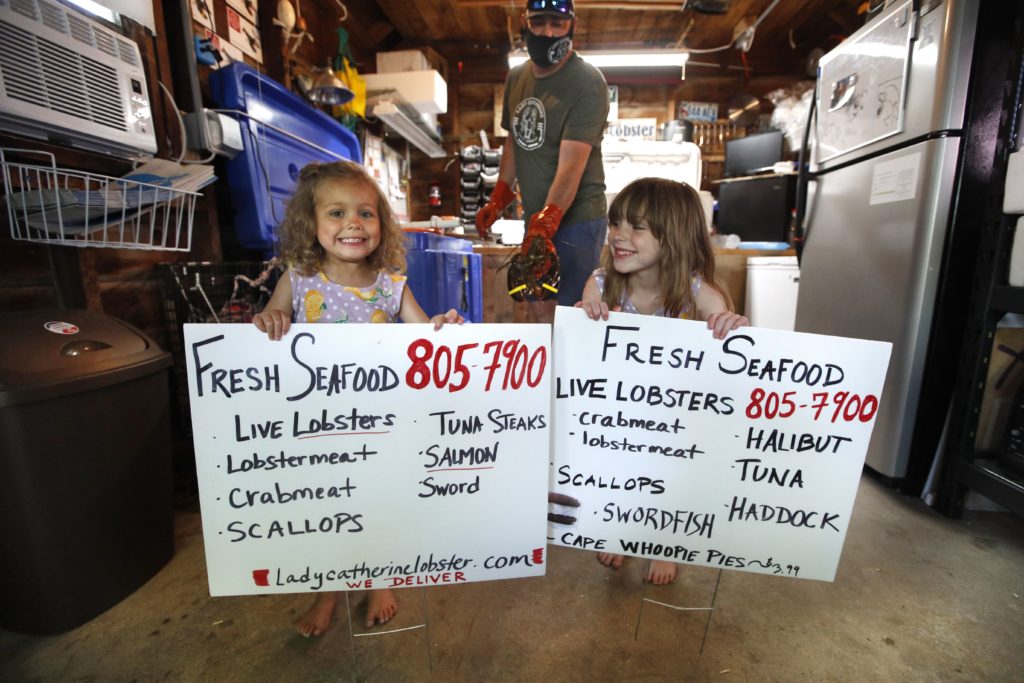 In this Friday, May 29, 2020 photo, Cora Pray, left, and her sister, Pearl Pray, hold homemade signs advertising their father's new business of selling his lobsters from his home garage in Portland, Maine. Eric Pray, background, is one of many fishermen and farmers who have pivoted quickly to sell to directly to consumers after the coronavirus shutdown cut out usual sales options. (AP Photo/Robert F. Bukaty) 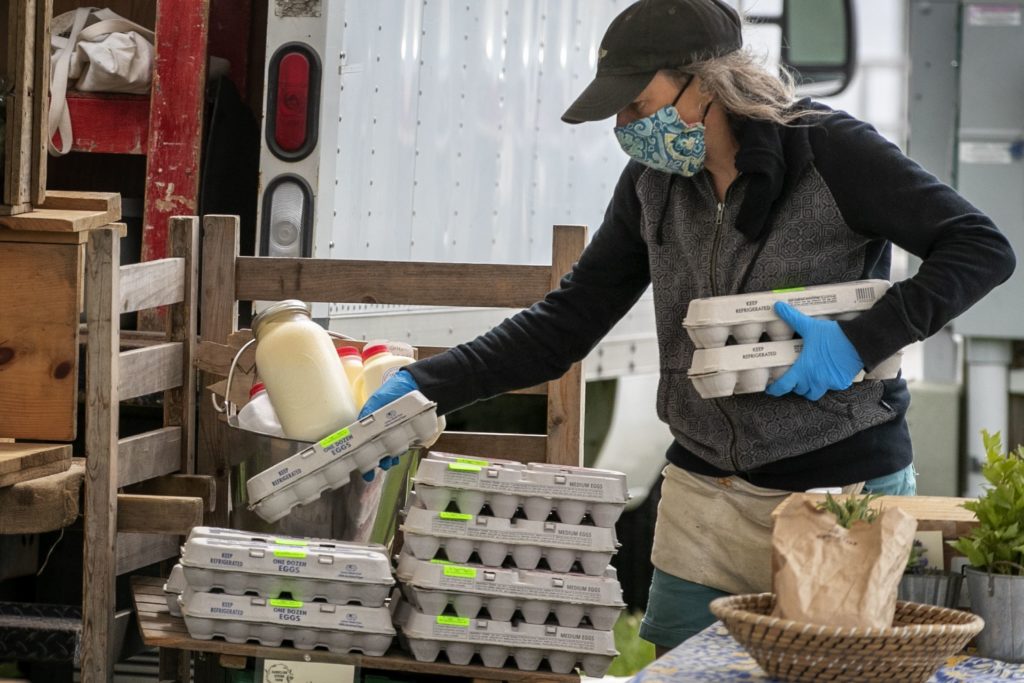 In this Thursday, May 28, 2020 photo, Beth Shiller of Dandelion Spring Farm stacks eggs at her farmer's market stand in Rockland, Maine. From meat to seafood and produce, farmers and fishermen have lost their restaurant business amid the coronavirus shutdowns and had to pivot quickly to sell more to stores or directly to consumers. (AP Photo/Robert F. Bukaty) 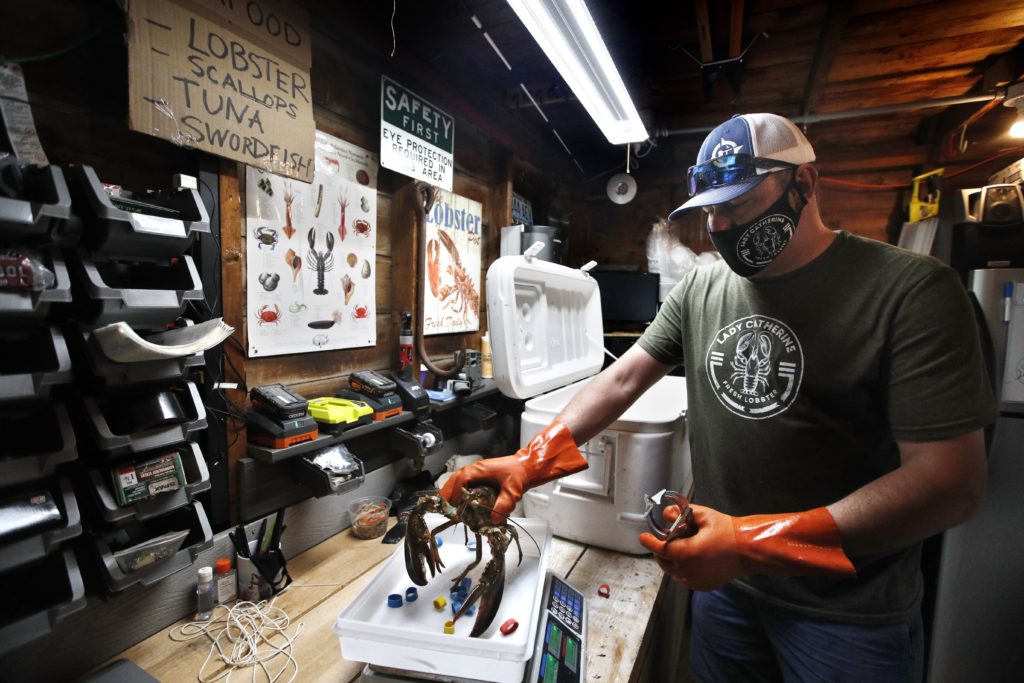 In this Friday, May 29, 2020 photo, Eric Pray weighs a lobster in his garage in Portland, Maine. The coronavirus shutdown has prompted Pray to that selling his product direct to customers. (AP Photo/Robert F. Bukaty) 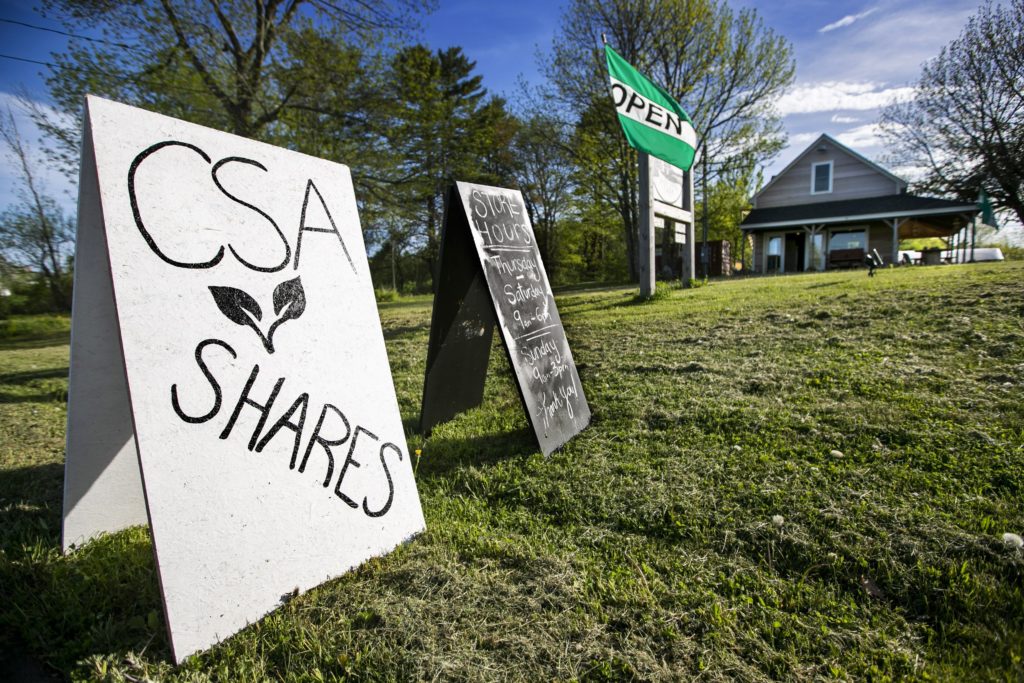 In this Thursday, May 28, 2020 photo, a sign advertises community supported agriculture shares at Spear Spring Farm in Warren, Maine. Spear Spring is one of many farms that have seen an uptick in the number of CSA shares sold to customers, most likely as a result to the coronavirus pandemic. (AP Photo/Robert F. Bukaty)

Eric Pray is used to shipping seafood all over the country. But since the coronavirus took hold, he has shifted his focus closer to home — selling lobsters from a homemade tank in his garage.

Pray, of Portland, Maine, is one of hundreds of fishermen, farmers and food producers who have shifted to a direct-to-consumer model amid the virus outbreak. The pandemic has stressed and sometimes disrupted supply chains, shuttered restaurants and changed the way consumers buy food, leaving some producers scrambling for a new way to reach their customers.

The farm-to-table movement in the United States has grown in recent years, as consumers have increasingly demanded locally sourced food. But in the past several weeks, the movement has grown out of necessity because some producers can’t rely on the complex web of processors, distributors and middlemen to get food to customers.

For some, the challenges have turned into opportunities — and new customers.

“When restaurants reopen, we’ll probably keep doing home delivery, because we’ve got a good base of customers,” Pray said.

But it’s not good news for many of America’s food producers. In late April and early May, U.S. beef and pork processing capacity was down 40% from last year, according to Jayson Lusk, head of the department of agricultural economics at Purdue University. Plants are now mainly back online but at reduced capacity with beef and pork plants running about 10% to 15% below last year, he said.

Some sectors have also suffered reductions in value, in part because the restaurants they normally rely on are closed. Live 1.25-pound lobsters were worth $6.74 per pound in the Northeast in April, which was 13% less than a year ago and 37% less than two years ago.

“The two biggest problems are facilitating distribution throughout the supply chain while protecting worker health, and revamping food demand in a way that avoids further disruptions,” said LaPorchia Collins, a professor in the Department of Economics at Tulane University.

Before the pandemic hit, Gunthorp Farms in LaGrange, Ind., had been selling most of its pasture-raised pork and poultry to upscale restaurants, including ones started by famed chef Rick Bayless, as well as to charcuterie shops. Then, practically overnight, restaurants and shops shut down, drying up the farm’s business.

The farm has been able to switch to retail packaging and selling the pork and poultry elsewhere, but it’s been far from easy, coming after endless hours of work by the family and employees, said Greg Gunthorp. That involved changing the labeling, adding bar codes, and cutting and packaging portions rather than selling in bulk.

“It’s been way, way too much work, way more changes. We made more changes in the first two weeks than we had planned to make in two years,” he said.

Templeton Farm, a small grass-fed beef farm in East Montpelier lost its biggest business — two restaurant accounts — when they had to shut down. But around the same time, the phone starting ringing with people seeking locally raised beef, according to farmer Bruce Chapell.

“Since then, our beef sales have been off the charts,” he said.

PrairiErth Farm in Atlanta, Ill., this season doubled its community-supported agriculture, where customers pay up front for produce throughout the season to 322 members, said Katie Bishop, one of the farmers. And it has about 75 on its waiting list, she said.

However, it’s unclear whether this new model will be sustainable once the coronavirus crisis passes.

Food products that depend heavily on restaurants, such as seafood, eventually need those customers back, said John Sackton, an industry analyst and publisher of SeafoodNews.com. But for now, selling direct to customers is a way to get a better price for those products than they would typically see, he said.

Pray, a Maine fisherman for three decades, said he’s managing to make ends meet so far, but it’ll be more of a challenge the longer restaurants and processors remain inaccessible. One of his customers, South Portland anesthesiologist Stephen Harden, said the appeal is as much about helping neighbors as buying great food.

“My wife and I sort of felt it was our duty to support locally as much as possible,” he said. “And of course, the food is much better quality.”