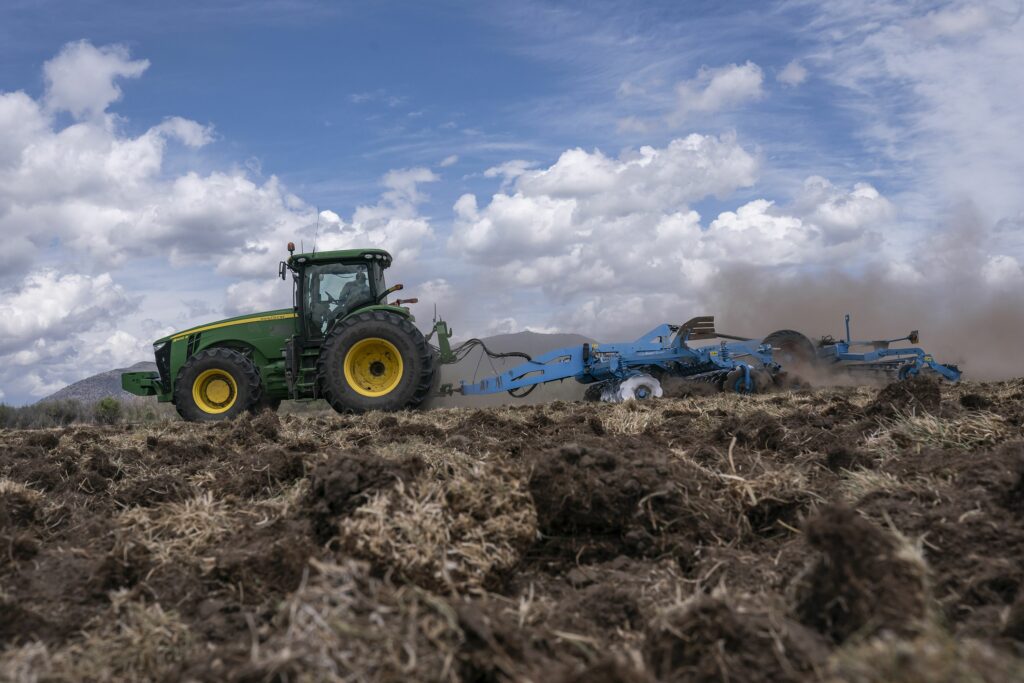 A tractor tears dried dirt on land that was unplanted this year due to the water shortage on Wednesday, June 9, 2021, in Tulelake, Calif. This summer for the first time ever, hundreds of farmers along the California-Oregon border who rely on irrigation from a depleted, federally managed lake aren't getting any water from it at all. Competition over the water in the Klamath Basin has always been intense, but this summer, because of a historic drought there is not enough water for the needs of farmers, Native American tribes and wildlife refuges. (AP Photo/Nathan Howard)

New Hampshire’s right-to-repair community is looking with interest at President Biden’s push for new rules that would let farmers repair equipment they have bought, although it’s far from clear what effect this might have here. “This is welcome news for farmers and consumers. … Manufacturers are making it harder every day for consumers to fix their products, and this results in a lot of gear being tossed in the scrap pile. It’s expensive and it’s wasteful,” said state Rep. Dave Luneau, D-Concord, who has sponsored two right-to-repair bills in past sessions that were killed in committee. “The right-to-repair legislation we’ve proposed in New Hampshire has always been met with resistance. But this order tells manufacturers that they need to do a better job for consumers, which could help with future legislation.”

In New Hampshire, as in almost all other states, legislators have repeatedly rejected efforts to require companies to provide repair manuals, specialized parts or other information and material to make it possible for owners and independent shops to repair everything from cell phones to appliances to landscaping equipment to automobiles. Supporters say that people should be allowed to fix things they have bought, especially since it can save money and keep items from being tossed into a landfill, while opponents raise concerns that third-party repairs are unsafe, violate manufacturers’ proprietary interests, and can even cause air pollution.

Only Massachusetts has passed any right-to-repair law, which is limited to certain aspects of automobile repair. It’s not clear how much of an effect a presidential executive order would have on New Hampshire’s effort, since it has not yet been issued and appears to be focused only on farming equipment such as tractors. Supporters of past New Hampshire right-to-repair efforts have mostly come from the tech community looking for support in efforts to fix smartphones and similar equipment.

White House press secretary Jen Psaki said Tuesday that Biden has told the U.S. Department of Agriculture and the Federal Trade Commission to work on rules allowing repair of farming equipment and “give farmers the right to repair their own equipment how they like.”

Such an order is expected to benefit farmers, who face expensive repair costs from tractor manufacturers who use proprietary repair tools, software and diagnostics to prevent third parties from working on the equipment.

Farmers have been among the most vocal supporters of the right to repair. They have long counted on being able to fix equipment in the field if it breaks. Modern farm equipment such as tractors is full of computerized and complex equipment that defies easy repair without information or proprietary parts from manufacturers; it’s not uncommon for companies to thwart owner repairs via end-user license agreements and copyright law. This forces farmers to pay for dealers’ expertise, which can raise costs and delay work.

Industry opposition has been reflected in committee hearings in Concord. In February 2019, for example, industry representatives warned the House Committee on Commerce and Consumer Affairs that at-home repairs could undo safety features on everything from smoke alarms to washing machines to anything with a lithium-ion battery, which can catch fire. The Department of Environmental Services also expressed concern, in their case fear that do-it-yourselfers would bypass pollution-control equipment on such things as lawn tractors.

Last month, U.S. Rep. Joe Morelle, D-N.Y., introduced what he calls the Fair Repair Act, which seeks to make it easier for consumers to fix their broken electronics. As a general rule, although there are exceptions, right-to-repair is supported by Democratic legislators and opposed by Republicans, who often describe it as a government intrusion on private industry.

(David Brooks can be reached at 369-3313 or dbrooks@cmonitor.com or on Twitter @GraniteGeek.)