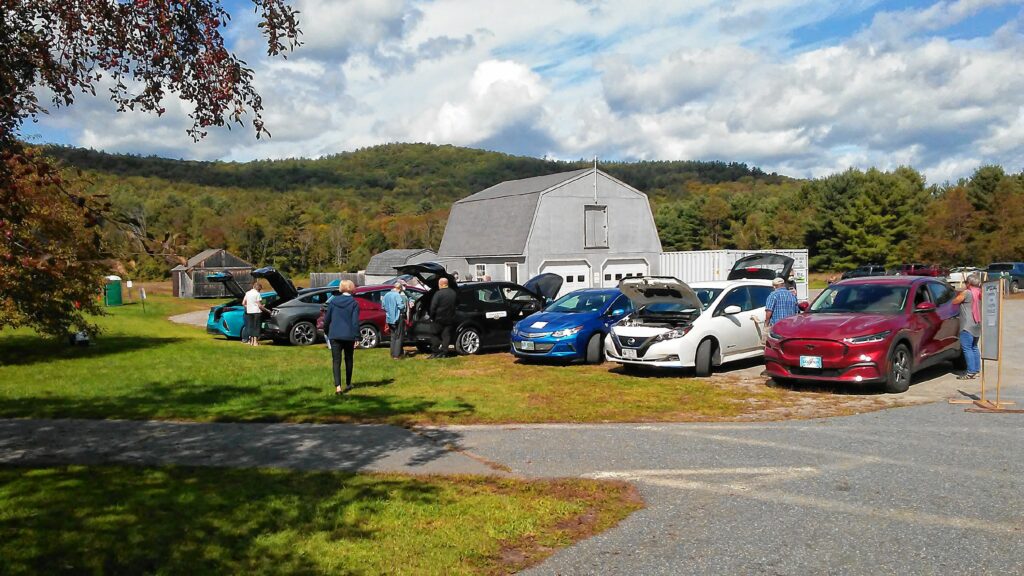 An electric vehicle showcase was part of the 2021 Cornish and Plainfield Energy Expo Sept. 11. Courtesy photo 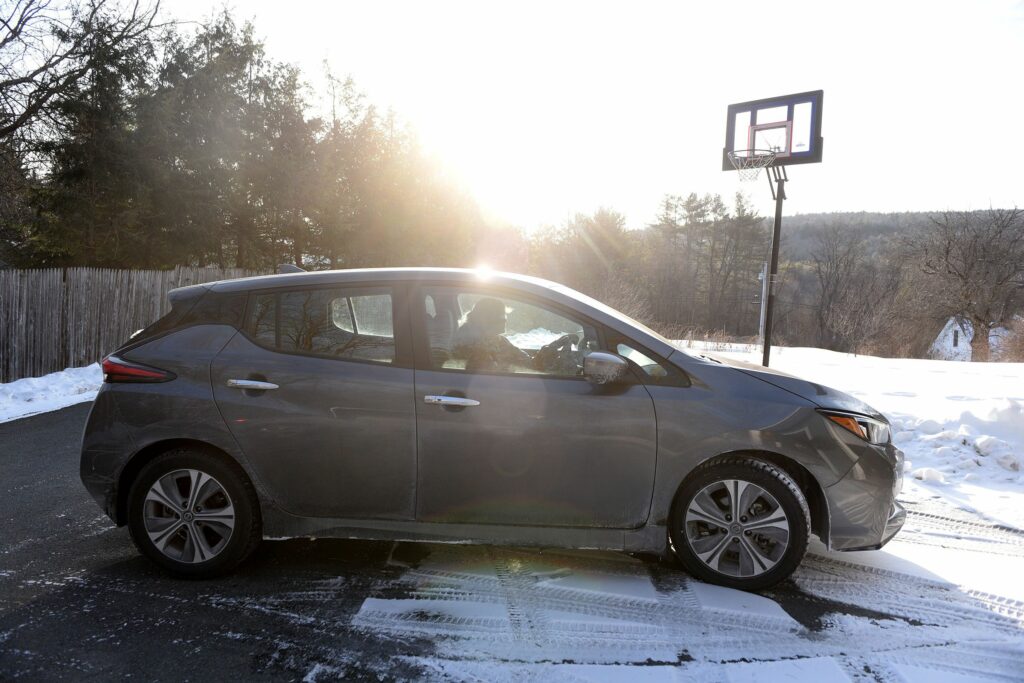 Julie Davis, of Lyme, N.H., heads for work in her new electric car on Wednesday, Feb. 3, 2021. ( Valley News - Jennifer Hauck) Copyright Valley News. May not be reprinted or used online without permission. Send requests to permission@vnews.com.

Next time you’re driving behind another car, don’t tailgate, but do study its bumper. Is there a tailpipe?

If not, the car is an EV (all-electric vehicle). And its driver is reaping big personal savings and contributing to positive regional economic trends — all while lowering the climate-change-causing greenhouse gases of which, in our region, fossil-fueled vehicles are the single largest source.

While still a long way from meeting goals like those in Vermont’s Comprehensive Energy Plan (50,000 EVs and plug-in hybrids, or PHEVs, registered in Vermont by 2025), such sightings are increasingly common in the Upper Valley. Vermont’s Orange and Windsor counties in January recorded 307 EVs and 263 PHEV, or about 68 per 10,000 people. New Hampshire EV experts estimate that New Hampshire Upper Valley communities have similar numbers.

Savings for individual drivers start with the greater efficiency of electric engines versus internal combustion engines (ICE), which waste about 70% of their fuel in heat. Even in New Hampshire and Vermont, where electric rates are well above the national average, EVs will give you 24 more miles for the same price as a gallon of gasoline, according to the nonprofit Drive Electric Vermont. Coupled with savings on maintenance — no oil changes, no spark plugs, no catalytic converters — EV drivers can save an estimated $3,790 over five years, based on annual usage of 12,000 miles.

On top of that are federal, state, manufacturer and utility subsidies that can lower the cost of an EV to equal to or below a comparable ICE vehicle. A side-by-side comparison this year by Drive Electric Vermont of Nissan’s all-electric Leaf with its gas-powered Sentra found that while the Leaf’s sticker price was $12,000 higher, incentives close most or all of that gap. In addition, for households in Vermont at or below 80% of median income, programs like Mileage Smart and others lower EV sticker prices even more.

“When you combine incentives and savings on operating costs and maintenance, it can add up to significant reductions in transportation costs per household,” Roberts said. “Particularly for more rural and lower-income households, transportation can be a big part of their monthly expenses.”

The numbers get even better if you’re generating your own clean energy like Jamie Hess, of New London, who bought his first EV in 2016 and a second one four years later.

“Getting an EV fit in with our goals of putting solar panels on our roof and getting electricity for free and then having cars that could use that electricity and take off all over New England,” he said. Even farther: this summer the family traveled by EV 1,500 miles roundtrip to Ohio for a memorial service.

“Getting there and back couldn’t have been easier,” Hess said.

“New Hampshire is not doing anything to incentivize electric cars at present. Even so, we’re seeing so many more of them on the road compared with just a year ago. People seem to be jumping on the electric car bandwagon without the need of incentives from the state.”

Businesses and municipalities benefit in the same way by converting their fleet to EVs. Lebanon is exploring converting more of its fleet to electric, starting with a Nissan Leaf it bought last year to share among departments, said City Manager Shawn Mulholland.

“It’s been pretty popular. People say they enjoy driving it. There’s been a bit of a learning curve in terms of charging,” he said. “For instance, last winter an employee ran out of power after driving a fair distance while using the heater, which drains the batteries. But we’ve all gotten better at watching the charge level and understanding when we need to charge it.”

The city has ordered an all-electric Ford F-150, which will come off the assembly line starting in 2022.

The transition to EVs offers benefits for the regional economy. EVs “place a downward pressure” on electricity rates for everyone, Roberts said. Since more charging takes place during off-peak hours, this means more electricity is flowing with no need for more infrastructure, which would allow per-unit electricity costs to drop.

In addition, transitioning away from fossil fuels to more efficient, low-carbon technologies will keep money in our regional economy.

“Vermont and New Hampshire are similar in that we don’t have a large fossil fuel (source) in state,” said Joshua Singer, program coordinator of Clean Energy New Hampshire. “So anything we are using, such as fuel oil or coal or gasoline, is imported. If we moved to sustainable sources, we could keep all that money in state.” Vermont spends an average of $2 billion a year on fossil fuels, 75% of which leaves the state economy, according to figures from the Vermont Agency of Commerce and Community Development.

What about the chargers to power these EVs? At present, nationally, 80% of EV charging is done at home, and most of that is through inexpensive “Level I” chargers that come with the vehicles and use standard house current and typically add 3 to 5 miles of “range” —how far the vehicle can go — per hour of charging.

Some homes, workplaces, municipalities are investing the $400 to $2,000 it can cost to add a “Level II” charger, which add anywhere from 12 to 80 miles of range per hour per hour of charging, depending on the types of charger and vehicle. Federal tax credits effective through the end of this year can offset up to 30 percent of the cost of buying and installing a charger.

Level III or “rapid” chargers are a big investment, costing on average $50,000, but offer drivers an experience closer to the “gas-and-go” expectations of ICE vehicles, delivering between 3 and 30 miles per minute of charging.

Search on an app like PlugShare.com, which maps EV charging stations, and you’ll see that more and more chargers at all three levels are popping up in Upper Valley communities in public and private settings, including a new Level III charging station in the West Lebanon Walmart parking lot installed by the Volkswagen subsidiary Electrify America, tasked with installing chargers throughout the United States with $2 billion from Volkswagen’s 2016 diesel emissions settlement.

New Hampshire and Vermont are also using other tranches of the VW settlement for their own Level III charger-installation projects. New Hampshire is focused on installing the rapid chargers along interstates that serve out-of-state visitors.

“It’s a matter of staying competitive,” said Chris Skoglund, program manager of the New Hampshire Department of Environmental Services. “Other New England states are moving ahead quickly on installing chargers. If New Hampshire doesn’t have them, all those EV drivers from out of state that might have come through are going to find other routes.”

Slower chargers also offer business opportunities, said Hess. He and other members of the New London Energy Committee have been talking to businesses in the town about the benefits of installing Level II chargers.

“If you’ve got a supermarket that has a charging station, that supermarket will show up on your PlugShare navigation map and a competing market won’t. And that goes for restaurants, hotels, any kind of amenities that people coming into town are looking for. So there’s a huge incentive to be an early adopter of EV charging. And I think a lot of businesses recognize this but aren’t ready to pull the trigger because they don’t think there are enough electric cars on the road yet. But obviously, that number is increasing every year, so we tell them they should install electric charging before the competition does because that’s how you get a competitive advantage.”

While a diner is enjoying a leisurely restaurant meal, for example, his or her car can also be filling up.

In Vermont, Roberts said, EV charging is prevalent in tourist destinations and lodging.

“Many of them have already put in charging. We know that there are more and more out-of-state EV drivers visiting Vermont as the vehicle range increases and charging infrastructure grows in Vermont”

Even with all these advantages, change is slow. To speed the pace, Upper Valley town energy committees have been engaging in EV diplomacy. This fall, energy committees in Bethel, Plainfield and Cornish held weekend fairs where people could meet EVs and their owners and ask them questions, and New London plans to hold a fair in 2022, when a Ford F-150 truck can be part of the display. The Thetford Energy Committee this year created a team of “EV and PHEV Ambassadors” who offer testimony and answer questions about their vehicles.

Strafford Energy Committee member David Lutz held a series of Zoom EV roundtables in September to talk to his neighbors about the ins and outs of EV ownership.

“I often get questions like, ‘How far can you go? How long does it take to charge? ‘How does that car do in the snow? Others dismiss EVs when they hear it can take 12 hours to recharge, but this doesn’t take into account that most people leave a car sitting 90% of the time and that there are other options for quicker charging. It really takes a re-education on things as people are used to pulling into a gas station and being on their way five minutes later compared to the myriad of opportunities one has to recharge at home, work, shopping, etc. The same goes for range questions; although my car only goes about 90 miles per charge, rarely do people drive more than 30 or 40 miles per day.”

“I think the reason we have seen EVs increase in our community is in part because of the EV fairs we have been doing every two years. It really helps people see what’s possible.”

Sums up Roberts, “The best thing we can do from a community perspective is to reduce our driving as much as possible through biking, walking, public transportation, and carpooling,” he said. “But the foreseeable future, we still think cars are going to be a major mode of transportation and getting as many of them to make the switch to electric will have many benefits.”