Heat pumps are here to stay 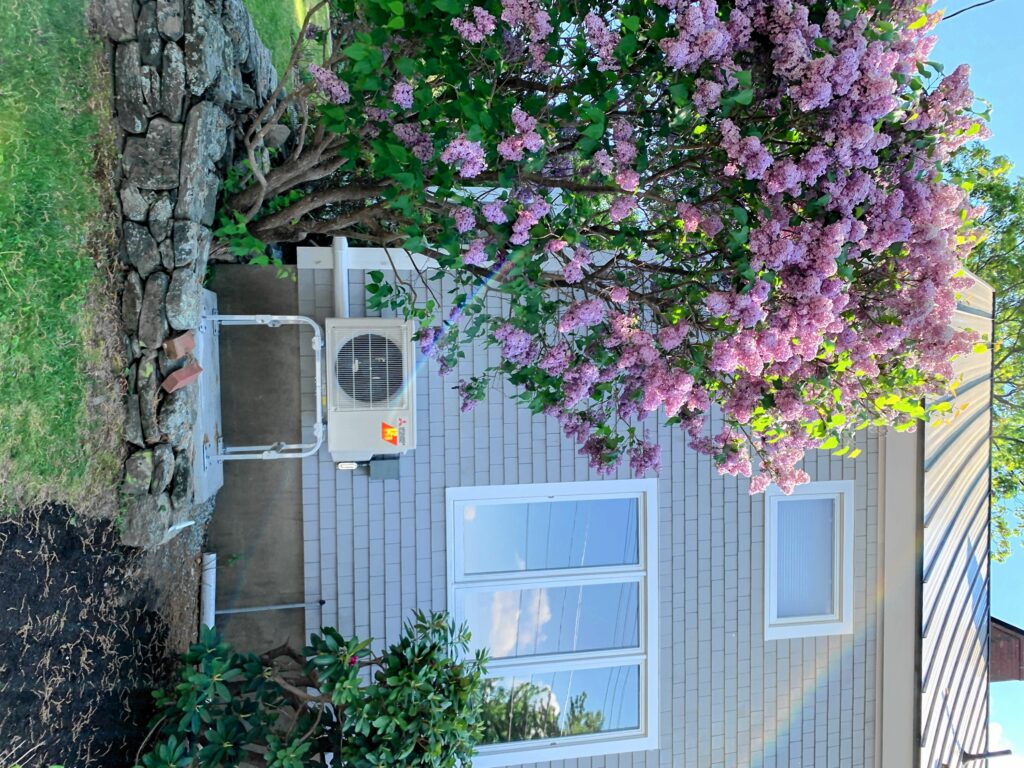 A heat pump installed by ReVision Energy. There has been a greater demand for the energy efficient devices to heat and cool homes in the Upper Valley. (ReVision Energy photograph) 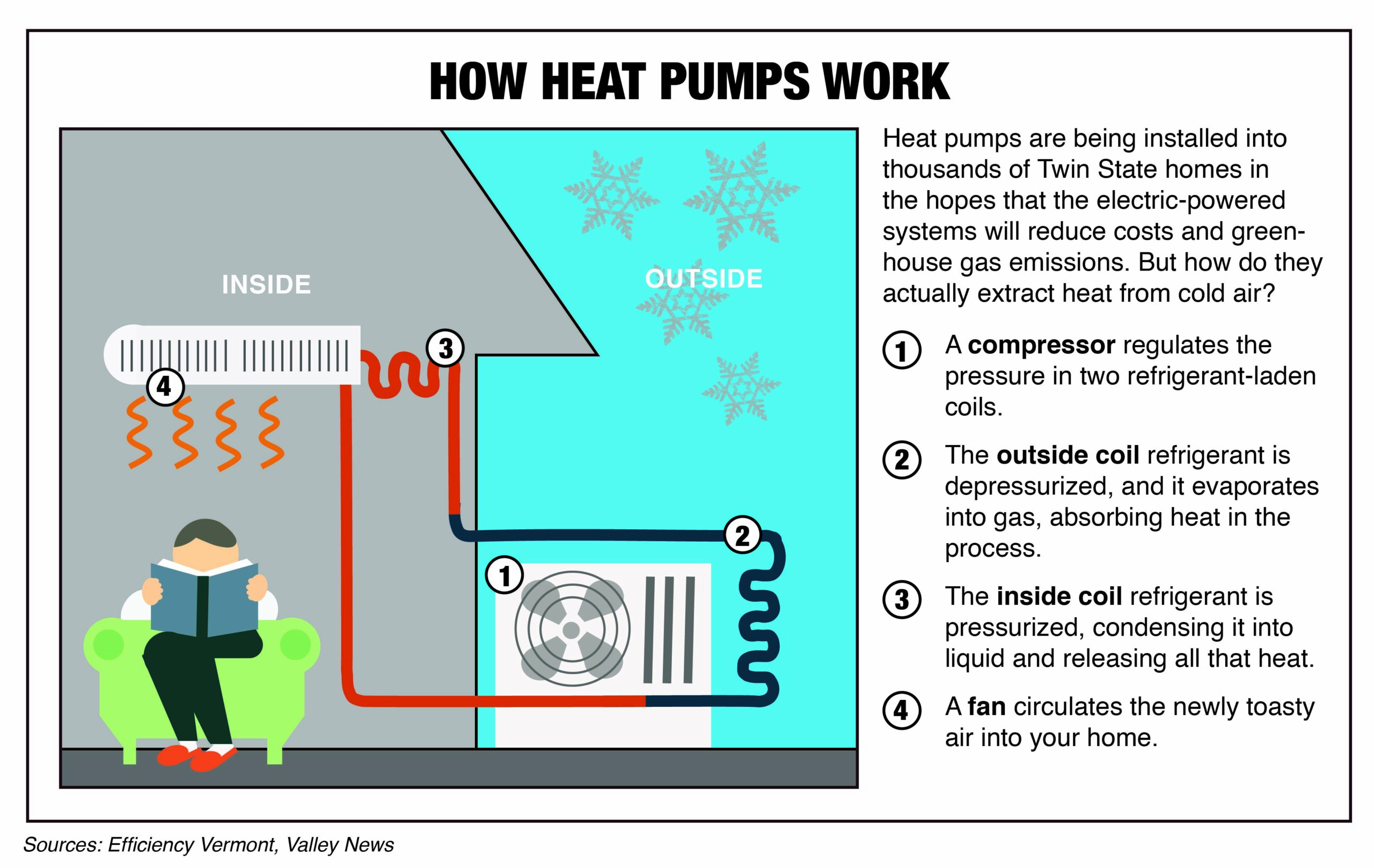 Imagine a refrigerator that increased threefold anything you put in it. Nice thought. But what sort of device multiplies by three what’s put into it?

Heat pumps do. Every BTU — or British thermal unit — of electricity used by a heat pump produces three BTUs of heat, or thermal energy. That’s 300% efficiency. Compare that with 90% or lower efficiency of heaters using fossil fuels, wood or electric resistance. This is true whether the heat pump is moving heat into your home in winter or out of your home in summer, or heating your water as heat pump water heaters do.

While this might seem too good to be true, it isn’t. Technological advances over the past 15 years have made heat pumps workable for climates even colder than ours. Although heat pumps are still more expensive upfront than most conventional space heaters, their low fuel costs pay back that investment, particularly as fossil fuel prices rise.

In addition, rebates can shave off a good portion of the upfront costs. Efficiency Vermont offers Vermont residents rebates of up to $6,500 for heat pumps, and New Hampshire utilities may be able to restore the rebates they previously offered thanks to HB 549, signed earlier this year, which restores funding and the framework for the NHSaves energy efficiency programs.

In the almost 10 years that Building Energy has been installing heat pumps, they have gone from a novelty item to mainstream, said Brent Mellen, who operates the company’s White River Junction office.

“At first it was the early adopters, the ones who already had solar and were looking for even greater extra efficiency,” he said. “Then slowly as the years went on, people became more aware of them. People had them in their house and other folks see them and get interested, and it sort of builds, and I would say we’re at a point where now over the last two years demand has been very high. There’s a pretty long waiting list, and the crews are scheduled pretty far out.”

The past two years saw particularly sharp increases as the pandemic prompted people to focus on home improvement and comfort, “plus the realization that heat pumps really do work well and that we do need some cooling in the summer,” Mellen said.

“Air source heat pumps have become exponentially more popular in recent years,” agreed Jill McLaughlin, digital content manager for ReVision Energy, an employee-owned business with locations in Maine, Massachusetts and Enfield. “This is due to a combination of factors; New England summers have been getting noticeably warmer, so more people are looking for something that can provide air conditioning as well as heating — and heat pumps are two to three times more efficient than a box window AC unit. And people are trying to get away from fossil fuels, and heat pumps use electricity, and can therefore use solar energy. Heat pumps and heat pump water heaters play key roles in what we call the ‘100% Solar-Powered Home’ — a home in which everything is run by electricity that is generated through a solar array.”

Even if you are buying your electricity, McLaughlin said, heat pumps’ operating costs are “equivalent to paying $1/gallon for heating oil.”

Wide adoption of heat pumps is good news for the planet, said Matt Christie, a Strafford resident who consults utilities and government agencies about energy efficiency and decarbonization, with an emphasis on heat pumps.

“When it comes to reducing greenhouse gases produced by home thermal systems, heat pumps are the only viable option, especially as we clean the grid” and get a larger percentage of our electricity from renewable sources, Christie said.

What wizardry is involved in these devices? Let’s go back to that aforementioned refrigerator — a wonder of physical science sitting right there in our kitchen. Heat pumps and refrigerators use essentially the same “refrigerant cycle”: refrigerant is circulated through a set of valves and tubes, forcing it to turn alternately into gas and liquid and picking up and then throwing off heat in the process.

One key is that forced expansion is able to make the refrigerant colder than the outside air, even when it’s 10 below out. Because (as the Second Law of Thermodynamics tells us) heat moves from warmer areas to cooler ones, that frigid outside air transfers heat to the even-colder refrigerant. The coolant is then compressed, which concentrates the heat energy and raises the refrigerant temperature; the refrigerant is then moved to the indoor unit of the heat pump, which then passes air over the hot coolant, increasing its temperature to accommodate the thermostatic call for heat inside the home.

The first heat pumps date back to the 1930s, and the 1970s energy crisis brought a surge in popularity. But those models only worked in milder climates.

The big breakthroughs that took place over the past 15 years made them work in cold climates as well. While older models were either fully on or completely off, new ones have variable-speed motors that offer continuous heat transfer fine-tuned to the specific heating and cooling needs.

But after thousands of years of burning stuff to stay warm, heat pumps do take some adjustment. Rather than releasing a sudden blast of heat, heat pumps offer a steady stream of 90- or 95-degree air. They work in leaky homes, but they work better in well insulated ones, Christie said.

“There are massive benefits to getting your (home heating) envelope right. It means you can have a smaller system, with lower upfront costs, and you’ll have better comfort and faster ‘catch-up’ speeds in bringing the building to a comfortable temperature.”

In addition, where you place units in your home makes a big difference, Mullen said. In a compact, multi-story home with a mainly open plan, a single unit on the ground floor might do a great job of warming the space, but not help with cooling needs, which are greater on top floors. A small additional upstairs unit might be called for.

“There are all kinds of nuances about placing a heat pump, so it’s good for folks to do as much show-and-tell as possible when thinking about them — talk to other folks who have them, and find patterns in how people use them,” Mullen said.

For more information on energy efficiency and help for people of all income levels, go to vitalcommunities.org/energy.